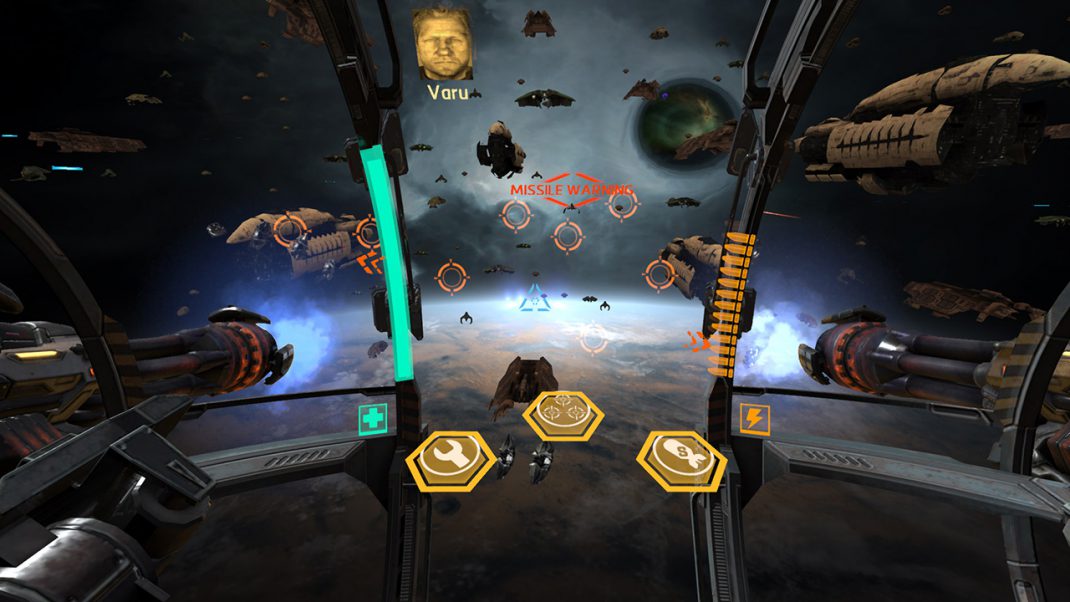 8 December 2016 – London, UK – CCP Games is thrilled to announce that Gunjack 2: End of Shift, the sequel to one of the best-selling VR games of all time, Gunjack, is out now and available exclusively on Daydream, priced at $12.99.

Gunjack 2 is developed by CCP Shanghai, which has quickly become world renowned as a leader in the creation of high quality mobile VR experiences. Their previous release, Gunjack , has sold through more than 500,000 units across the four platforms on which it was released – Samsung Gear VR, Oculus Rift, HTC Vive and PlayStation VR. Gunjack was praised for its breakthrough graphics when it launched on Gear VR in November 2015 and with Gunjack 2, the development team have again raised the bar for mobile VR games.

Gunjack 2: End of Shift is a fast-paced, space shooter set in EVE Online®’s science fiction universe, built from the ground up for mobile VR using Unreal Engine 4. Everyone fights in New Eden. Some fight for power. Others for money. But out on the fringes of known space, most fight simply to see another day. Far from the comforts of civilization, the vast mining rig, Kubera, is home. As a turret operator charged with defense of the rig and a formidable arsenal at their disposal, players must protect the Kubera and its precious cargo from bandits trying to blow the rig apart.

Gunjack 2: End of Shift seamlessly integrates intuitive motion controls with intense, full-immersion action to become the ultimate mobile virtual reality experience. Players use the Daydream controller to aim and shoot down swarms of enemies, strategically deploy special weapons, and activate an energy shield to survive the most dangerous situations. The game will also feature procedural daily missions, ensuring endless replayability. Cinematic storytelling is also central to Gunjack 2, cut-scenes featuring the mining rig’s crew immerse the player in the life of danger for those in the Outer Ring of New Eden.

“The impact of VR as an entertainment medium can really only be grasped when experienced first-hand and with Daydream, the goal of being able to deliver high quality mobile VR to the broadest possible audience feels within reach,” said Hilmar Veigar Pétursson, CEO of CCP Games. “We’ve designed Gunjack 2 to be a showcase for Daydream and we’re excited to demonstrate the impressive capabilities of Google’s new VR platform.”

“Pushing beyond what we achieved with the original Gunjack has been at the forefront of our minds for Gunjack 2 on Daydream,” said Jean-Charles Gaudechon, executive producer of Gunjack 2: End of Shift. “Collaborating with Google has been an incredibly rewarding experience and with Gunjack 2, we’re able to deliver a true leap forward in mobile VR gaming.”

For more details about the game, please visit www.gunjack2.com.