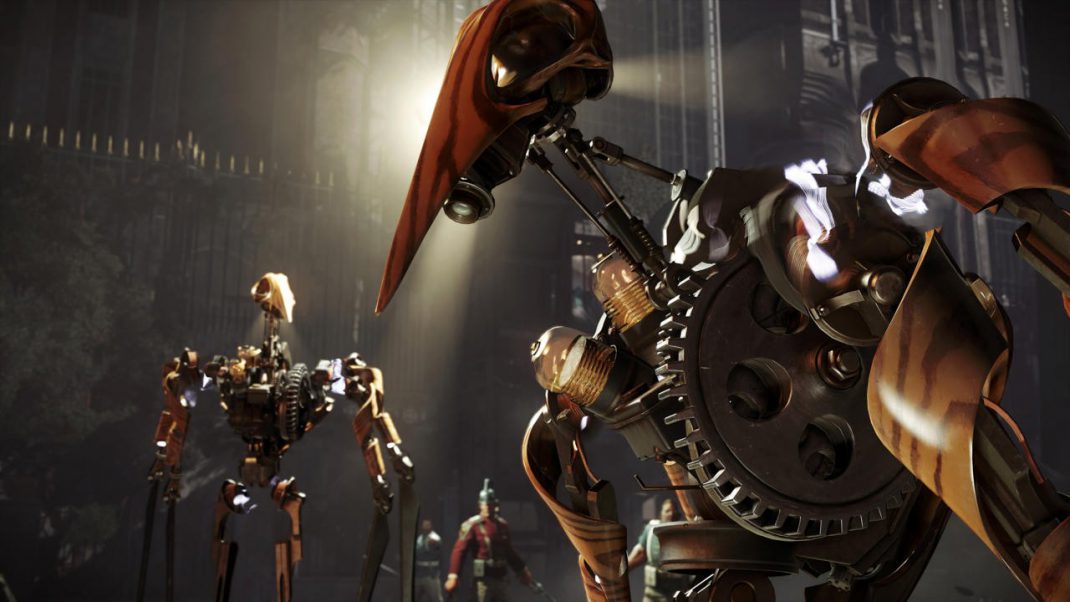 I am a big fan of Arkane Studio’s 2012 Dishonored, so when the 2016 sequel became available for the PC, I quickly jumped on it.  Dishonored gave me everything I wanted in an assassin style game:  multiple ways to carry out the assignment, multiple paths through the level, and an up-gradable character that changes depending on how you want to play the game.  Dishonored 2 is that much, plus more.  Arkane Studios took the safe route in developing their sequel, and I am fine with that.  Dishonored 2 gives us more of the same, but with some small differences that makes Dishonored 2 better then the original, but not earth shattering.

Set fifteen years after the original story, Dishonored 2 sees the Empire of the Isles being led by an adult Emily Kaldwin.  Emily is still protected by Corvo Attano, who is also training her in the way of the blade and assassination.  However, not all is well within the Empire, as there is an individual who has been dubbed the “Crown Killer” roaming the streets and eliminating Emily’s most outspoken critics.  The population of the Empire have begun to talk and distrust the Empress, fearing that she is using the “Crown Killer” to silence her enemies. 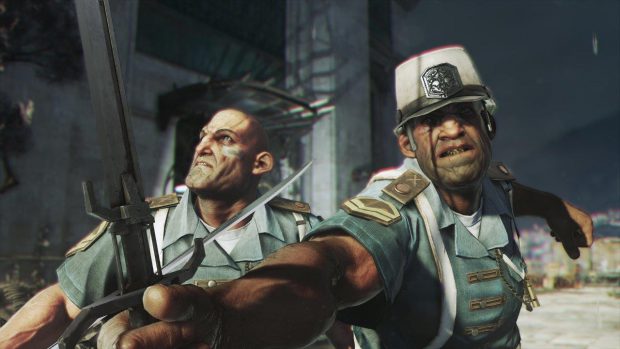 The game opens with Emily and Corvo preparing to commemorate the fifteenth anniversary of Jessamine Kaldwin’s assassination.  During the ceremony, the Duke of Serkonos, Luca Abele, interrupts the proceedings by offering Emily a gift, the gift of family.  Duke Abele produces Jessamine’s long lost sister, and claims that the sister is the true Empress of the Isle now.  The long lost sister is none other then Delilah Copperspoon, somehow making her way back from the void that Daud had imprisoned her.  This revelation immediately begins the coup in earnest, and you are forced to chose who you will play for the rest of the game; either Corvo or Emily.  The character you do not choose becomes imprisoned and you escape your own fate in order to set out and to take back your throne from Delilah.

Ok, so the story isn’t that much different from the first game, when you really boil it down.  You are forced out of Dunwall, hunted by your former soldiers, and are trying to recover something that was lost to you, this time being the character you didn’t choose in the throne room and leadership of the Empire.  I don’t know where Dunwall finds their soldiers at, but they have the absolute worst idea of what loyalty is.  The story progresses the same no matter who you choose, but the game will change up the small details depending on whether you play as Corvo or Emily.  I do love how Arkane Studios made this choice a thing, that way anyone can play this game as a protagonist that speaks to them.  Each character has different game play mechanics as well, but we will talk about that later.

The story to Dishonored 2 is very well done, but it does make the assumption that you played through both The Knife of Dunwall and The Brigmore Witches dlcs of the original game.  This makes the story of Dishonored 2 feel much more a part of a larger story, but you may need to accept a few things on faith story wise if you didn’t finish either of the dlc.  Like the last game, the choices you make affect the story in terms of low or high chaos.  The more you kill, the more chaotic the world becomes and the darker the ending you will get.  While you get to choose how you want to go through the game, there is definitely a lean on the non-killing approach being the “nicer” way of doing things. 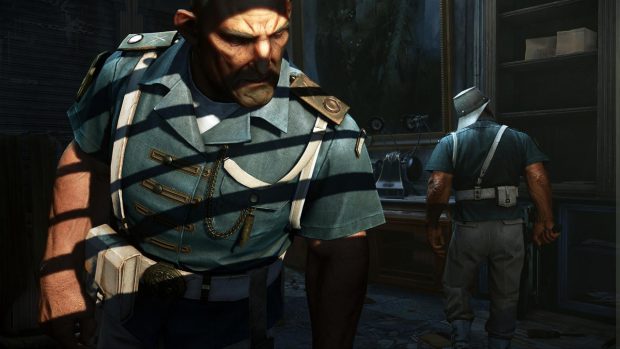 Dishonored 2 is more of the same from Dishonored, with some minor changes that makes the sequel feel much more complete then the original.  First, each character is completely upgrade-able to fit your desired play style, just like before.  However, each character has separate abilities and skills that makes each one play just a little differently.  Emily’s Far Reach works in a similar fashion to Corvo’s Blink ability, but Emily’s Domino ability is far more fun to use for me then Corov’s Bend Time ability.  Domino allows you to connect individuals together, so the fate that befalls one will be felt by the others.  This is great in subduing multiple enemies at once, and can be really fun if you chain it’s use with Emily’s clone ability as well.

Dishonored 2 also adds in a non-lethal combat ability that literally saved me hours of time.  I played through Dishonored trying to do the non-lethal pathway, and would constantly have to restart if I became discovered and cornered and was out of sleep darts.  This new ability allows you to block and counter, just like the original, but with a choice of whether you stab your enemy or choke them out.  Discovery and lack of sleep darts no longer meant a restart for me, I could just block and choke then continue on with my journey.

The other big change is the type of plague you are dealing with in Karnaca.  The plague is no longer a threat and the weepers and the rats won’t bother you like before.  However, you now have to deal with the blood flies, which I think I hate more then the rats.  Blood flies gather around hives, and become very aggressive the closer you get to the hive.  You can take these out quickly and easily using explosive bolts, but they become a huge pain if you don’t see them quickly enough, or are out of bolts.

The rest of the game play for Dishonored 2 is pretty much the same from Dishonored.  Sure, the levels are designed differently, especially the Clockwork Mansion mission, but really the point is to move through the level the way you chose how to play, collect bone charms and runes, and finish off the target character.  The game play experience vastly changes depending on your own choices with the stealthy option being the more rewarding, in my own opinion.  I found myself restarting levels or checkpoints, just because the game did not go the way I wanted it, because I got caught sneaking around.  The estimated length of Dishonored 2 is between 12-16 hours in length, but I can see that being extended  by restarts if you are going for the Ghost or Clean Hands achievements.

This game does what it needed to do in terms of game play, which is give me more of what I got in Dishonored but make some improvements in the areas that I felt were lacking in the original.  Dishonored 2 does nothing ground breaking here, but does what it needs to do correctly in order to feel like Dishonored, but still has its own soul. 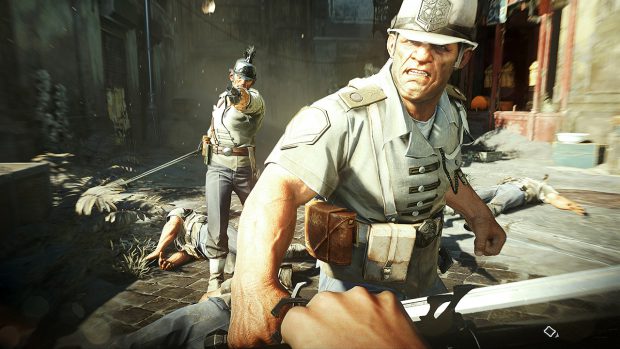 For those of you that have read my PC game reviews in the past know that my system was lackluster at best.  Well, that has all changed now that I was able to purchase a brand new gaming PC, and Dishonored 2 was it’s first test.  Let’s start the conversation by talking about the elephant in the room, the frame rate performance.  I had read about this issue prior to running Dishonored 2 for the first time, and was very worried about it.  However, I can honestly say that my experience in game was absolutely flawless, and that I experienced little to no frame rate drops during my time with the game.  I ran Dishonored 2 on a PC that had a Core i7-6700K Quad Core 4.0 – 4.2GHz, GeForce GTX 1070, and 16GB of Ram and it ran extremely smooth and looked great.  Arkane Studios is fully aware of the performance issue, and have released one patch already trying to fix it for everyone.  If you are worried about performance, my advice is to follow this story and wait until it is confirmed that Arkane has fixed it.

As for the rest of the aesthetics of Dishonored 2, the game is great looking in Ultra thought the textures, while still being above standard, didn’t match up to other games on the market.  The cities feel much more alive to me then they did in the original game, which is fantastic.  The new plague, the blood flies, apparently didn’t scare the residents of Karnaca off like the Weepers did to Dunwall.  The lighting is top notch, giving the city and locals a mood that I felt added to the story telling.  The voice acting works, but can feel stilted in some cases.  I am not sure if this was due to the actor’s performance, or the actor having issues with the chosen dialogue, but it isn’t that big of a deal for me.  The production is top notch, with just a few hitches along the way.

Dishonored 2 is a fantastic game that truly allows you to play the game your way.  You get to chose your protagonist, your style of play, and your pathway through the missions.  This is flexible game play at it’s best.  The worst part of Dishonored 2 is that it may not feel different enough from the original to really give you a unique gaming experience.  It ultimately is more of the same, but with a few tweaks and changes to make the game play better.  As a fan of Dishonored, this was enough for me to enjoy my time revisiting the Empire of the Isles.  The game is beautiful on the PC, and the music and voice acting worked great, most of the time.  Your biggest concern should be the performance issues that have hounded Dishonored 2 from the beginning.  While I did not run into these issues personally, they are out there and you should be informed before you buy.  Arkane is working on a fix, but last I heard people are still having issues getting the game to a playable state on their PCs.  Dishonored 2 is available now on PC, PS4 and Xbox One.