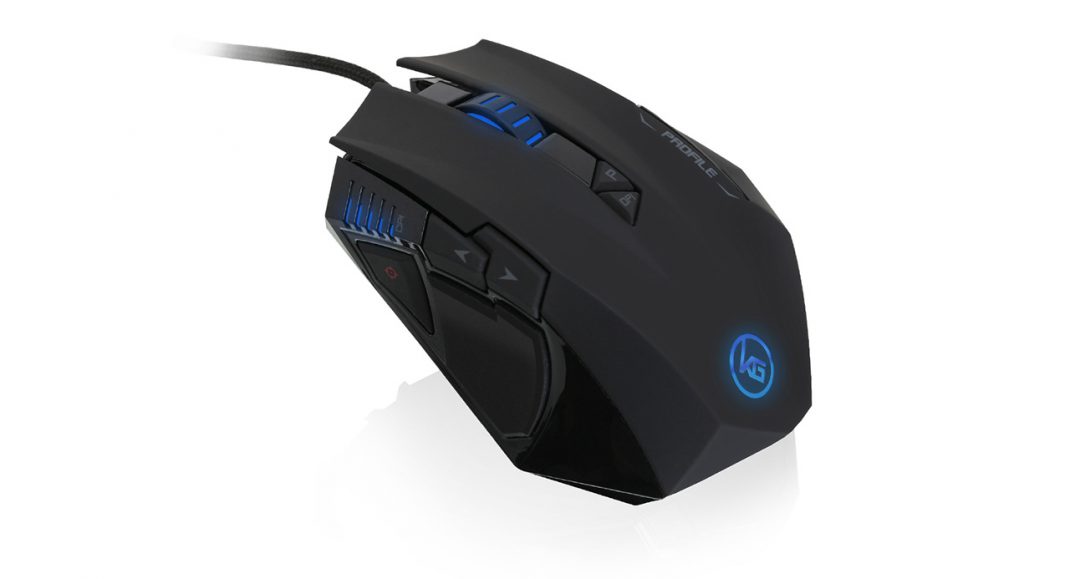 About a month ago, I reviewed IOGear’s Symmetre mouse, and was somewhat not impressed.  I wasn’t a fan of the design nor the feel of the mouse, even though the performance was pretty good.  Today, I get another crack at a mouse from IOGear, this time it’s the Retikal Pro FPS Gaming Mouse.  Will the Retikal fare better then the Symmetre in my hands, or will it earn the same fate of being banished to the bottom of the “Extras” drawer?  Let’s find out with my full review.

The Retikal is designed to be a much more traditional mouse then the Symmetre, which means it feels proper in your right hand (as long as you are right handed).  The Retikal comes with 9 programmable buttons, one of which is featured as a sniper mode button.  Essentially, this button will slow down the mouse speed to allow you to focus in, but it doesn’t slow down the game so unless you are already in the vicinity of the head, slowing the mouse down won’t do you much good.  The Retikal can hit up to 5000 dpi (1000 more than the Symmetre) and can switch dpi on the fly, as well as profiles with just a button press.  The Retikal also features a USB 2.0 braided cable, which I do love.

So, my biggest negative with the Symmetre was the feel of the mouse, and unfortunatly that is also my biggest negative with the Retikal.  While the Retikal feels initially better in my hands then the Symmetre did, it never once matched the feeling of some of the higher end mice that I have owned over the years.  I literally felt like I could snap the Retikal in two with one hand.  The Retikal is light and flimsy feeling, has almost no weight to it, and does not feel sturdy enough to handle some rough gaming hours.  This is all based on my own preferences when it comes to the feeling of a mouse, but there it is.

The Retikal looks slick, with the logo glowing blue on the palm rest and the wider frame of the mouse to fit your hand.  There is a nice pad near where your thumb rests that’s made out of a slip proof material, which increases your grip on the mouse.  Right above your thumb is where the sniper button is located.  While I didn’t really like that button as a feature, it is placed in the best place possible.  Just don’t accidentally hit it while you are playing, you will get a nasty surprise.  Overall, the Retikal is a clean looking mouse, but does not do anything special either.

So I took the Retikal out on few gaming dates with my new PC, and saw what it could do.  The last week saw some increased play time in H1Z1:  King of the Kill, World of Warcraft, and some Battlefield 1.  While the performance was decent, I could not get rid of the feeling that I was going to break the mouse, and absolutely hated the weight of the Retikal.  Maybe I’ve gotten too use to my Bloody mouse, but the Retikal did not feel natural in my hands, though it performed pretty well.  I was never happy with the mouse sensitivity that I set it to, and would switch dpi on the fly a few times more then I’m used too.  I tried out the sniper button, but did not like the immediate slow down of my mouse.  It’s a good idea, just one that I would never use.

I know it sounds like I’ve been rough on IOGear these last couple of reviews, but the market is a tough place and there are a lot of mice out there.  Finding one that truly fits your play style and sense of touch can be tough, and once you found your range then anything outside of that just feels off.  The Retikal is an entry level gaming mouse, priced at roughly $26.00, so the investment isn’t high if you are looking to use it.  The Retikal is a decent mouse for the price tag and will perform well enough.  There are better mice out on the market, though not many under $30.  This one’s a toss up for me, the Retikal is pretty much the definition of an average mouse, so if you need one for under $30 I would say check it out.