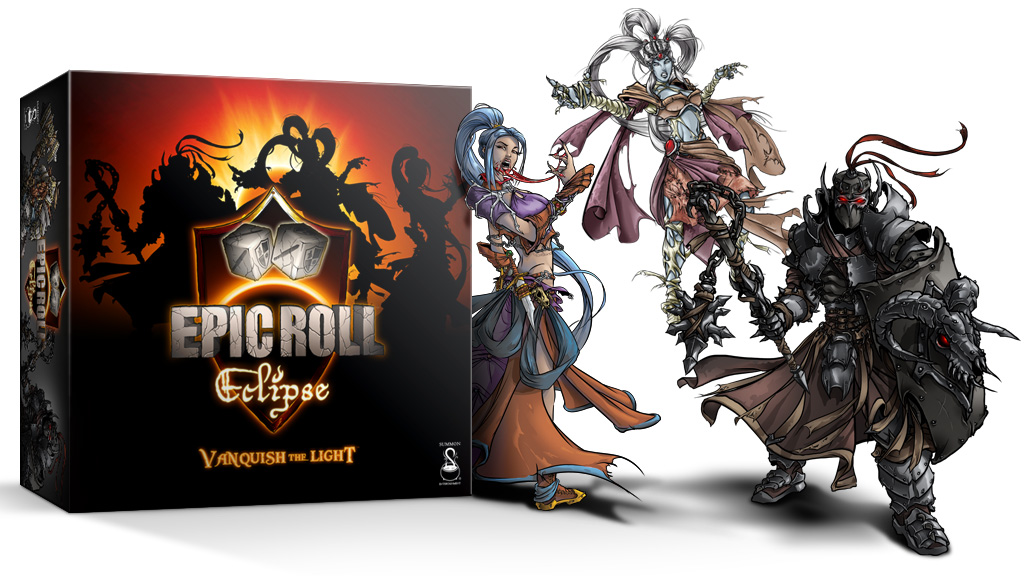 October 10, 2016 – With over two weeks still to go in its Kickstarter campaign (Back Us Here), Epic Roll: Eclipse has passed 50% funding, and the owners are optimistic about the future of their first crowdfunding project. Jon and Matt Nord from Summon Entertainment talked about the project thus far, and their plans going forward.

Matt: “So far we’re seeing a lot of support from Epic Roll owners, and players we’ve met at game conventions over the past year – Gen Con for sure, but also KublaCon and Strategicon. It’s pretty cool when backers tell you they played a round or saw a demo of Eclipse months ago, and they’ve been waiting for the Kickstarter to pop up. The campaign is putting Eclipse and Epic Roll in front of new audiences as well. We’re seeing a strong number of Canadian and European backers that we otherwise would have had a hard time reaching.”

To date there have been three stretch goals announced – one social stretch goal giving backers a bag in which to carry the game or draw tokens from, and two more lurking beyond the project’s funding goal. The first of these provides backers with “Magic Item” cards they are able to choose for their characters at the beginning of each game. The second stretch goal unlocks two additional characters – a zombie called “William the Undying” and “Bundi”, a hammer-wielding Dwarf. Both characters include their own die and ability cards, along with unique magic item cards.

Jon: “Eclipse got great reactions from attendees at Gen Con. Players were most excited about the ways it expands the original game, with a higher player count and more direct effects against opponents. That’s the plan with Eclipse and our future Epic Roll expansions – providing fun new content, as well as more ways to play with your existing collection. The initial stretch goals we chose allow players to customize games with additional strategy and complexity, and challenge players with unusual characters existing outside the dynamic of the core champions. The result is more replay value for veteran board gamers.”

We’ll keep an eye on this project as it develops. By the time we’re watching horror movie marathons and handing out candy, Epic Roll: Eclipse may give gamers one more reason to celebrate.

For more information on the Epic Roll series, artwork, and product photos, visit the http://www.epicroll.com/