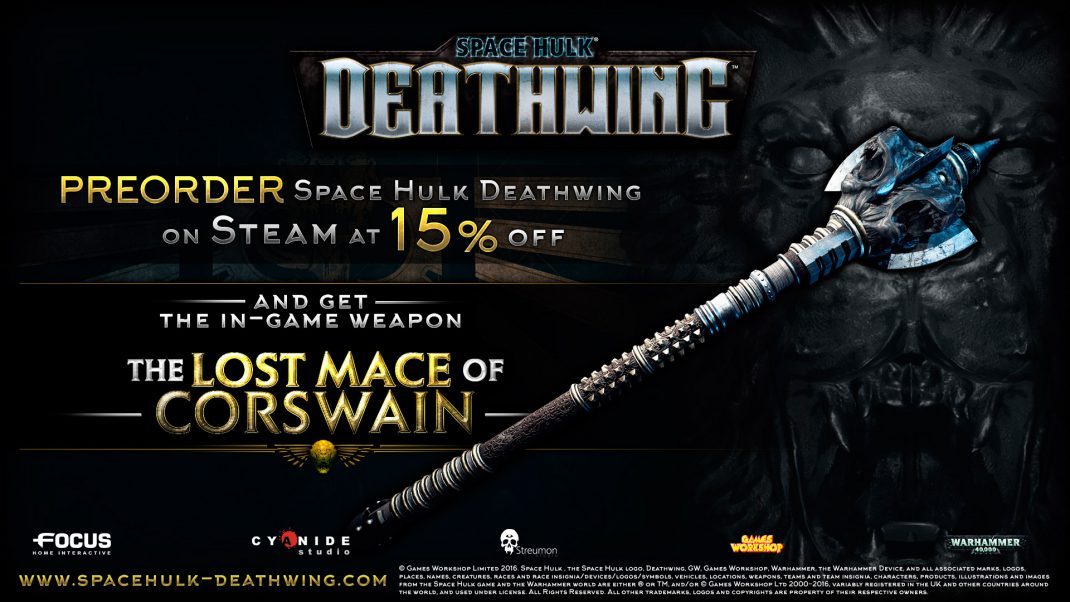 October 3, 2016 – Space Hulk: Deathwing, the upcoming first-person shooter set in the Warhammer 40,000 universe, showcases some of its big guns in a new video! Space Hulk: Deathwing is the adaptation of the Space Hulk board game, developed on Unreal Engine 4 by the team behind E.Y.E: Divine Cybermancy, Streum On Studio. As the Terminators from the Dark Angels’ first Company purify the Space Hulk from the Xenos menace, witness the gunplay of with a selection of the available weapons, the environments and the atmosphere of the upcoming game.

Deathwing Terminators carry some of the biggest and most powerful weapons available in the Imperium. Even the smallest of the weapons they employ, the Storm Bolter, is typically a mounted weapon, firing rocket-propelled shells in place of bullets. The trailer showcases some of the deadly assortment of firearms, melee and energy weapons you will wield: the classic Storm Bolter is here of course, alongside Redemption, a unique spread-shot variant capable of ricocheting shots around corners. The Heavy Flamer can lay fire on walls and floors, cutting off choke points and punishing those who dare cross the line. The Storm Shield can withstand heavy enemy fire, and the Thunder Hammer carries so much latent power that striking it upon either surface and flesh causes an area-of-effect shockwave around the point of impact.

The labyrinthic Space Hulk that you will be exploring is dark and dangerous, infested by Xenos. At any time, Genestealers can ambush you, making use of the walls, floorspaces, and ceiling vents. The once-dormant Genestealers have made the Space Hulk their home, and will use every advantage they can get to strike you and your team from your blind spots, and pounce on you from above. True to their swarm-like social structure, they will behave accordingly and may even fall back to regroup, in order to attack again in greater numbers.

Don the Terminator power armor, take up your Storm Bolter, and bring glory to the Emperor in Space Hulk: Deathwing when the game launches in November 2016 on PC!

Pre-order now the game on Steam and get 15% off the price of the game and one in-game weapon – the Lost Mace of Corswain.