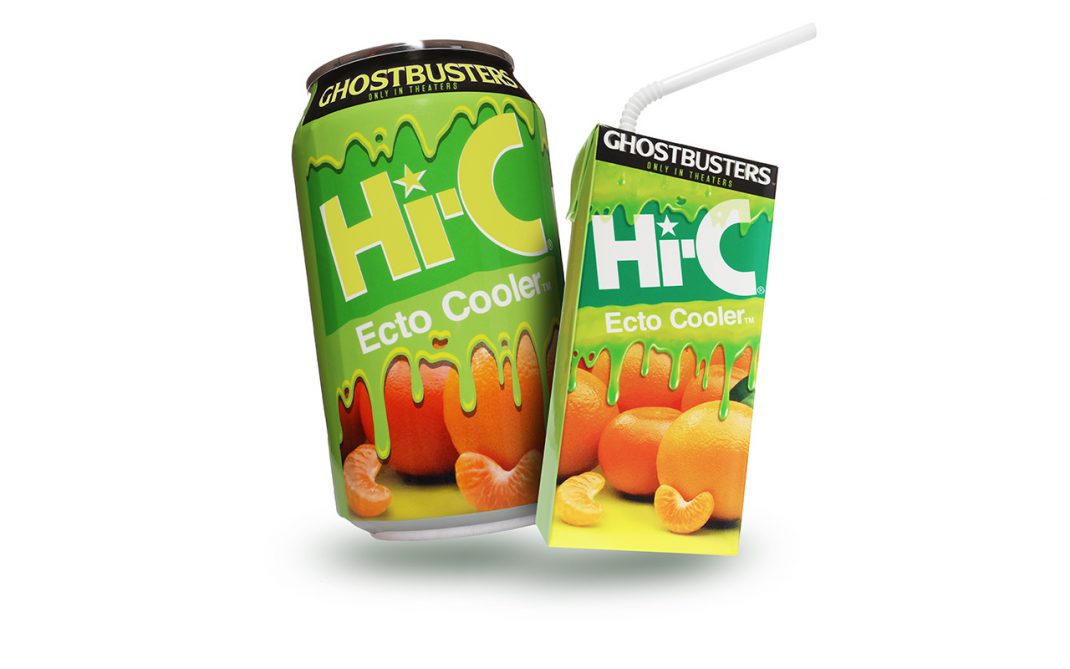 Hi-C Ecto Cooler is Back for A Limited Time

HOUSTON – Fans of the ghoulish green goodness of Hi-C Ecto Cooler have one more reason to celebrate the return of the Ghostbusters franchise to the silver screen. This summer, the juice drink of choice for those nostalgic for the ‘80s and ‘90s will officially return to store shelves for a limited time. Its resurgence comes after a 15-year hiatus, much to the delight of fans everywhere. Ghostbusters hits theaters on July 15, 2016.

“Hi-C Ecto Cooler fueled a pop culture phenomenon that is well remembered and beloved by fans to this day,” said Charles Torrey, Vice President, Minute Maid/Hi-C Brands, Coca-Cola North America. “Sony Pictures was extremely enthusiastic about bringing it back for this special occasion, and the timing of the upcoming Ghostbusters film made this the exact right time.”

Hi-C Ecto Cooler became a cultural mainstay in 1987 as a tie-in with the original Ghostbusters franchise. The drink’s immense popularity kept it around for more than a decade and kept people deliciously hydrated until it was discontinued in 2001.

Since then, popular online sites have cited Hi-C Ecto Cooler fondly in articles on ‘90s nostalgia, and have inspired vocal online fan groups. Those groups, along with some lobbying support from Sony Pictures, spurred The Coca-Cola Company to bring Hi-C Ecto Cooler back, just in time for the new Ghostbusters theatrical release this summer.

Fans who can’t wait to get their hands on Hi-C Ecto Cooler until May 30 can enter for a chance to win it before it is available for purchase. To enter and learn more about the Sweepstakes, fans can follow @Ectocooler on Twitter and Ecto Cooler on Facebook. Visit: http://bit.ly/HiCEctoCoolerSweeps to read official Hi-C Social Sweepstakes rules and entry details.

Hi-C Ecto Cooler will be sold in 10-packs of 6-ounce juice boxes and in 6- and 12-packs of 11.5-ounce aluminum cans. The cans are specially printed using thermal ink that turns an eerie shade of slime green when the product inside is cold.

Hi-C Ecto Cooler fans can follow the brand on social media at Facebook.com/ectocool and Twitter.com/EctoCooler or learn more at www.ecto.cool.

Ghostbusters makes its long-awaited return, rebooted with a cast of hilarious new characters. Thirty years after the beloved original franchise took the world by storm, director Paul Feig brings his fresh take to the supernatural comedy, joined by some of the funniest actors working today – Melissa McCarthy, Kristen Wiig, Kate McKinnon, Leslie Jones, and Chris Hemsworth. This summer, they’re here to save the world! The film is produced by Ivan Reitman and Amy Pascal, and written by Katie Dippold & Paul Feig, based on the 1984 film “Ghostbusters,” written by Dan Aykroyd and Harold Ramis and directed by Ivan Reitman. The film will be released in theaters nationwide on July 15, 2016.

About The Coca-Cola Company

The Coca-Cola Company (NYSE: KO) is the world’s largest beverage company, refreshing consumers with more than 500 sparkling and still brands and more than 3,800 beverage choices. Led by Coca-Cola, one of the world’s most valuable and recognizable brands, our company’s portfolio features 20 billion-dollar brands, 18 of which are available in reduced-, low- or no-calorie options. Our billion-dollar brands include Diet Coke, Coca-Cola Zero, Fanta, Sprite, Dasani, vitaminwater, Powerade, Minute Maid, Simply, Del Valle, Georgia and Gold Peak. Through the world’s largest beverage distribution system, we are the No. 1 provider of both sparkling and still beverages. More than 1.9 billion servings of our beverages are enjoyed by consumers in more than 200 countries each day. With an enduring commitment to building sustainable communities, our company is focused on initiatives that reduce our environmental footprint, create a safe, inclusive work environment for our associates, and enhance the economic development of the communities where we operate. Together with our bottling partners, we rank among the world’s top 10 private employers with more than 700,000 system associates. For more information, visit Coca-Cola Journey at www.coca-colacompany.com, follow us on Twitter at twitter.com/CocaColaCo, visit our blog, Coca-Cola Unbottled, atwww.coca-colablog.com or find us on LinkedIn at www.linkedin.com/company/the-coca-cola-company.