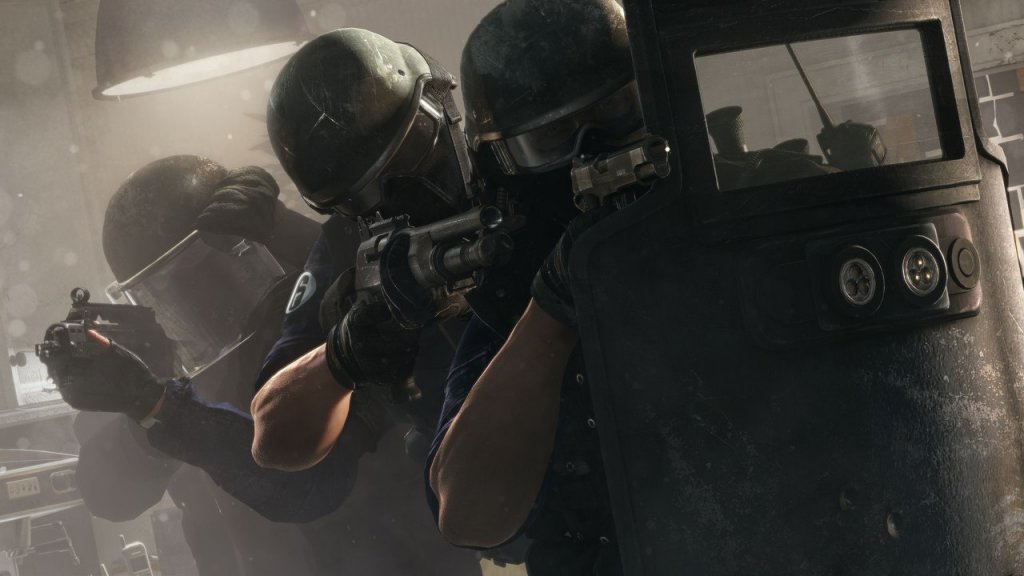 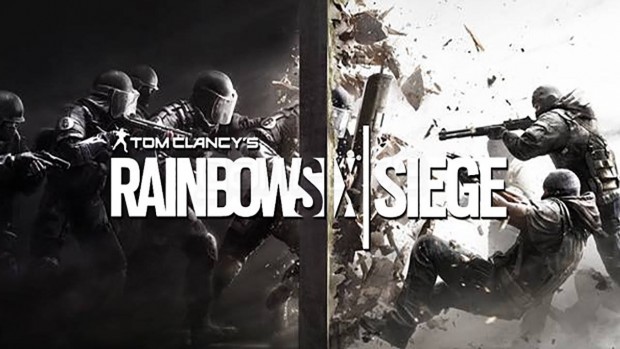 Anyone who knows me as a gamer knows there are two kinds of games that I am thoroughly addicted to: MMORPGs and first-person shooters. The funny thing is I’m not extremely great at either one, but I am always a solid team player willing to take a bullet/axe/arrow to cover my teammate’s six or to complete the mission. I’m seldom the guy who gets top place and I almost never talk in chat due to PTSD but I’m ALWAYS by your side which the “fit hits the shan”. If I’m a healer/medic you can be sure I will risk my arse to save yours.  My addiction to FPS is so deep that I even got my RL nickname “Ripper” from my fondness for sneaking up or ambushing an enemy and cutting them down with a blade.

So when a FPS comes along I am always quick to pick it up even though sometimes it sits on a shelf for a while tempting me until I get other reviews done.  Luckily in this case Tom Clancy’s Rainbow Six Siege was the review so I got a chance to dive in deep to one of the most anticipated FPS of the year. 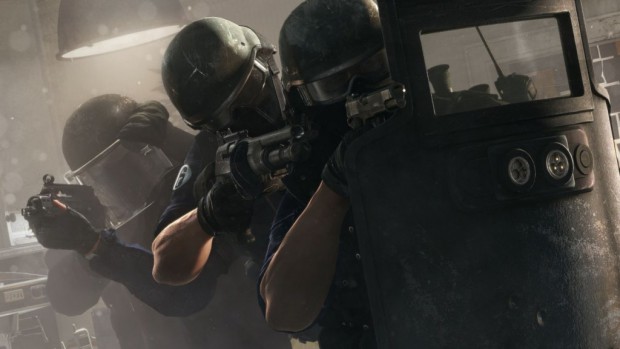 Description:
Rainbow Six is an elite team composed of members of the best Special Forces units from around the globe:
• The British SAS
• The American SWAT
• The French GIGN
• The German GSG9
• The Russian Spetsnaz
Trained to operate in tight formations in indoor environments, they are experts of close quarter combat, demolition, and coordinated assaults.

Hands On:
Admittedly, I am a big Tom Clancy fan, having read or listened to almost all of his books so when it comes time to play as his elite unit Rainbow Six I dive on the chance. The idea of a no-borders world terrorist defense team is more than appealing. If it doesn’t exist in secret already, it should. This could easily become a hot button debate but this is about a first-person shooter, so let’s just leave it at that. The storyline described in a quick cinematic is that there are a new group of terrorist called The White Masks and they have scared the world enough that Rainbow Six is being re-activated to deal with them and you are to recruit from any agency in the world without concern for borders or protocol. Just get the job done.

You start off as a recruit and through doing the tutorial missions and watching instructional videos you can earn enough points to unlock so of those world specialist to be on your play list. Each of the five agencies have two categories of specialist, attacker and defender, and each category has two specialists to choose from. One might be an expert in high caliber weapons for defense, another might be a breaching rocket expert for attacking. Each of the specialists have a unique style of attack or defense so you are sure to find one that suits you best. They also have cool nicknames like Pulse who is an expert in detecting enemy heartbeats close by to possibly determine which direction an attack is coming from. 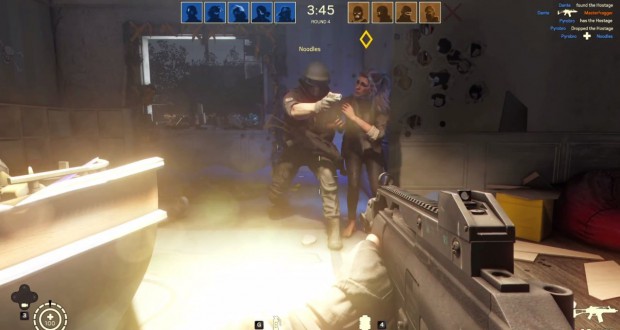 The name of the game is Rainbow Six Siege so the game is all about siege physics and gameplay, one team wants in to do something and the other wants to stop them. As a result the environment is one of the biggest factors in how this game is different from a lot of FPS games with most of it being able to be reinforced, barricaded and most importantly destroyed. Open doorless entry ways or windows can be boarded up with a weak defense that at least obscures line of sight and provides notice of a possible direction of breach. If the attacker doesn’t have a breaching device they also have to strike or hit the boarded up location a few times to breach. If an attacker has a breaching device they can blow holes in some walls and floors or completely destroy boarded up entrances quickly and with enough destructive power to cause cover by flying debris and possibly even an enemy kill. High caliber weapons can blow holes in walls as well as destroying furniture taking out cover in a hailstorm of bullets. There’s nothing quite like being a defender and having a desk your hiding behind disintegrate except maybe the feeling of watch a wall blow out and seeing an enemy right on the other side having put his back against that wall for cover.

That is really the fun of this game. In many ways it is a standard multiplayer FPS (no single player campaign) with many standard weapons but it is the destructive environment and the weapons for attacking and defending that make this game standout. In FPS we have a tendency to no look up, in this game that is almost like an invitation for the other team to blow a hole in the ceiling above you and rain death from above. While you are watching the doors it is a wall that blows in on you that you had put your back to. It is all close quarters which would be a little dull after a while were it not for the breaching and destruction. It is the “siege” and the different ways of performing it that really defines Rainbow Six Siege. 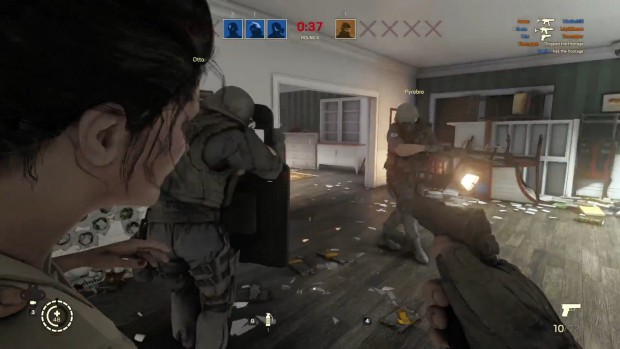 It is meant to be a multiplayer game but there are game modes that allow for some single player. There are 10 training missions that you can do on normal, hard, or realistic that teach you the different elements of the game but also provide interesting scenarios against AI. A lot of people like to skip training missions and jump right into online play and I saw a lot of people doing just that but you earn weapon and specialist unlock points by going through these missions and accomplishing objectives and that is a great way to give you a few specialist at hand when you jump into multiplayer mode as well as teaching you different techniques or enabling you to try out ideas.

The other mode is Terrorist Hunt in which you can put together a team or go Lone Wolf mode and the system picks a scenario and location while you pick from the three difficulties and your unlocked specialists. This mainly consists of you protecting a hostage while under siege by the White Masks. There are waves after waves of attackers that will come at you from every direction you can imagine and the environments can be as big of a challenge as the enemy attackers. For example one defense I was in the middle of an airplane. You might think that means above, below, and to the sides of your position will be safe and you just have to worry about the two directions. In some ways that actually makes it more difficult because seats are obstructing lines of view and all the attackers are either attacking you from in front of you or behind you. If you go up against the fuselage your hostage is a clear shot and the seats are in your way and you are still getting shot from two directions in a space small enough that if they breach simultaneously they will obstruct your field of view even more. These were some of the most frustrating missions and yet they are probably the best training for multiplayer, you really find the strengths and weaknesses of the environment. 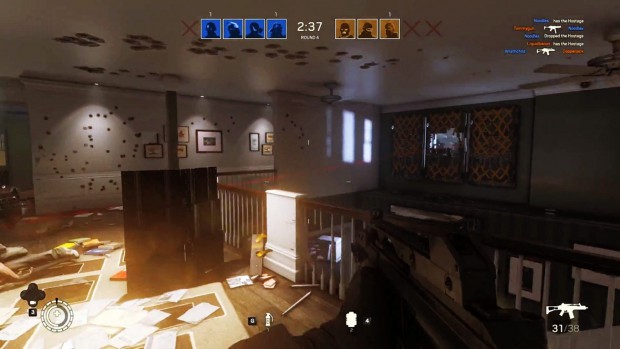 Last Shot:
Tom Clancy’s Rainbow Six Siege is a beautifully crafted multiplayer FPS that makes the environment a crucial part of the gameplay. This game is about a close quarters siege and as a result it polishes all the important physics that would be involved in such a situation. I like single player first-person shooters and in this game it seemed to primarily function as a preparation for the multiplayer instead of telling it’s own story. I wish it had a single player campaign worthy of Tom Clancy novels but it never claimed to be about anything but Rainbow Six performing in siege environment and that is where the game excells.