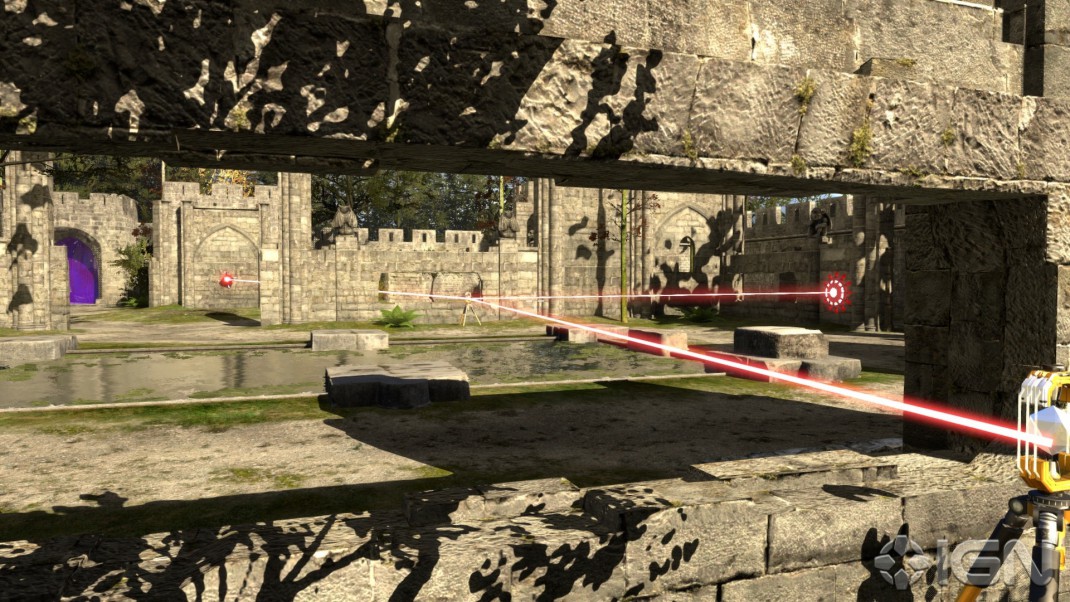 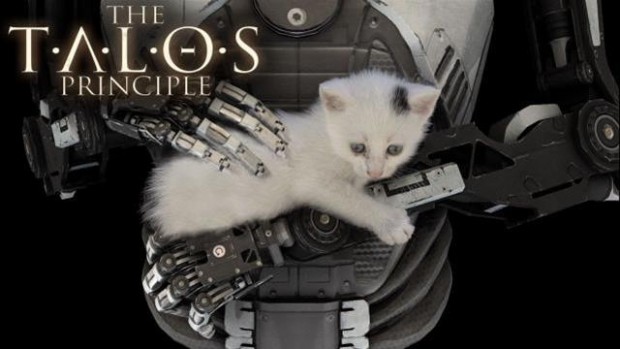 I think therefore I am.
-Descrates

“You will be required to do wrong no matter where you go. It is the basic condition of life, to be required to violate your own identity. At some time, every creature which lives must do so. It is the ultimate shadow, the defeat of creation; this is the curse at work, the curse that feeds on all life. Everywhere in the universe.”
― Philip K. Dick, Do Androids Dream of Electric Sheep?

Normally here at GamingShogun.com we don’t try to hit you with a philosophical idioms when starting off a review but The Talos Principle brings out the amateur philosopher in me. Up front it needs to be said, besides having studied the above works and authors, I have repeatedly watched I, Robot and one of my top five films of all time is Blade Runner. Surprisingly, both versions of BR I feel hold their own values and truths and I feel are superior to the work they are based off of “Do Androids Dream Of Electric Sheep?” (a sophomoric position but one I stand by). By these quotes and these admissions you may have guessed I couldn’t wait to dive into The Talos Principle. 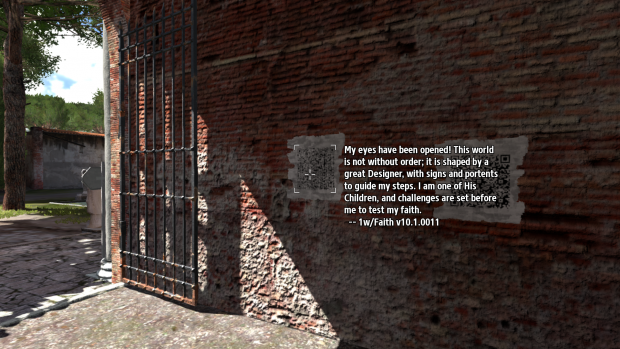 Hands On:
I’m skipping the Features and Description and diving right into the review because the quotes above work as the description and the features are fairly straight forward. The puzzles are spatial style for the most part, similar to a cross between Portal and Myst’s stunning visual landscapes that showcase the graphic abilities of the PS4. There are other puzzles that are “Tetris” style block / shape puzzles. The further you get into the game the more complex the puzzles and there are divergent paths of play which lead to different endings. If you want just a fun puzzling game the gameplay doesn’t require anything deeper than that to beat it. At it’s simplest The Talos Principle is a challenging puzzle game that has hours of entertainment and brain exercise. 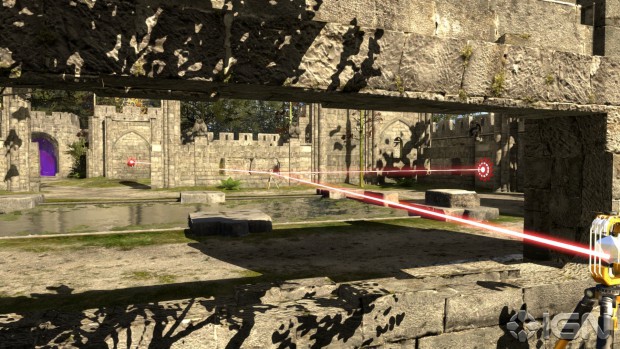 If you want to go deeper into the game, it delves into ancient philosophy and how it effects the present and the future of what we define as “life.” Ahead are some spoilers but they are given more as points of interest on a journey than to damage a player’s experience and reference for those who wish to understand a little better what the creation is going on in this game.

In the beginning, of the game and for purposes of the protagonist The Beginning, Elohim (ancient Hebrew for God) created His Garden for Man (or in this case Robot) then placed His Child into The Garden to test his worthiness to ascension. During these tests, Elohim has bestowed His Child with never-ending life so he may learn but should he fail the tests The Child and all of his descendants will know only Death.

It is hinted in the game through ancient scripture and parables that children of metal and fluid have been built and tested throughout all time and that to this point all have failed. Once being made of brass and quicksilver the metal children now look just like Sonny from I, Robot. If you haven’t seen I, Robot you will have a bit of a harder time grasping the story than someone who has seen it a few times. If you have seen and actually engaged in Blade Runner or read “Do Androids Dream of Electric Sheep?” you will be ahead of the game. If you ever studied the heavyweights of philosophy such as Descartes, Aristotle, Socrates, and Plato this will seem old hat. What you really need to think about is at what point does decision making become life and identity.  The game presents you with different takes on the arguments from different time periods, many of which are also the beautifully rendered background sections for the game.  For example it might look like Egyptian ruins when the parables are about the Sphinx.  There is no need to build a great rendering of the collapsing Roman aqueducts to discuss Roman philosophers or build spacial puzzles but it is a great addition.

At the center of The Gardens is a forbidden tower which Stephen King fans may immediately associate with The Dark Tower and you can tell that King had drawn upon some of the same ancient beliefs when he build his.  To me it reminds me a bit more of maybe the Tower Of Babel… but I may be saying too much. 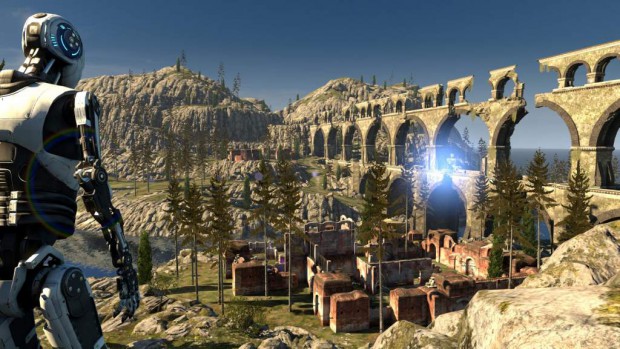 There is a solid backstory, where a robot needs to be tested for being actual life rather than simply programming and it is a puzzle in itself, the pieces scattered throughout the game for those who want a philosophical puzzle as well as brain teasers. The Philip K. Dick quote above is remarkably accurate toward one of the several possible solutions of the puzzle and seems to almost play out word for word on the screen but there is more than one possible ending just as there is no right answer to the philosophical debate, it wouldn’t be ancient if it had one answer. There is one ending at least with the kitten from the title art too in case you get an ending without it and think it was a bait and switch (it may be the only non robotic creature in the game).  The one problem I have is the backstory has a catalyst which seemed a bit far fetched with so many possible, tangible and terrifying close reasons for why we may want to have humans of metal, philosophy and possibly faith. 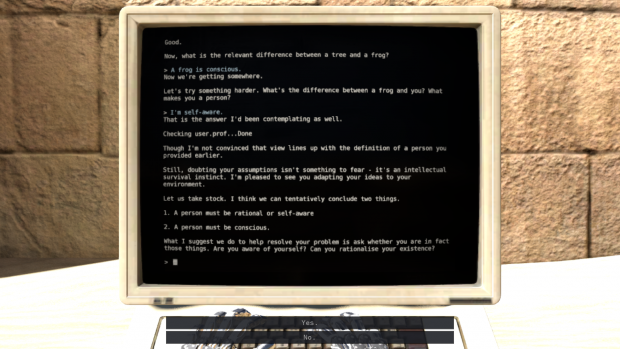 Final Thoughts:
The Talos Principle will have me thinking about it long after I put the final thoughts to this review. The Talos Principle works on many levels, being a fun and challenging puzzle game at its simplest and being an ancient and complex philosophical debate just below the surface that goes as deep as your mind decides to take it. It may even encourage players to look up and study the philosophies the game brings up, making them less machines and more active creatures in the exploration of life, identity and creation. In short more human.