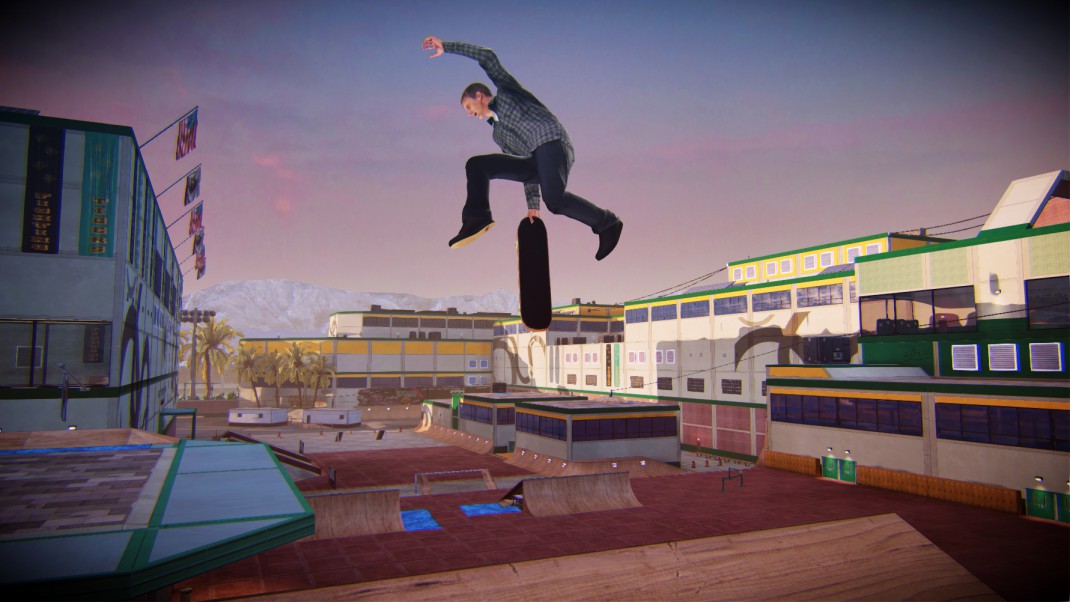 One of the very first games I owned for the PlayStation 2 was Tony Hawk’s Pro Skater 3 and, WOW, did I play the hell out of that game. Massive and fully interactive maps along with a fantastic and fun user interface made that game as addictive as could be. That being my last experience with a skateboard title, I was all ears when Tony Hawk’s Pro Skater 5 got announced earlier this year. Unfortunately, it just doesn’t live up to anything more than a slightly higher definition version of what could almost be a last-gen console game.

The games mechanics for THPS5 are just as you’d expect from a Tony Hawk skateboard game. Grinding, manuals, basic skating, ramps and what not – they’re all back in the same working format that you’ve come to know and love. The low gravity is also as it was from previous titles, making for some amazing tricks when hitting ramps, verts, and the like. This can also lead to some rather hilarious bugs when missing a trick at the wrong time, literally catapulting your rag-doll character across the map or soaring into the air minus their board.

Though THPS5 is what you’d come to believe a Tony Hawk title to be, it doesn’t feel like a brand new game. In fact, it feels like a step backwards for the title in almost every way. With a next-gen console release, I expected much more massive and in-depth maps, a higher variety of tricks and abilities, and much more customization options when creating a your own skater, and so on and so forth compared to what next-gen consoles have been visually able to pull off over the past few years since their initial release.

Instead, custom skaters do not start out with many custom options at all and unlocking them comes slowly and with minimal reward. Even then, unlocking a custom head or outfit during a skating session doesn’t actually show you what you’ve unlocked until you go to the custom skater window and scroll all the way to where the unlocked card is, flipping it to show what you actually received. Not only can this be a pain since there are a ton of unlockables, but it’s also not very rewarding when you take all that time just to find out you unlocked an outfit or an item that you could really care less about. Along with that, all custom skaters are based on original character templates (Tony Hawk, Chris Cole, David Gonzalez, etc) so even if you fully customize your character, it’s still the template wearing different outfits, faces, and the like. There’s no real option to play as a completely original skater.

The soundtrack, while fitting for a Tony Hawk title, can be rather repetitive. Why sports titles have not expanded their tracklist along with their expansion of options and gameplay is completely baffling to me. While understanding that licensing is always going to be an issue, a true fan of sports titles is going to be playing them for a year solid before the following year’s title releases and a small soundtrack (like MLB The Show 2015 or NHL 14) is going to become an annoyance after the first solid week of gameplay. Along with that, THPS5 doesn’t really give you the option to turn off specific songs and let me tell you, some of them are catchy while others are downright annoying. Being an independent artist myself and knowing the currently horrid state of the music industry, it would be nice to see more original music as well as more choices as far as soundtracks go. That would help a lot in keeping things lively and exciting. Instead, after only a few hours of gameplay, I was getting repeat tracks since starting a mission or a new skate session will start a new song from the beginning and there doesn’t seem to be any rhyme or reason as to the order of tracks being played. Speaking of missions, these are the only way to open up new levels in THPS5. While Free Skate can be an absolute blast, there’s really nothing that can be gained as far as game advancement and jumping into the missions is the main way of progression aside from acquiring points for character customization unlocks. While some missions can be fun (grinding distances and exploding heads are my personal favorites), they also become repetitive and more of a “collect these” and “return them here”, taking away from the whole point of skateboarding where you want to be doing tricks and attempting death-defying skateboard acrobatics. Another downside is that the missions are the same, level-to-level, simply with different names according to the theme of the map you’re on leading to a lot of repetitiveness, especially when you just want to free skate all the maps.

The whole interface of the game seems like it took a step back to the PlayStation 2 days, both graphically and texture wise. Doing awesome tricks does not feel as satisfying without the big blowup text or anything fancy happening other than the trick you did being high-lighted as a different color at the bottom of the screen. Along with that, there are company logos EVERYWHERE. It almost seems like THPS5 was created just to be a brand showcase cash grab and not necessarily a well-rounded follow-up to what has been some amazing skateboard games over the past years. The maps themselves look tiled together and done have that beautiful, clean look to them you’d expect from a next-gen console (I could be playing this on the PS2 and wouldn’t know the difference to be honest).

While Tony Hawk’s Pro Skater 5 is still fun to play just as you’d remember the previous titles to be, there’s really nothing new or exciting in it. Because of that, the game wears thin rather quickly as there isn’t much to really keep you playing in what is supposed to be a brand new, 5th title in the Tony Hawk’s Pro Skater series. Limited and unimaginative missions, small and sometimes basic maps, and graphical bugs that can be a pain – it’s sad to see that this feels more like “Tony Hawk Takes Your Money” than a brand new Pro Skater title. Maybe I expected too much but even a brand new player to the Pro Skater series will see 5 as a game that could have had potential but seemed more rushed out in its final product and lacking a lot of the basic polish you expect from a game released in 2015.