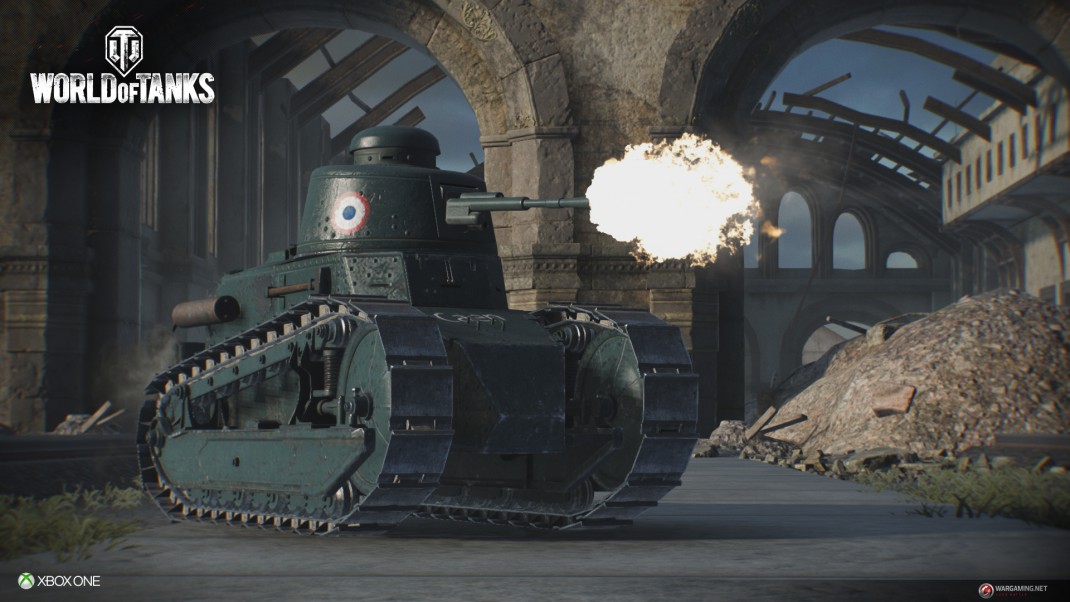 World of Tanks Xbox One Review 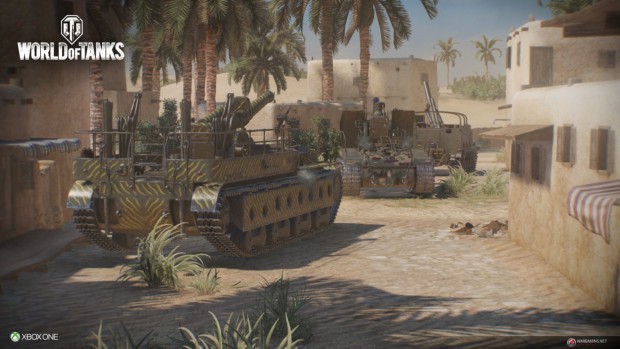 I fell in love with World of Tanks when it was just a wee fledgling of a game. Four years later and with three games running under the Wargaming.net flag the title that steams ahead the most is still the first one they let the public taste: World of Tanks. World Of Tanks has now launched live on Xbox One and, if you you liked it on the Xbox 360 or the PC platforms, then you are in for a grand treat when you get your controller in-hand and start slinging rounds downrange.

Hands On:
Please note that, while I usually list a game’s official features prior to diving into a hands-on, the list is HUGE! Simply way too much to put in front of the hands-on section. An abbreviated version of the list will appear at the end of this review.

The first thing you notice when you get onto the Xbox One version of World of Tanks is just how crisp the visual details are. Looking at the tanks in the garage, the details are exceptional. You can tell that they went through archival photos of the actual tanks and crafted every little detail – even down to the placement of an enemy helmet and defensive logs on the “Fury” tank.  This is a recurring theme in this incarnation of the game, everything is HD and rebuilt from the ground up and the hardware of the Xbox One is pushed hard enough that the game had crashing issue when it would launche – it just froze up with all the detail once you entered a match.  A reasonable amount of this detail will be later implemented in the PC and Xbox 360 version but the Xbox One is where this game will shine, even in the menus.

If you come straight from the PC version of the game, the menu system is a little daunting at first. If you came from the Xbox 360 version, then there are just a few things to get used to such as the Proving Grounds menu. The nice thing is that the Xbox One version of World of Tanks isn’t just a simple port – actually it is more the opposite as they made a bunch of changes and improvements from the ground up that they plan to implement on the 360 and PC.  Once you get past the initial menu navigation you get the pleasure of seeing the tanks you had already collected sitting there in your garage in all their new HD glory.  I purposely didn’t check the details of this new version so every update was a surprise.  I had expected to see three starter tanks but was jazzed to see my work on the Xbox 360 version reflected in my Xbox One garage selections.  I love World of Tanks and had taken quite a while to really appreciate it on the 360 so it was nice to see I didn’t have to start that process all over from scratch. 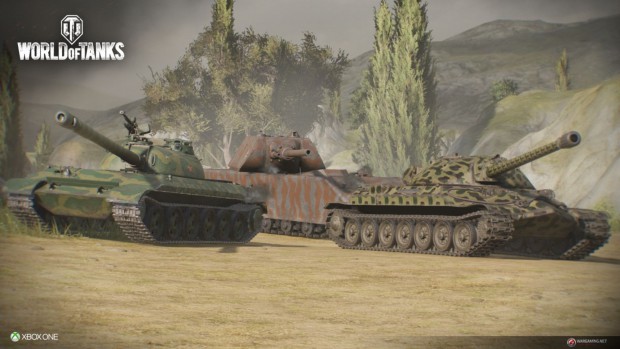 Another way Wargaming.net helped me to appreciate the detail was by giving me loaner access to a fully stocked garage account so that I could go through and notice all the details added to every single tank.  In the past the premium tanks were all about performance and little about how they looked.  I can say that I found tanks which I really, really want now that are not necessarily because of beefy performance but just the beautiful, historically-accurate detail of the vehicle.  I want the “Ripper” tank so bad I can’t even express it enough.  It performs nicely but the tank that has the same nickname as I do also has one of the most amazing paint jobs that reflect the actual vehicle’s paint designs that left me stunned and wanting it.

If you have not played the game on the Xbox 360 I highly recommend the Training and Proving Grounds.  These not only provide a bit of starter capitol but they also help you get used to using the controller which is extremely different from the mouse and keyboard, especially when it comes to manual aiming and zoomed shots. A helpful hint on this is to do a lock on target then hit the zoom button so that your turret is oriented and you can make fine calculations. If you have spent some time playing it on the 360 you should be able to jump right in, though the Proving Grounds is a nice warm-up if it has been a while.  Playing against the AI also gives you a chance to take in all the new details in the map. 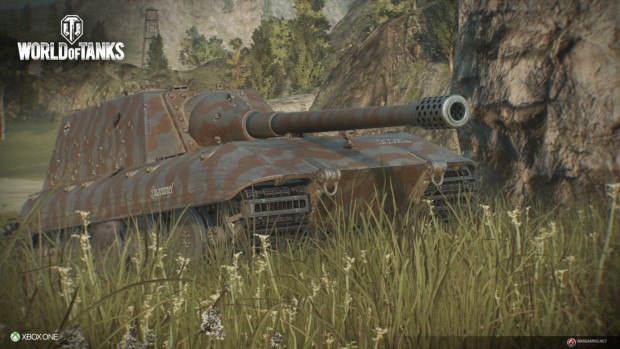 The details in the map are so well done and so dramatic that I went into one map that I had played well over 100 times on the other systems and I didn’t recognize it at all.  I thought at first it was an entirely new map since I hadn’t looked at which one was loading.  Then I noticed building locations and attack points and realized which map it was.  Birds could be heard singing off to one side causing my cats to look that way, fires looked realistic, building had natural looking aging and when damaged natural looking destruction.  I was marveling at it all as I drove through a field of high grass at the detail as all of a sudden a murder of crows took flight in front of me and past the screen.  I thought I was safe behind a building when all of a sudden a mortar shell struck nearby causing a crater and ground damage that my tank actually bumped on and persisted through the battle.  When it rained there was the rain drops on the camera view which shows up in games a lot now but the shine on the armor and the way the water ran off it was spots on physics.  I began to hope for rain missions just to see the detailed slosh of puddles and the way the rain ran off of everything.  Night battles look like they are truly lit by moonlight or taking place at twilight.  Even though all the mechanics were the same from the Xbox 360, the new details and physics improvements on the Xbox One left me stunned. 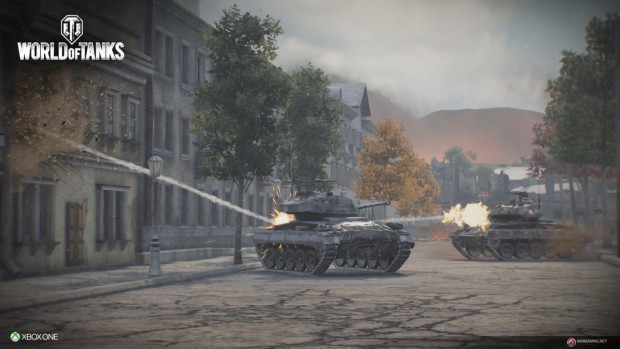 Probably one of the most shocking things is that World of Tanks is still a free-to-play game that can still be completely free-to-win – though with their HD beauty I think the value of the premium tanks have gone up.  When I had access to whichever tanks I wanted to test out on the press account I found myself going toward the ones I thought looked cool as much as the ones that were highest regard for performance.  Taking the Ripper out or the Freedom and doing some damage running around in a very detailed or special painted tank was so much fun I didn’t want it to end.  As I am writing this I’m itching to get back to the game.

Last Shot:
I was already a fan of the game, but World of Tanks on the Xbox One is superior to other systems and most tank games on the market now. If you wonder whether or not I am right, log on and give it a try. It doesn’t cost anything until you get addicted enough to start investing in it which I have been for some time. Then you can just think of how much money you have spent on other games that have come and gone over the last four years while this one is still going strong. I can’t wait until World of Warplanes and World of Warships make their console debuts, until then I need to get back to the Ripper while I still have access.

Features:
All Platforms:
Welcome to the first title with cross-platform play between Xbox 360 and Xbox One!
-One account sign in: Freedom to play on any platform – no progress will be lost if you go back and forth between platforms
-All existing Xbox Live accounts will seamlessly work on Xbox 360 and Xbox One
-Voice chat between platforms via Vivox integration
-Achievements transfer between platforms
-Tank Tree Progression Indicator
-Marks of Excellence Medals (no tank art, yet!). Similar to Mastery badges: use player damage + assist damage instead of experience earned
-The Proving Grounds game mode is here! Use any class or tier in your Garage and take on appropriately tiered AI opponents.
-New Main Menu as the first screen before the garage (Multiplayer, Platoon, Team Training, Proving Grounds
-New Achievements

Xbox One:
-All assets from tanks to buildings have been recreated from the ground up to be in High Definition (That’s 350 vehicles and over 1,000 map assets!)
-Exclusive Xbox One Garage: The Garage camera on Xbox One lets you get really close to the tanks for added detail on HD tanks
-You can now view your Service Records from the Post Battle Results Screen
-Twitch Streaming available from your Options Menu
-Access and view the Leaderboards from the Xbox One Dashboard
-View your Achievements and Challenges from Options Menu
-New Game Help system from Options Menu
-Web portal stats available in Snap View
-New timed Challenges that award concept art
-8X the texture resolution of Xbox 360 tanks
-Up to 50,000 polygons per tank
-Maps: Volumetric lighting and fog FX
-HBAO – Horizon Based Ambient Occlusion for more detailed lighting and shadowing
-Physically Based Rendering
-3D vistas for every environment that really ground you in the world
-Higher resolution trees and vastly improved culturals at a far draw distance
-Flow maps for cloud, wind, and cultural movements.
-Improved effects – the Xbox One can handle a higher particle count with greater resolution
-Enhanced explosion effects
-Enhanced battle damage effects to tanks
-Volumetric smoke and explosions
-The sound for World of Tanks on Xbox One has been fully revamped
-Tank engine sounds have been recorded live at a tank yard in the Midwest, cannon fire and explosions amplified to further immerse the player in the battle
-These audio enhancements are not exclusive and will also be added to the Xbox 360 version
-Tutorial missions and tutorial videos now found in “Proving Grounds” mode (by selecting the “Training” option / icon in the carousel)
-Fire FX have been updated
-Tread in water FX have been updated