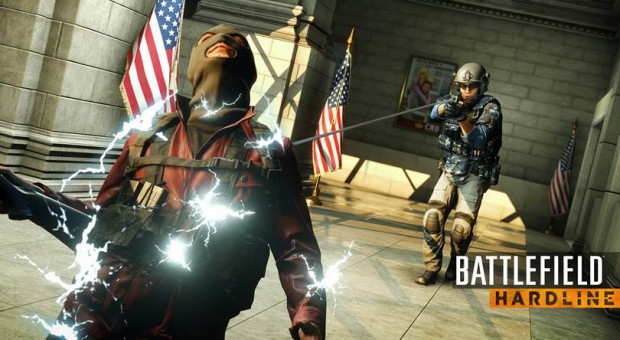 March 19, 2015 — Last night saw the first crews compete in Battlefield™ Hardline: Live(#BFHardlineLive), a competition giving players the chance to lead their crew in a high adrenaline, high stakes experience that could see them win £10,000. PlayStation Access had a preview of the experience and a video of them fulfilling their criminal fantasies has just been released:

Players wanting to win a place to lead their crew in Battlefield Hardline: Live can still enter at www.battlefield.com/hardline/live where an ongoing leaderboard of crews that have taken part will be listed. Entry is open until 23:59 this coming Sunday 22nd March.

Those that win the opportunity to take part in Battlefield Hardline: Liveagainst other crews will lead their chosen crew in to a murky world where deceit and destruction are all in a day’s work. Can crews get in, get the goods, then get out without being caught to pull off the perfect crime?

Theatre company differencEngine are hosting Battlefield Hardline: Live at a secret Central London location for eight days until Wednesday 25th March 2015. It is a one-hour controlled yet immersive experience with the winning crew leader claiming the £10,000 bounty but then facing a dilemma – keep it all or share with their crew?

Dan Sheridan (@EA_ActionMan), UK Social & Community Marketing Manager, said: “We hope our fans in the UK enjoy this real-world competition inspired by Battlefield Hardline. If I had some advice for crews taking part, I’d say focus on playing the objective (PTO), play as a team and define a winning strategy!”

For full information and Terms and Conditions for Battlefield Hardline: Livevisit http://www.battlefield.com/hardline/live .