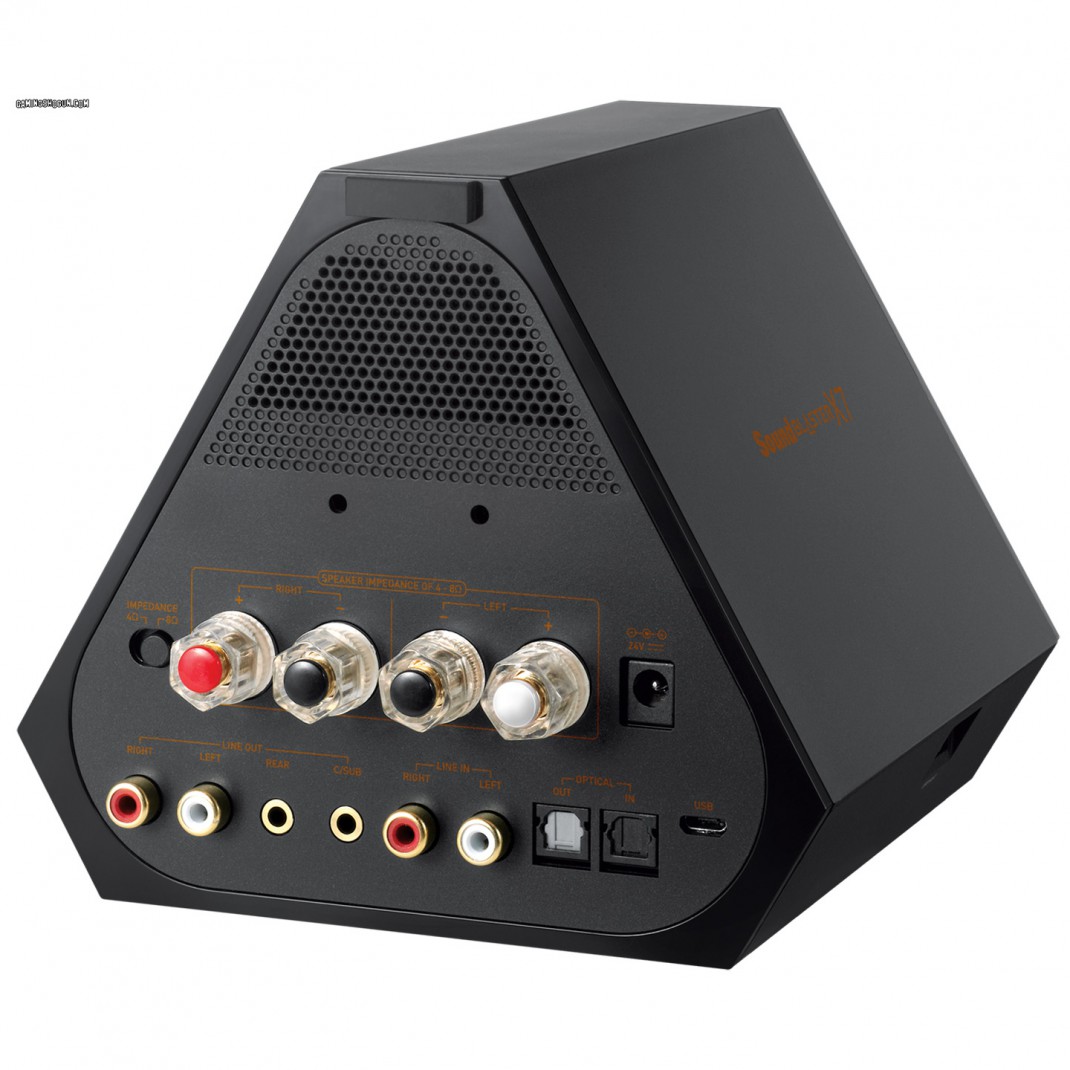 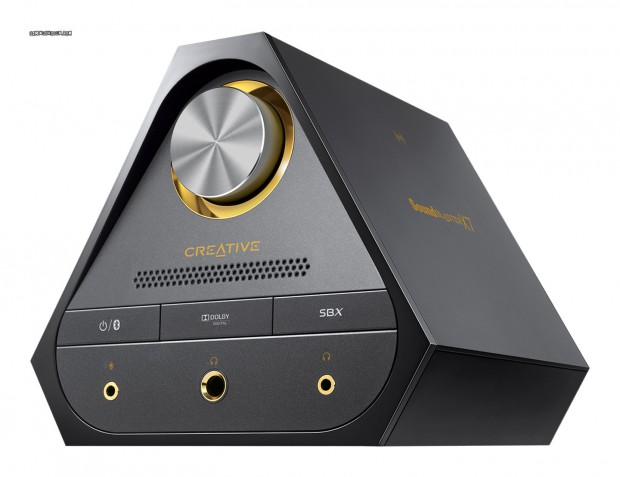 To say that the Sound Blaster X7 is Creative Labs’ flagship external audio solution is a bit of an understatement. Creative Labs has managed to fit a 127dB Digital-to-Analog Converter (DAC) as well as the company’s multi-core,  SB-Axx1 Digital Signal Processor (DSP) within its strange, prismatic form factor. Speaking to its design, the Sound Blaster X7 actually reminds me of some high-end audio device I might have expected to see in the re-booted Battlestar Galactica TV series, but I digress… And, I am a Geek, so say we all!

Creative Labs has gone above and beyond in making sure that there are plenty of input and output ports on the Sound Blaster X7. Along the front of the device, you will find both large and small headphone ports as well as a microphone port. Also on the front side of the X7 resides a volume control knob, power/Bluetooth button, Dolby Digital, and SBX buttons. The front side of the X7 also houses an internal microphone – very handy for making Skype calls. The back-facing side of the Sound Blaster X7 goes even further with port selection, with not only Micro-USB and Digital audio ports but, also, a selection of line in and outs. For those of you wondering just what kind of speaker systems the X7 will interface with, you can connect up to a 5.1 channel surround sound system to it (it will not support 7.1 channels or above).

If wired connections are just “not your thing” or, perhaps, you simply don’t like desktop clutter, then you will be happy to note that the Sound Blaster X7 supports connections of up to two Bluetooth devices and one NFC enabled device. I should note that I was unable to test out the NFC connection as my iPhone 6 still doesn’t have this ability (really, Apple?). Speaking of Apple, however, I have to wonder why Creative Labs didn’t build in support for Apple’s AirPlay technology to go with the rest of its wireless capabilities. That seems like it would be a huge boon to those gamers using Apple TV as their primary source of TV-based content. Then again, this does raise the point of who the Sound Blaster X7 is really designed for, but more on that later. I also would have hoped that the Sound Blaster X7 would accept an HDMI input and support the decoding of Blu-ray soundtracks that use audio codecs such as Dolby TrueHD. 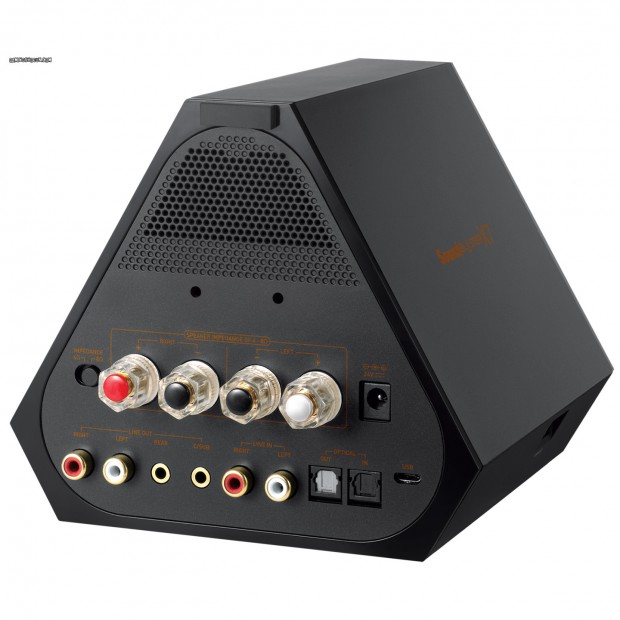 The included software suite allows you to tweak the sound coming from the Sound Blaster X7 to your liking. Back are Creative Labs favorites like CrystalVoice, Crystalizer, and Scout Mode all do a great job of enhancing your PC gaming audio. The Crystalizer has always impressed me with how it handled music and Scout Mode is a great way to boost important in-game noises like enemy footsteps.

For those of you interested in hooking your headphones up to the Sound Blaster X7, the device comes with an attachable headphone rest. It is a nice touch that merges overall aesthetics with function.  Additionally, the internal 600Ω headphone amplifier is powerful enough to let you listen to your audio with TWO pairs of headphones at the same time – perfect for sharing a movie with a special friend if noise is a factor or simply accommodating our future, four-eared alien overlords. Either way, it’s a pretty cool experience. Keep in mind that you will not want to amplify the audio going to a cheap pair of headphones – in fact, most headphones below true studio-grade will practically explode if you do. Just kidding on the exploding part, but you could damage their little drivers.

Unfortunately, the choice of speakers you use with the X7 will greatly determine your level of satisfaction. More to this point, plugging in a set of cheap quality, 2.1 channel speakers that I had laying around yielded sub-par results and, if that’s all you have, then I would not recommend you shell out your hard-earned cash for the Sound Blaster X7. Again, the argument could be made that if you are the type of person who has the cash to spend on the Sound Blaster X7, you probably have the cash to spend on a quality speaker system or studio-grade headphones. Thankfully, I am fortunate enough to have purchased a pair of Sennheiser’s PC 350 Special Edition headphones after having reviewed them a couple of years ago. Enjoying the Sound Blaster X7 while using them is a whole world difference of an experience. High quality audio files were beautiful to behold and my PC gaming has never sounded quite as good. 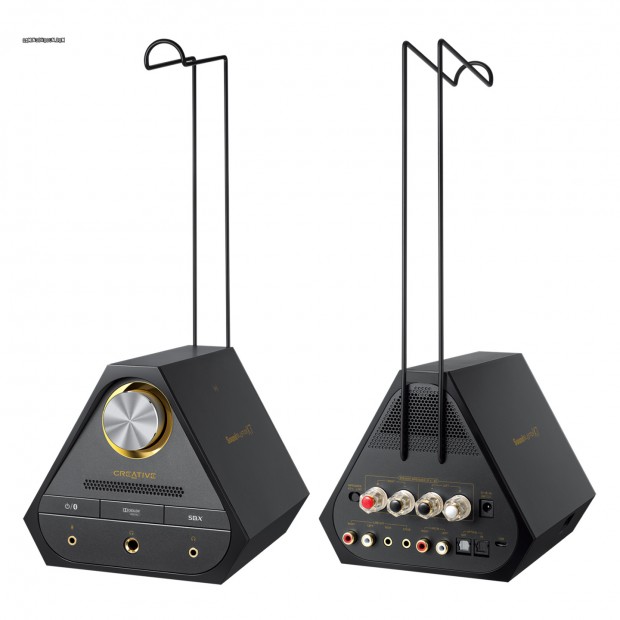 Overall, the Creative Labs Sound Blaster X7 is a remarkable audio device with a whole lot of features and capabilities. At roughly $400 dollars, however, you will need to seriously crave awesome sound quality and possess, or plan to buy, a high-end speaker system or set of headphones to get your money’s worth. If this describes your situation – you are in for an audio treat! If not, you won’t be disappointed with one of Creative Labs’ more cost effective products like the internal Sound Blaster Z sound card. At $150 dollars, The Sound Blaster Z is a great audio solution for the budget-minded gamer.

**Update – We forgot to mention the fact that the Sound Blaster X7 features a panel on its underside that, when removed, allows access to the modular amplifier chips. I am no audiophile, so I wouldn’t know where to get new ones at but, apparently, you can replace these with your own amplifier chips for more customized sound.