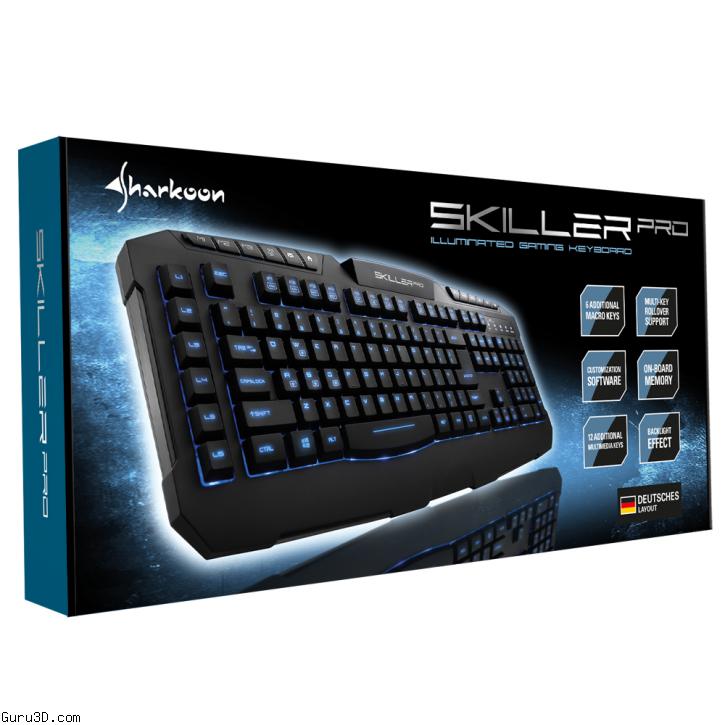 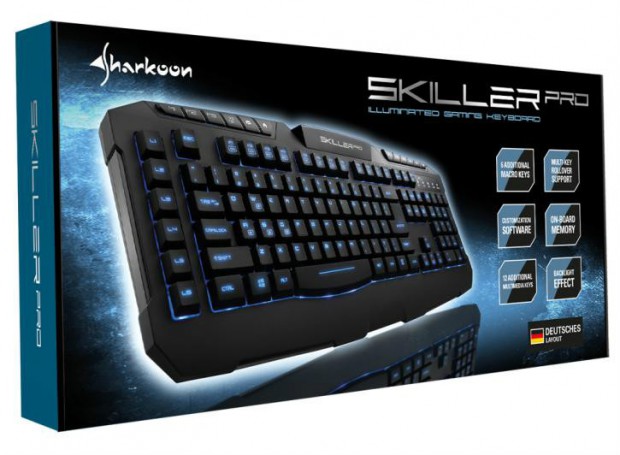 Over the course of my various occupations and hobbies, the computer always seems to end up taking center stage. As a teacher, gamer, writer, and reviewer I end up spending most of my time typing away on a keyboard, which causes me to be mighty particular to how my keyboards feels. This always leads to a combination of both excitement and trepidation whenever I receive a new keyboard in the mail. The newest keyboard to find a spot on my desk to see if it can survive my weekly computer regiment is the Skiller Pro Keyboard by Sharkoon.

Let’s get right into the main bit of the keyboard first. The Skiller Pro is a wired USB illuminated rubber dome keyboard that comes with a lot more features then I was expecting. The Skiller Pro measures 480 x 190 x 32 mm and weighs just 888 grams total, including cable. The cable itself is braided, which is a great touch, and is roughly 1.5 meters long. The illumination on the keyboard is a soothing blue, and the software allows for 10 different levels of brightness, including a breathing option.

The features of the Sharkoon Skiller Pro is a pretty full list, especially considering the price point which I will get to later. The keyboard is set up in the standard 3-block layout, with 9 multimedia, 6 macro, and 3 profile keys added in. The Skiller Pro also supports multi-key rollover, which is fantastic for gaming. The software included allows for more customization, including customization for specific programs like Photoshop, supports up to 3 different profiles, and supports programs such as creating macros, mouse functions, delay times, and internet functions. The Skiller Pro also supports Windows XP and higher.

The Sharkoon Skiller Pro has a lot of functions and features that fits nicely into both my gaming and career needs for computer work. I do miss the feel of a mechanical keyboard, I just don’t get the same satisfying crunch when I type on a rubber dome keyboard. That is not to say that typing on the Sharkoon Skiller Pro was a horrifying experience, it isn’t. The Skiller Pro was one of the best typing and gaming experiences I had with a rubber dome keyboard in a long time. 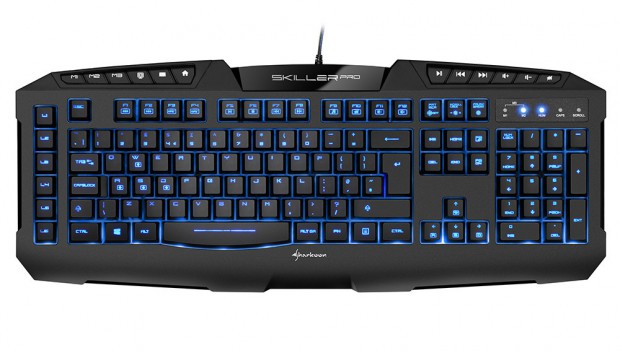 During my week of testing the Skiller Pro, I put it through my typical gaming regiment of Team Fortress 2, but added in some Book of Unwritten Tales 2 and Day Z, as well as countless hours of typing on it while creating curriculum for a school. Taking out my personal preference for the mechanical keyboard, the Skiller Pro did everything I needed it to do and did it well. I was extremely pleased with the performance of the Skiller Pro, especially for the price.

I’ve mentioned price twice before, so let’s talk about it. The Sharkoon Skiller Pro will run you about $30 US, or roughly 20-25 Euros if you are on the other side of the pond. For me, that is the Skiller Pro’s biggest selling point. You get all those features, and an illuminated keyboard for only $30. Price is always one of those subjective items when one does a review. For some, price does not matter due to their amount of disposable income, for others price is one of the biggest determining factors in a purchase. For $30 US, I truly think you will have a hard time finding a better keyboard on the market with both the amount of features and offers illumination.