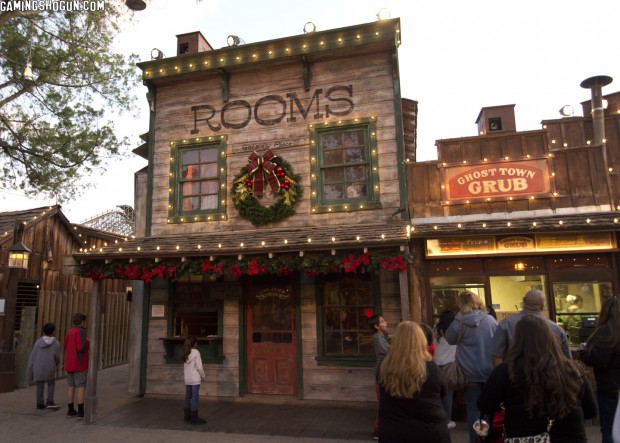 BUENA PARK, CA – The countdown to the New Year is on at Knott’s Merry Farm! With special fireworks, live entertainment, and extended hours, plus Knott’s signature rides and attractions, Knott’s New Year’s Eve celebration is the place for you and your family to ring in 2015.

Special one-night-only entertainment serves up family fun for a variety of ages and interests, including a family friendly comedian, salsa dancing and more! Count down the New Year with festive music, party hats, noisemakers, friends and family. Knott’s Sky Cabin, towering over 200 ft. in the air, will dramatically rise to the top of the “K” tower as special lighting effects help countdown the final moments of 2014. When the cabin reaches the top at the stroke of midnight both the “K” tower and skies above Knott’s will be ablaze with colorful fireworks!

There’s live entertainment everywhere you turn.  Adding to the line-up of can’t miss performers are:

·         Krazy Kirk & The Hillbillies!  From the deep country hills of Anaheim, these boys will have toes tappin’ hands clappin’ and guts bustin’ during the best darn musical comedy show ever performed in the historic Bird Cage Theatre.

·         Salsa Dancing with DJ JC invites you to show off your dance moves at Fiesta Plaza and groove to the beat of this spicy music scene that’s Hot, Hot, Hot! Snoopy will also make a special cameo and show off his paw-tastic dance moves.

A New Year’s Eve celebration is not complete without a delicious meal, and Knott’s has just what you need. The New Year’s Eve buffet in Spurs Restaurant will be served from 4pm-9pm; prices are $26.99+tax for adults and $14.99+ tax for kids (3-11).

This New Year’s Eve, round out a full day of family fun on the Farm with Knott’s Merry Farm’s festive lineup of entertainment, delectable foods and holiday shopping! Guests won’t want to miss:

·         Merry Christmas, Snoopy! in this exciting new show filled with whimsy and spectacular skating, Snoopy enjoys all of the best parts of the season, including trimming the Christmas tree, awaiting Santa’s arrival, and attending the festive Christmas Ball!

·         When the sun sets on the Farm, the buildings and paths in Ghost Town’s Main Street will be filled with snow and glow! Thousands of sparking lights will dance to the beat of familiar holiday music while snow gently falls in this spectacular one-of-a-kind moment each night.

·         The Ghost Town and Calico Railroad will once again invite guests to celebrate Christmas on Engine 41.  Climb aboard a vintage railcar and meet an ever-changing group of Ghost Town residents eager to share their Christmas plans.

·         Over in Camp Snoopy, Charlie Brown, Linus and Lucy invite you to dance, sing and join in on the holiday fun in the live show, Lucy’s Wish List in the Camp Snoopy Theatre.

·         In the intimate setting of Ghost Town’s historic Bird Cage Theatre, catch a live performance of Charles Dickens’ A Christmas Carol or O. Henry’s A Gift of the Magi.

·         Relax and unwind in Knott’s Christmas Crafts Village, as Ghost Town transforms into a shopping wonderland filled with dozens of local artisans selling their unique gifts. Can’t-miss highlights of the Village include powerful chainsaw sculpting and elegant glass blowing demonstrations.

Knott’s New Year’s Eve Celebration is included with regular daytime admission.  Park hours on New Year’s Eve are 10am to 1am. A 2015 Knott’s Season Pass is a great way to visit on New Year’s Eve.  2015 passes offer a year of family fun and includes one free visit in 2014, including the New Year’s event.

And for a limited time, Season Passes can be purchased online starting at $79.50 or six easy installment payments of just $13.25 until January 4, 2015. To purchase Season Passes or tickets, or for more information about Knott’s Berry Farm, visit www.knotts.com or download the Knott’s mobile app for your smartphone today.  And join the conversation using #KnottsNYE.