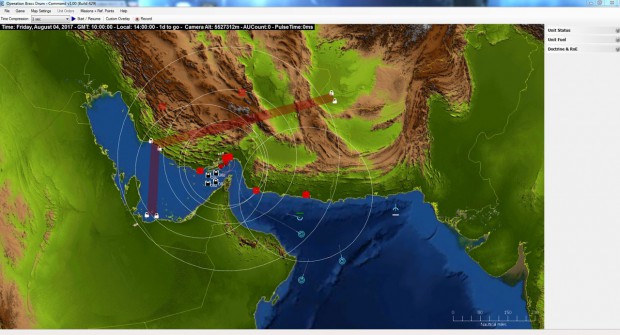 Arlington, VT, December 17, 2014 — In the spirit of the coming Christmas holidays, the restless developers at WarfareSims have unleashed an Arc-Light strike with a new huge free update for Command: Modern Air/Naval Operations, continuing their support to this deep military simulation. With this update, the players have been given some great tools to keep them occupied during the winter! Command: Modern Air/Naval Operations was already lauded for its technical accuracy, attention to detail, gameplay flexibility and its powerful integrated editor and version 1.06 really takes it to the next level.

The new update brings two great boons to airwar enthusiasts, and an a-bomb for modders and scenario creators.

Surge and Quick-Turnaround air operations allow players to faithfully recreate the frantic tempo of historical operations like the Six-Day War or the first nights of Desert Storm (or apply the same sortie rates on their own hypothetical conflicts), while also having to deal with the inevitable punishing wear and tear on both crews and airframes that this relentless pace enforces. The faithful depiction of the critical choice between sustained or “surge” rates is a first for any unclassified strategy/wargaming title on the market and pushes Command into the arena of hardcore flight simulators.

At the same time, customizable unit-level proficiency settings allow scenario creators to model both hard-seasoned eagles and green nuggets on the same side, even down to the same squadron. The effects of unit proficiency are also even more amplified than before, and veteran or ace operators now have decisive advantages over their less experienced counterparts. So now not only do you have to manage and favorably arrange the hardware, but the people too. How do you know your crews are entering battle with a vastly more proficient enemy? Maybe your briefing will tell you…. or maybe you’ll find out the hard way.

The third, and perhaps the most far-reaching improvement is the integration of the popular Lua scripting language right into the scenario editor, allowing unprecedented (indeed, undreamed of) levels of editing power and flexibility! Amongst other things, the use of Lua scripting allows players to write their own mission scripts, swap units between missions, place new units on either specific or random locations, set a wide range of unit properties, change the Doctrine/RoE settings during the course of the scenario as response to events happening (or not), and much more.

Of course there is a lot more to this update, including interface, AI & mechanics improvements and gameplay additions. The list here is so long, that the document containing the full list of changes is over 53(!) pages long.

All combined, these updates takes some of the features of Command that players love the most – such as attention to realism, vast amount of detail and the freedom to set up scenarios as you wish – and took them to the next level. All of this means that version 1.06 marks another key point in the continues improvement of Command: Modern Air/Naval Operations.

Check the full list of changes by reading the pdf file online.

Get more information on Command: Modern Air/Naval Operations from its official product page.