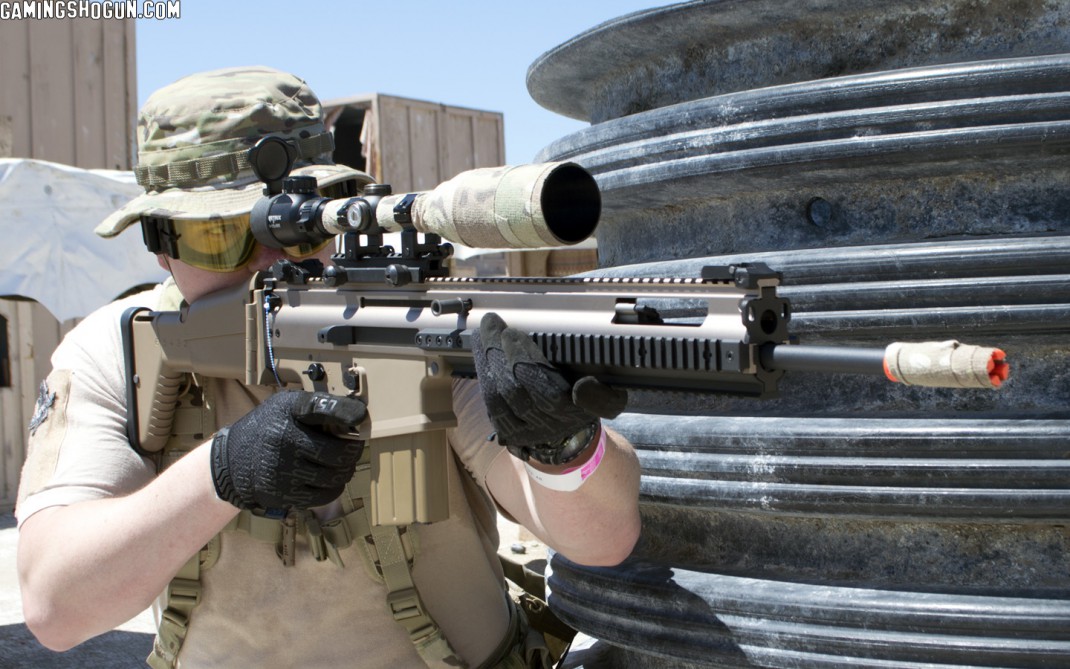 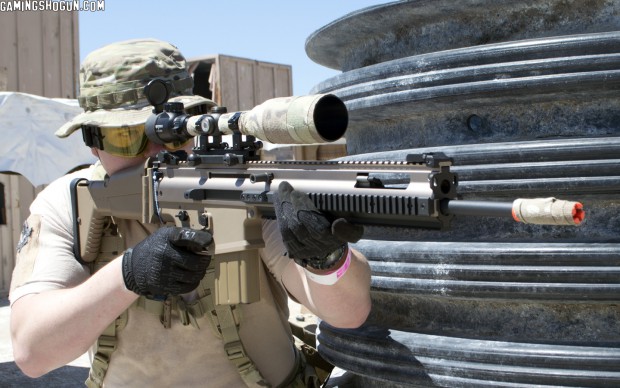 Recently, I got the chance to check out the WE Tech FN SCAR-H SSR airsoft rifle. This is the airsoft rifle version of the real steel FN SCAR-H Mk 17 Sniper Support Rifle (SSR), chambered in 7.62mm. It is a rifle, in the real world, designed to give operators long-range precision as well as close up fighting capabilities – something that is often times hard to do in one package. The longest of the WE Tech SCAR series, the SCAR-H SSR measures just over 1,000mm in length and, amazingly, only weighs about 7 lbs. This is, in large part, due to its lightweight, yet very durable aluminum upper receiver and polymer lower receiver. For you lefties out there, note that this rifle’s magazine release and fire selector are ambidextrous. Additionally, the rifle features a very long, monolithic upper rail for optics as well as side and lower rails for whatever accessories you prefer. Internally, WE Tech added a good array of pre-upgraded parts inside the gearbox, such as a polycarb piston, ported piston head, steel gearset, and 8mm bushings. 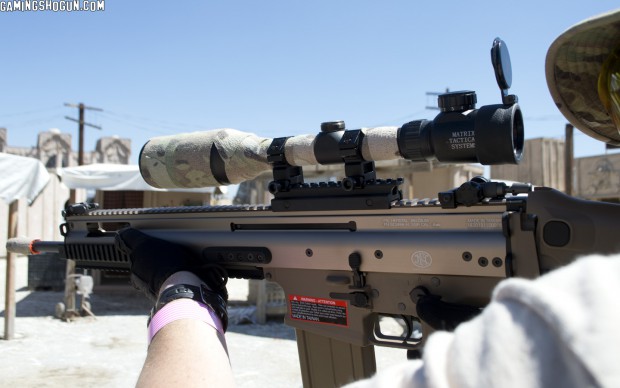 Using .25g BBs, the airsoft rifle was rated at 377 FPS using our in-house chronograph. On the field, I was consistently impressed with the WE Tech SCAR-H SSR’s lightweight design. I have used a lot of airsoft guns in my time as a player and this was, by far, the best rifle combination of size and weight I have fielded. The trigger response is super-snappy thanks to it pre-compressing the spring the first time you pull the trigger. In fact, I would actually recommend that you fire the rifle once in semi-auto with no magazine in it for the first shot. Then, the spring will be compressed and subsequent rounds will fire as normal – but, I digress. After you are finished playing, you will hear a very strange sound as you switch the airsoft rifle back to the safe fire mode. This is the super-cool feature of an automatically decompressing spring! You no longer have to fire a single shot at the end of every game to decompress your spring simply switching the gun to safe will work even better. This is an awesome feature and something I wish more airsoft guns would implement. 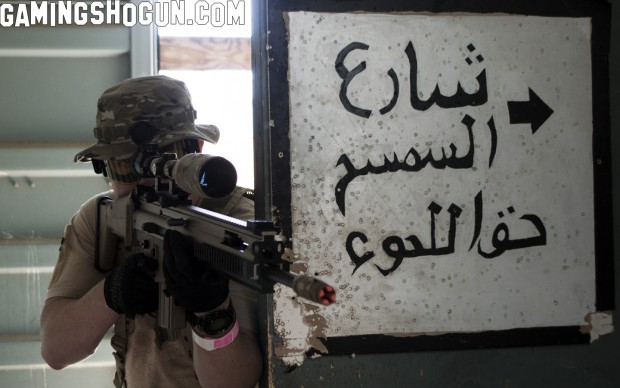 Something I wish WE Tech included in the box was a black, metal flash hider as the rifle only comes with the bright orange plastic one. It would be nice to have the option to change it out for milsim events. As a reminder, GamingShogun.com recommends that you keep your orange flash hiders on your airsoft guns anytime they are not in designated, milsim events on monitored, private property – safety first, folks! In the box, you will find a 330-round high capacity magazine – it is worth noting that you can ONLY use WE Tech SCAR-H magazines in this airsoft rifle. Additionally, at the time of this writing, WE Tech does NOT make mid-capacity magazines for this rifle yet. This is a big problem should the games you play only allow mid-caps. If you want to use this in a milsim game, you would want to speak to the game host in order to setup some alternative rules (maybe you only get 1 magazine for the game, etc).

Overall, the WE Tech FN SCAR-H SSR airsoft rifle is one of the nicest airsoft weapons I have had the chance to field. It easily gives the VFC-built version a run for its money in the externals department, and takes the lead when it comes to internal quality and features. The WE Tech FN SCAR-H SSR retails for $429.99 at AirSplat.com and we would like to thank them for letting us use one from their inventory in this review. 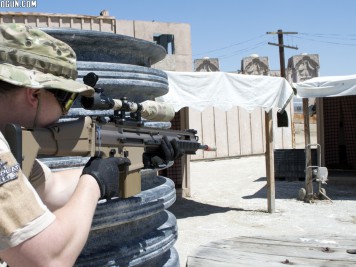 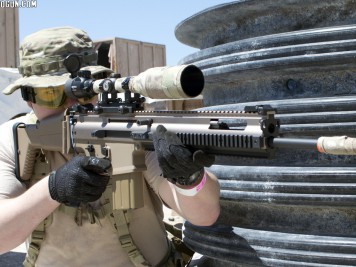 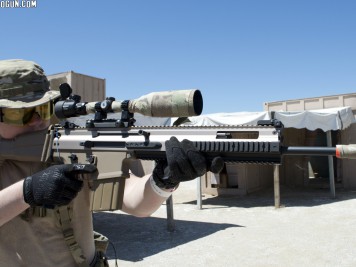 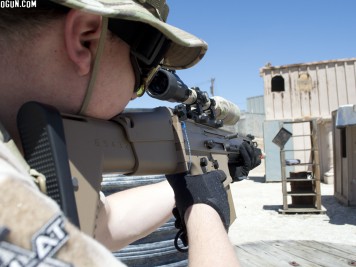 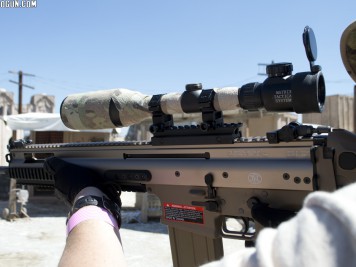 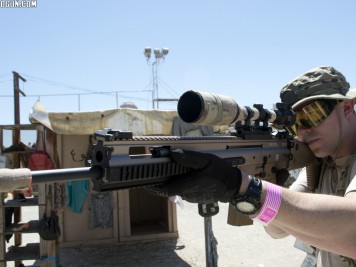 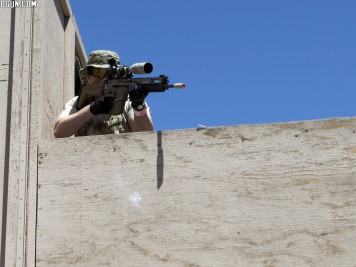 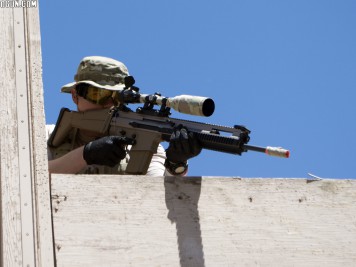 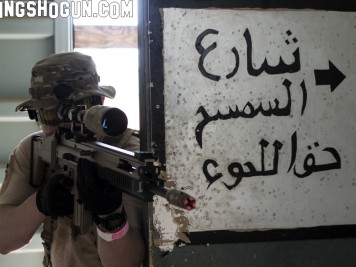 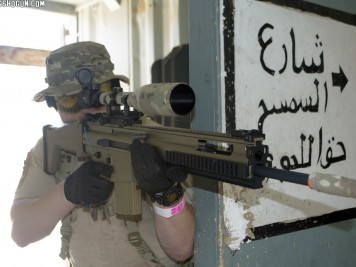