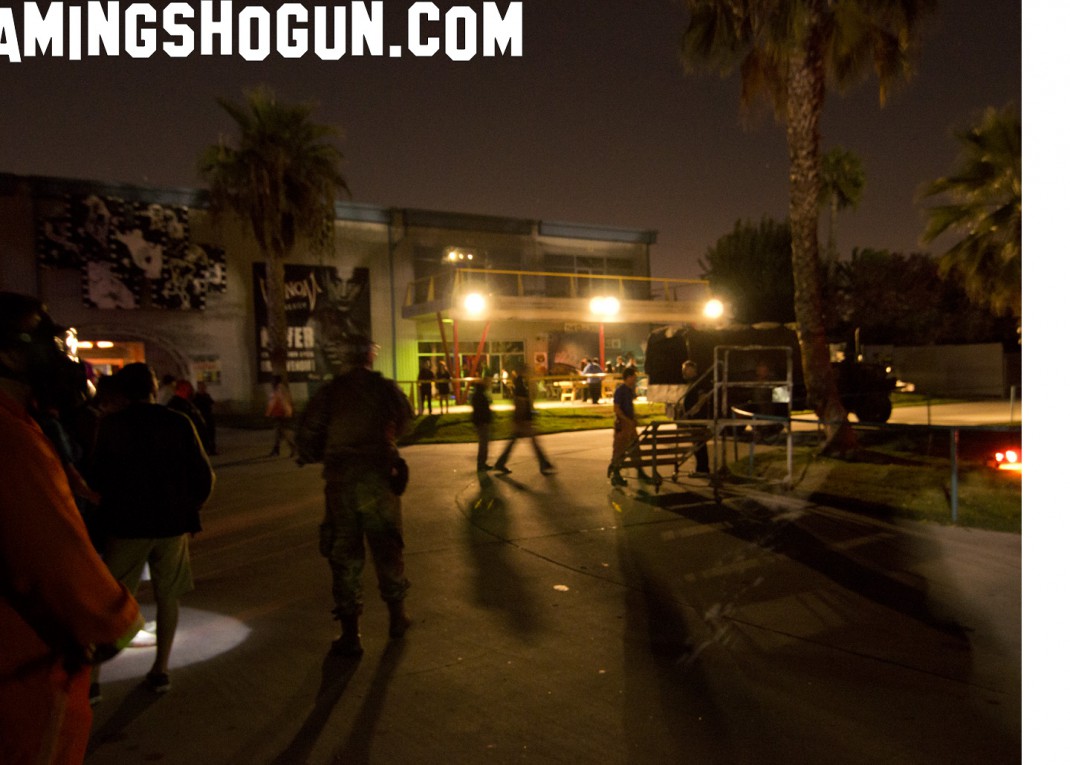 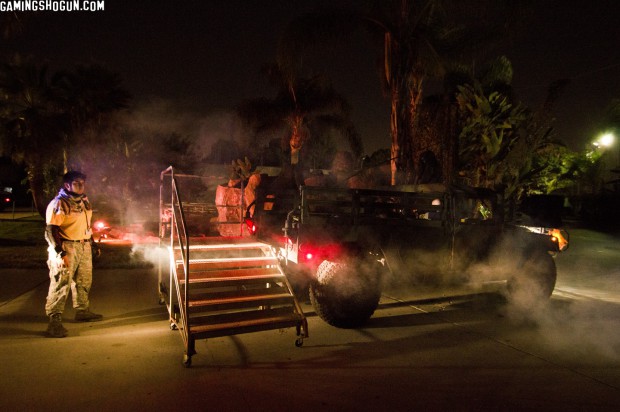 Haunted Hollywood Sports (see our 2013 review) is the haunted attraction put on by paintball and airsoft field, Hollywood Sports Park, in Bellflower, CA. A week prior to the start of their haunt, Haunted Hollywood Sports had us, and a lot of other media outlets, out for their 2014 media preview night. The evening started with a busy media check-in process followed by waiting in line for our military transports which were going to take us out to a Forward Operating Base (FOB) where we would be able to kill zombies, eat, and party. They had both open-back Humvee trucks as well as a covered “deuce-and-a-half” transport that were shuttling media back and forth.

After a brief on-stage introduction by the park’s owner, Gio Degidio, they began sending off media groups into one of two attractions open for our checking out: Venom, a traditional haunted house, and the Zombie Killhouse, where guests are given safety goggles, a protective vest, and a BB-firing rifle to go through a variety of structures, clearing them of the undead. Haunted Hollywood Sports has been putting these zombie killhouses on for four years now, and they are very good at it thanks to a lot of trial and error, as well as their inherent experience with both paintball and airsoft action sports.

Our first stop of the evening was Venom, one of their walk-through haunted house mazes. Venom takes guests through a system of catacombs where all manner of strange things await. We were attacked by spiders, spoken at by severed heads, and I even took a step forward in my fight against claustrophobia by going through a very long “claustrophobia hallway”. Despite the fact that the maze seemed a bit undermanned, which I am unsure if it was just because it was a special event, I was pleased with the maze and its scares.

The second attraction we got to check out was the one I was most excited for – the Zombie Killhouse. Getting led into the quarantine zone by soldiers, we were taken into a large military tent and briefed on our objective and how to properly handle the airsoft rifles and safety gear we would be using. After some cool things that happened in the tent (which I will not spoil for you future guests), we headed into the park’s daytime “Combat Center” which had been transformed into a winding maze of obstacles. Being an airsoft player at this park in daytime conditions, it was really cool to see the transformation and it took me some time to get my bearings as to where I was in the facility. Led by a squad leader and rear guard, we moved into buildings, clearing them one by one of zombies. Speaking of which, the zombie characters were protected by padded uniforms and full face zombie airsoft masks, and it was extremely satisfying to shoot them at close range. The visceral nature of shooting them and hearing your BB ricochet off their masks, followed by their playing dead was awesome. The whole thing was lit in black light, so visibility was much better than previous years.

Guests are provided a G36G style airsoft rifle (basically an extended G36) and one midcap magazine, which hold about 120 BBs, for the attraction. Being an airsoft player that is used to conserving her ammunition, I had no problems with running dry – and I don’t recall my squad mates running empty either. The biggest issue with the airsoft rifles provided was their long muzzle length, which does not lend itself to close quarters battle (CQB) environments. I accidentally tagged a couple of the monsters with my muzzle. I had hoped they would provide M4 style airsoft rifles with shorter barrels – but, I digress.

Also seen during the course of the evening were several entertainment acts – from a magician to a street performer who would allow viewers to staple money to various parts of his anatomy. The performer got to keep the money, of course, and this act seemed to be a crowd-pleaser.

Overall, the Zombie Killhouse was my favorite attraction of the two. It was exhilarating and, if you are only used to walk-through haunted houses, will be a very cool change of pace for you. Who knows – you may even pick up the game of airsoft after running the Zombie Killhouse. If you do not wish to go through the park’s killhouses, you will also be pleased with their more traditional, walk-though haunted houses. There is a little something for everyone. 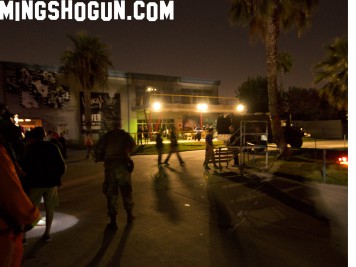 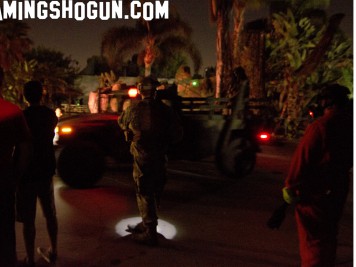 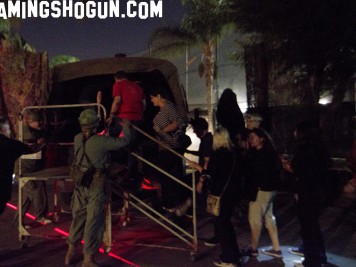 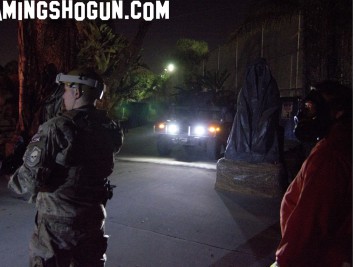 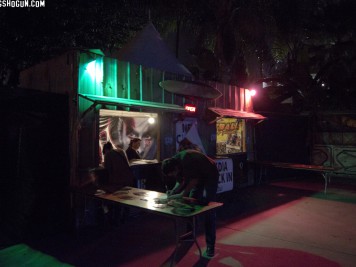 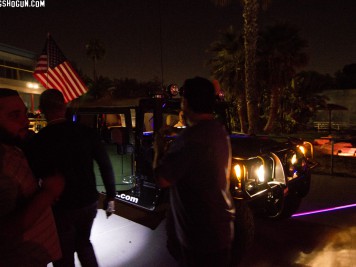 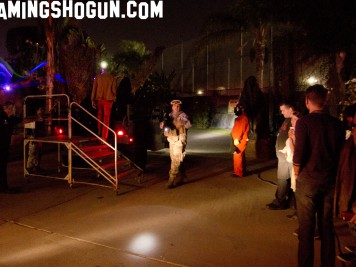 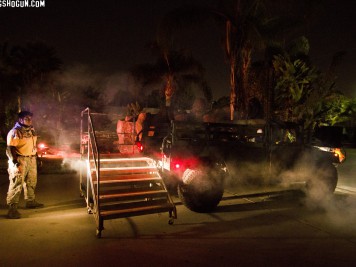 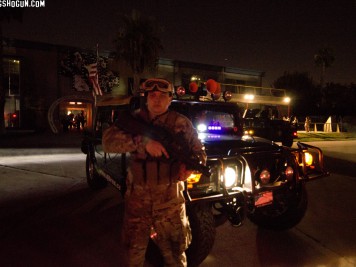 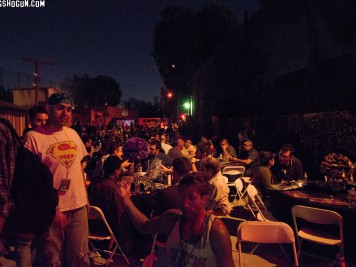 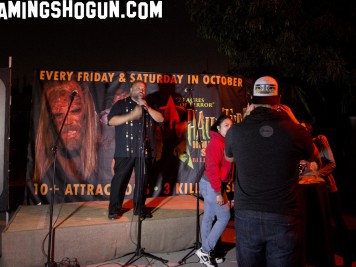 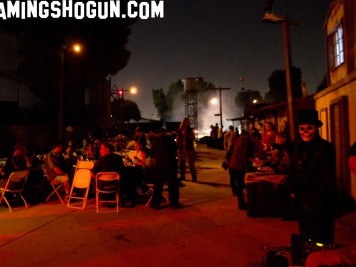 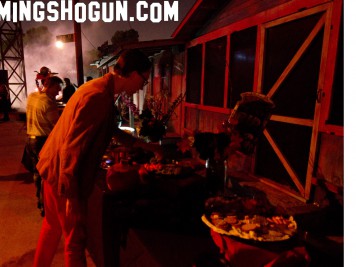 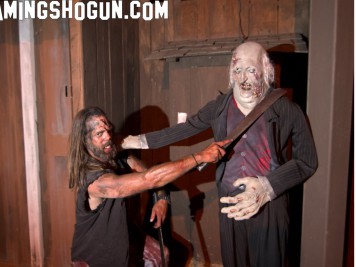 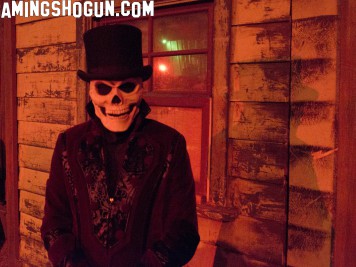