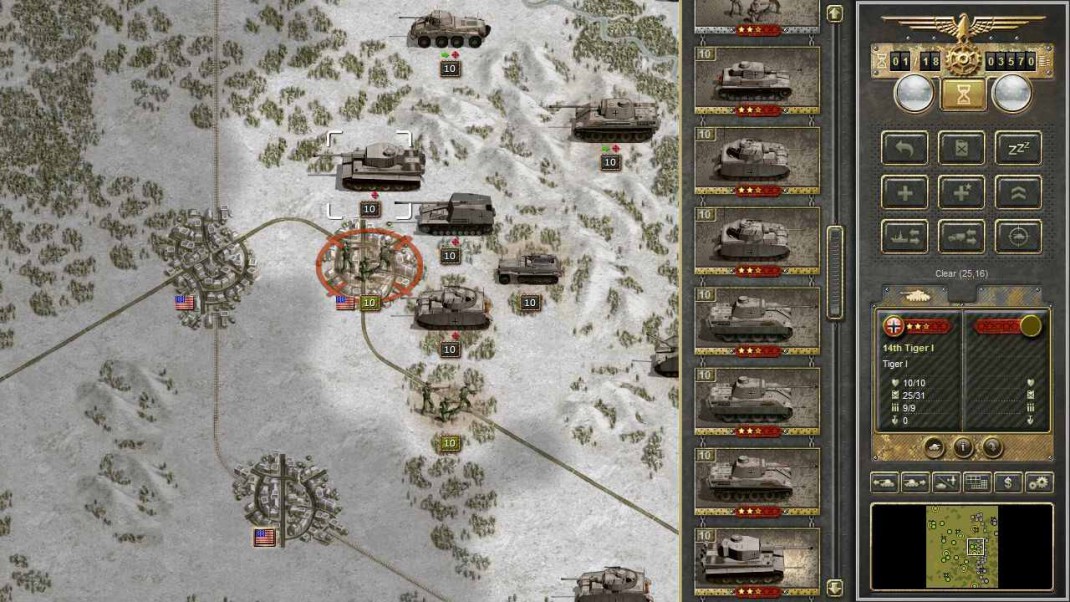 The folks behind Panzer Corps had their work cut out for them. Their goal: To recreate the intense strategy gameplay found in SSI’s 1994 hit, Panzer General. The game is available in both the original Panzer Corps and a multitude of DLC packs and expansions. Some expansions, like Allied Corps, add not only new campaigns to the game but also new units for you to command.

Panzer Corps’ gameplay does a great job of mimicking Panzer General’s. They say that imitation is the sincerest form of flattery and, in this case, that definitely seems to be the case. It is clear the developers at The Lordz Game Studios had a lot of love and respect for Panzer General. The game starts off with a minimal mission briefing / objective list then (usually) lets players place their units on various hex spaces on the map. After that, the player takes turns with the AI opponent moving their units – attacking and defending, etc. If you are new to the turn-based wargame genre, you can select to turn of the fog-of-war option as well as the need to resupply your units as they expend fuel and ammunition.

For multiplayer gamers out there – you will be pleased to know that this game mode does exist in Panzer Corps – albeit by way of “Play By Email” and Hotseat game types. Both multiplayer modes work well – and I can’t say anything negative about them as they are tried and true methods of strategy wargaming that have been around for a long time. You can also play single missions against AI units or through the various campaign modes that the game has to offer.

Matrix Games, the publisher of Panzer Corps, was good enough to send us over review samples of the entire Panzer Corps collection – which includes both the African and European theaters of battle. If you purchase the basic Panzer Corps experience on Steam, it will run you $19.99 – but, if you purchase the Panzer Corps Collection on Steam, it will cost $79.99. While that is definitely not cheap, you are getting a virtual ton of content for it – including the Allied Corps expansion which allows you to play as the allies. Also in the big collection is the Afrika Korps expansion which takes players to Northern Africa. Panzer Corps was first released back in 2010, so at this point if you are interested in taking the plunge, I highly suggest just buying the whole collection.

Panzer Corps’ biggest weakness is its UI – which is not very self explanatory and will take some getting used to. In some ways, I hoped they would take the gameplay of past games and merge it with more modern design choices – making it easier for young gamers to pick up. But, it is functional and, once you learn it, you won’t have trouble navigating the various buttons and icons. The basic flow of battle is easy to understand – you move a unit, then attack an enemy within its range. Of course, some units will be more successful than others in fighting certain types of enemy units, so the game has a built in battle odds calculator that you can reference prior to firing a shot. It is not 100% accurate but it gives you a general idea of how your units will fare.

Also, if you are a fan of history, World War II, or battle strategy in general you will have a lot of fun trying to take various strategies in the historic battles found in the game’s huge campaign.

Overall, Panzer Corps and its large collection of DLC packs and expansions is a must-buy for turn-based wargame fans and those wanting to flex their strategy muscles.