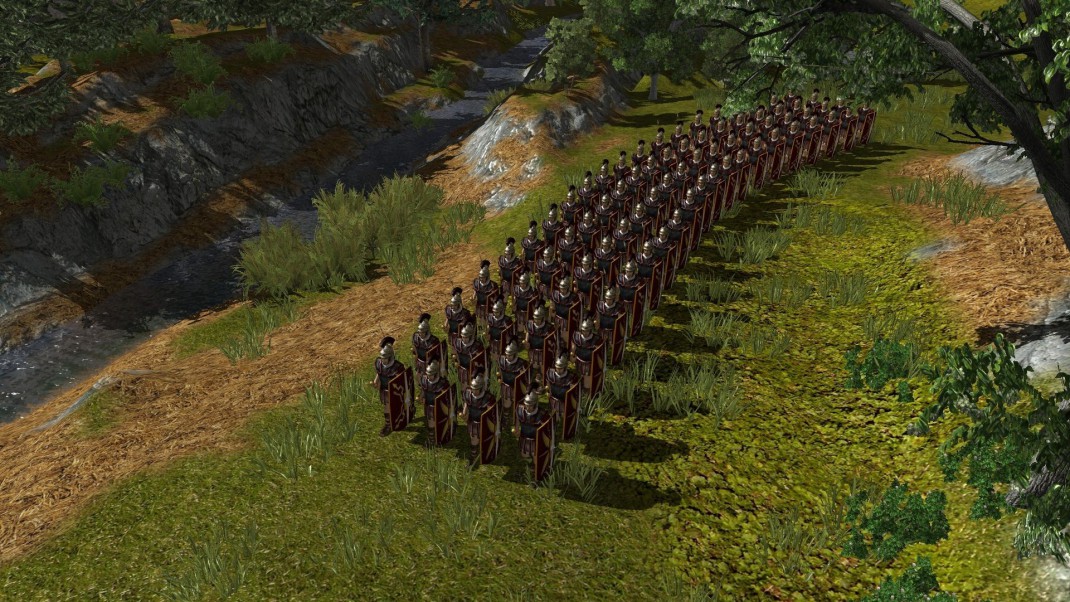 Longbow Games has released its newest real time strategy game, Hegemony Rome: The Rise of Caesar. Hegemony Rome, like its name suggests, follows the path of Gaius Julius Caesar and his rise to power, beginning with the Gallic Wars in 58 BCE. While the game play was very solid, especially for someone who does not do rts games very well, it was my background and degrees in history that kind of ruined Hegemony Rome for me. For instance, Rome did not use a hegemony style of government during the Gallic Wars, which is when the game begins. The title is, therefore, misleading but I guess “Republic Rome” just didn’t have the same ring to it.

Hegemony Rome begins in 58 BCE, at the beginning of the Gallic Wars. Caesar had heard of a migration of the Gallic Tribe, the Helvetii, across the northern parts of Gaul, and used this movement to further his political career and to help reduce the massive debt that he had built in his road to proconcul. Caesar hurries to Geneva, with a single legion at his command, and burns down the bridge over the Rhone, to stall talks with the Helvetii emissary. When Caesar finally meets with the Helvetii emissary, Caesar refuses safe passage of the Helvetii tribe and warns them that force will be used if they tried to pass into Roman territory.

The Helvetii then form an alliance with another neigbhoring tribe, the Sequani, and begin to move through Sequani territory across the Alps. Caesar leaves his troops in the hands of his second, Titus Labienus, and then moves to Cisalpine Gaul to recruit three more full legions of troops. Unfortunately, in order to return with these legions, Caesar himself had to trespass into Sequani territory, causing many skirmishes along the way.

This is just what happens in the first chapter of the game, and it is all historically accurate. While I may have issues with the title not being accurate, the rest of the game has been almost perfect in terms of historical story telling, down to the map and individuals involved. The first chapter ends with the Battle of Bibracte, where Caesar faced off against 92,000 Helvatii, according to his own researchers. The other campaigns in Hegemony Rome, follows the rest of Caesar’s book Commentarii de Bello Gallico, which was written by Caesar himself to retell the events of the Gallic Wars. I loved that the story was very historically accurate and was told in an engrossing way, but could see an issue with how the objectives were lined up for certain players. For instance, being told to move your troops to Bibracte doesn’t help if you have no idea where Bibracte is, since the map uses the “fog of war” technique of unlocking certain sections of map. There is no way point system or arrows that show you where things are if you haven’t uncovered it yet. So, study your ancient maps of Gaul before playing this game, kids.

Game play wise, Hegemony Rome falls on the side of being easy to learn, but deep enough for the hardcore players to enjoy. I was able to identify troops, leaders, and environments very easy. What really saved me during the game, was the ability to pause game play by pressing the space bar and deciding how I wanted to approach a battle. This gave me the breathing room that I needed in most cases, to really plan out my next move and defeat my enemies.

One great feature that made life in Hegemony Rome easy was how the map system worked in regards to tracking legions across great distances and zooming into certain areas. By using the middle mouse wheel, you are able to zoom in and out of the world, to either see a section close up to micro manage your battles, or to see Gaul as a whole and watch icons march across the land.

The rest of the game was standard rts and strategy game material. You have options to gather resources to build forts, farms, and towns. You have to watch your supply lines as you travel across Gaul, to make sure your Legions are properly fed, and the game will constantly remind you of that. The moral of your men is important to watch also, since they will break and run if you are not properly supporting them in battle. Most battles felt a lot more like just two mobs hacking at each other, then any actual strategy going on. Facing didn’t seem to matter, nor did flanking maneuvers, but Legions could charge at the other ranks to cause some moral loss and force a retreat.

Overall, I felt that the game play was solid enough for me, a complete rts and strategy newb, to do well enough and have fun. How the hardcore would see it is another matter. This game may not be hard enough or deep enough for those of you that are truly hardcore players of strategy and rts games. That will be up to each individual player, but I enjoyed my time with Hegemony Rome and felt that it played well enough to be fun.

Hegemony Rome looks decent enough, but won’t win any beauty prizes. When zoomed in, the character models are a little more cartoony than I would have liked for a game that is based on actual history. And while the towns seemed populated, with peasants and guards milling about, the level of detail on the individual units just didn’t quite do it for me.

Hegemony Roam is fully voiced by actors, which is actually well done. Though I do wish that developers would stop grabbing actors from the United Kingdom anytime they need an accent to sound “foreign”. Hearing Julius Caesar speak of the greatness of Rome in that accent just did nothing for my immersion into the game. Music quality is good, as is the sound effect during game play. All in all, the aesthetics for Hegemony Rome does the job well for this type of game, without feeling special.

Hegemony Rome: The Rise of Caesar does a lot of things well enough to make it a good, solid game – but not quite outstanding enough to really set Hegemony Rome apart from the rest of the pack. The story is taken directly from Julius Caesar’s own personal accounts of the Gallic Wars, and thus are very historically accurate – even if the name of the game is not. Game play wise, Hegemony Rome does a good job in letting RTS “noobs” get into the fight without going through page after page of stats and items to micro manage, but this may make the hardcore fans of these types of games feel that Hegemony Rome is light on depth. Hegemony Rome: The Rise of Caesar is good, not great, and is available now on Steam.