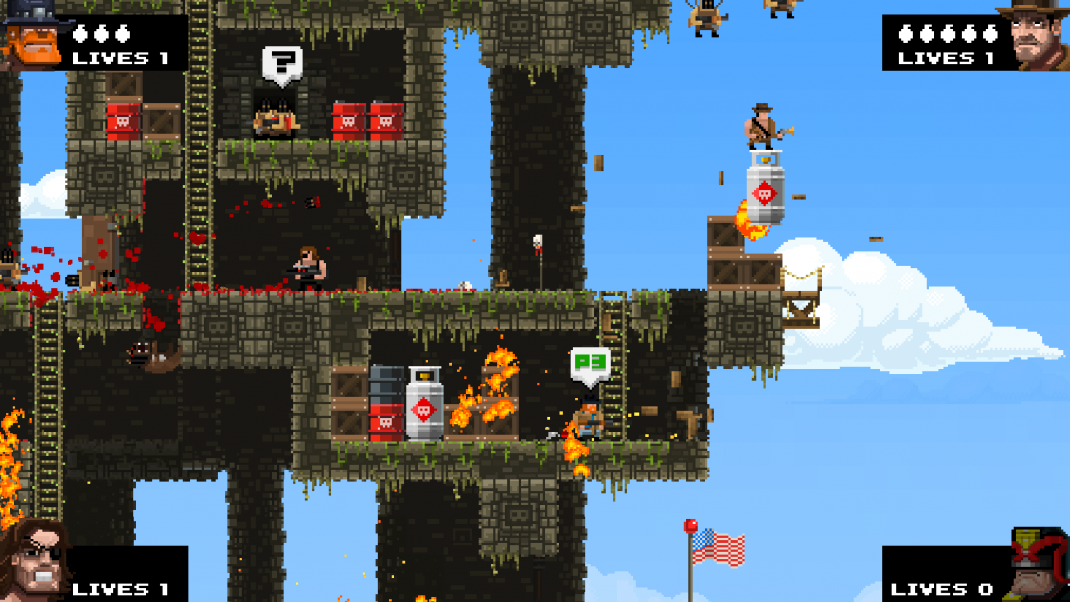 Listen up Bro! The most brotastic game has hit Steam Greenlight! If you are a Bro like me you probably already played the free Brototype from time to but now that Free Lives has a place to call Brome. Bro, can you believe back in the 80s we used to have whole conversations like this? Yeah sometimes it was dude instead of bro but the idea was the same. Bro had a bit more machismo heaped on the top of it like bacon on steak covered in nacho cheese. The games of the time reflected that with the side scrolling shooters such as Contra fulling coming into their own. Also coming into their own was the Action Hero, an against all odds warrior who fired more bullets than the population of small countries. So Free Live did the bromazing thing of combining the two into a hilarious yet addictive game.

Description:
Broforce is an action platformer for PC featuring 1980s action heroes making up the Broforce team, an under-funded vigilante paramilitary organization. The game features ridiculous violence, pixel art graphics and a fully destructible Vietnam setting. While masquerading as a run ‘n gun in the vein of Metal Slug, Broforce’s reactive environment encourages tactical play. Each bro out of the 13 the game currently features has distinctive overpowered attacks and special abilities, and mastering them all is one of Broforce’s core pleasures. Death is instant and can be surprising, but this is balanced by the incompetence of the enemy. Explosions are plentiful and very often result in chaotic chain reactions, but this shouldn’t discourage you from permanently holding down your trigger finger. Yelling “‘Murica!” while you do so is optional.

Broforce is best played co-operatively, two to four players (though single player is an option). It can be played both on keyboard and on XBox controllers.

Vehicular action sequences, dinosaurs, aliens and epic Contra-inspired boss fights, deathmatch arenas with leaderboards and rankings, a level editor, the ability to challenge friends and share custom levels, a customizable Brofort with unlockable rooms and much more to come in the full game. The only thing left to say is: brace your loins.

Features:
– More explosions, camera shake and action than anything else, ever.
– Fully destructible terrain.
– Local Bro-op play and online multiplayer bro-op.
– Deathmatch arenas with leaderboards and rankings.
– Unlockable “bros” – each with distinctive attacks and special brobilities.
– A level editor, the ability to challenge your friends and share your custom levels.
– Design your own Brofort – with unlockable rooms and additions to defend against terrorist onslaught, or just hang out.
– Vehicular action sequences, dinosaurs, aliens and epic Contra-inspired boss fights.
– Nuanced and strategic combat, explosive action and deadly stealth.
– For every terrorist killed in Broforce, a terrorist will die in real life.

Hands On:
To truly appreciate this game in its fullest you need to have lived through the 1980s and the gaming mentality at the time. Hanging out with friends in front of the TV drinking Mt. Dew, eating junk food, and playing video games until the sun came up or you beat them. Co-Op playing was best so you could help each other bust through levels though VS. games were fun too. Some games were up scrollers, usually those involved vehicles but Contra was ruling the day with it’s side-scrolling fight fest. If you were really doing it right you would have a TV with a VCR or cable nearby showing First Blood, Rambo, Terminator, or if you were into horror maybe that eternal classic Evil Dead 2.

Free Lives got this idea and nostalgia and managed to make it into a side-scrolling brofest. The Brominator, Rambro, Bro Dredd, and Brommando just names a few of the heroes you control while tearing up terrorists and the environment. Each has special abilities that will change your play style as the game randomly spawns one for you to fight with. A couple of my fave bros are Snake Broskin and Ash Brolliams (I think Williamsbro sound better but it kinda reminds me of a Civil War battleground) but all are amazing entertaining.

You can play with a keyboard but the controls felt REALLY clumsy to me on it. I tried the player one controls and the player two but felt a bit frustrated until I finally plugged in a controller. My controller is busted but luckily the buttons I needed only took up a small portion and I was blowing up the whole world and all the terrorists with it in no time. If you have been waiting to pick up a game controller go out and get two so you can have a friend play with you Co-Op and VS. and have a blast using about the same game controls you did when playing those consoles of yesteryear. You don’t have to have played the games at the time to love this one, but it definitely kicks up the bro factor.

Last Bros:
Broforce only takes itself serious when it comes to good gameplay. Playing the game is unbrolievably fun. Each character that unlocks is a new challenge and fun way to destroy everything. You will have favorites but more importantly you will just have a great time and maybe remember some nights spent in a room in front of a television making life bonds over video games and action flicks.