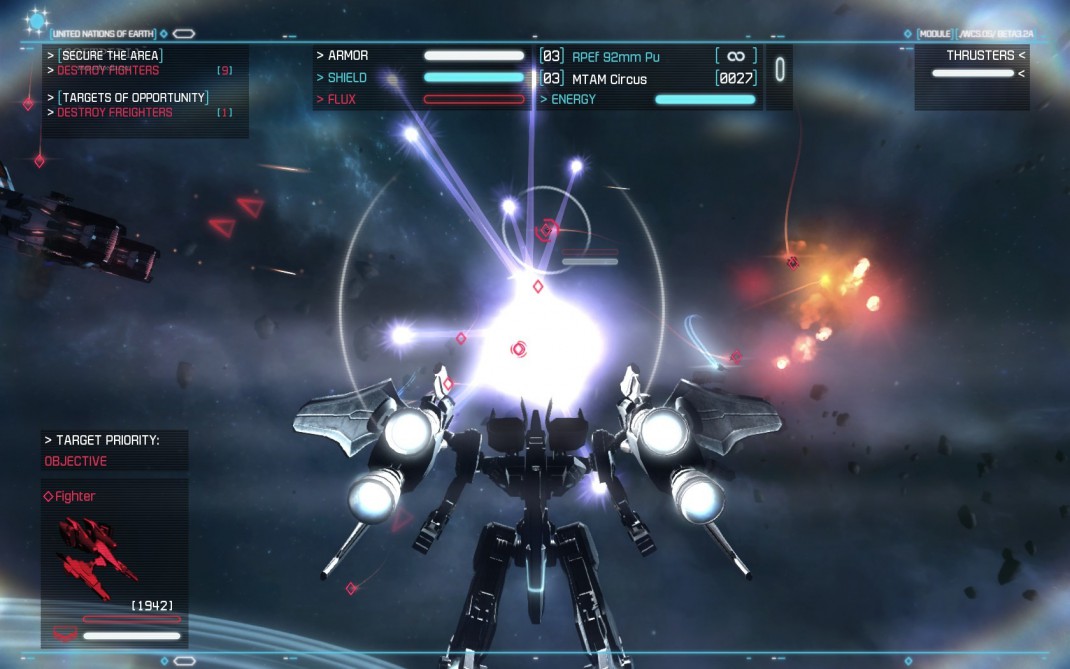 This was a particularly exciting review since it is our first review of an Xbox One title to review on GamingShogun.com!  The other particularly exciting reason the review was fun to do was though it has the sexy graphics that next gen can bring it has an old school arcade style  that dates back to… well some of the first arcades.  Strike Suit Zero is a challenging throwback without a throwback feel or a high price tag.

Description:
In the year 2299, an interstellar war rages on. In a bid to save Earth from destruction, you must take control of the Strike Suit – a revolutionary fighter craft with the ability to transform into a lethal suit of space armor. Immerse yourself in massive fleet battles where your dog-fighting skills will directly affect the fate of the cosmos.

Discover a colorful and vibrant universe, with an epic story where the fate of Earth hangs in the balance and your actions will determine the outcome: preventing Earth’s destruction is your immediate concern but preserving its future is your ultimate goal.

Engage intelligent enemy fighters and take on colossal capital ships, exploiting weak points in their super-structure to blow them apart. Upgrade your ships and customize your weapon load-outs to tailor combat to your tastes. Take advantage of four unique craft, including the Strike Suit, to experience dogfighting action as you’ve never seen it before.

This Is Space Combat Reborn.

Hands On:
Oh the games I wish I owned an Oculus Rift for… Strike Suit Zero Director’s Cut can be played both inside a cockpit view or out of cockpit mode in a third person view. If I had the latest-gen Oculus Rift or a flight stick for the Xbox One, I would totally go crazy with cockpit mode and this would be a different game experience. Instead, I found myself using the third person mode quite a bit and it was a very familiar, but still very fun experience.

In the main campaign you play a flight jockey who gets a new toy. There is a lot more to the story than that, but the story doesn’t draw you in that much and you mostly feel like different bosses are fighting over where to point you to kill. That’s fine, there is lots to kill and crazy space battles result.

When in ship mode, your fighter feels like a space ship or airplane and flying around can easily disorient you without a horizon until you get used to it. As a result, there are large boundaries, resembling nets, to your flight area that keep you from going off into the vastness of space a la Darth Vader at the end of Star Wars. These are handy at the beginning but, as you get more comfortable flying (or if you already play a lot of arcade flight games) you can find these boundaries as a challenge instead as you try to clear gun range to refresh your shields for another strike. These also make if feel a lot like an airplane flight sim with a deck, max height and area of combat. You dog fight with smaller ships and perform strafing runs on larger ones. 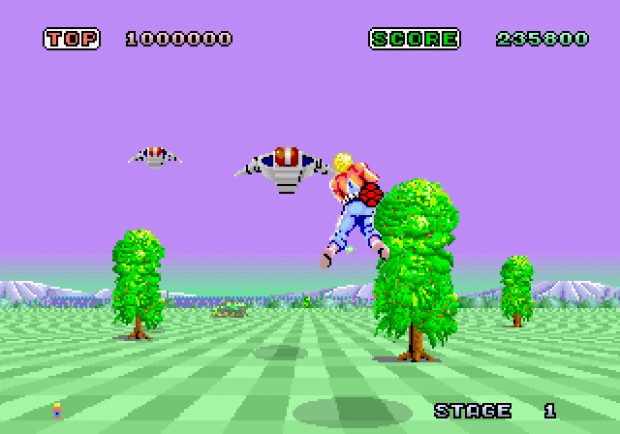 It’s when you go into robot mode that Strike Suit Zero Director’s Cut starts to have a different feel and, in many ways, an older arcade feel at that. It reminded me a lot of SEGA’s Space Harrier from 1985 – but without the ground. You move around the screen as a robot shooting at enemy ships an moving around the screen to avoid incoming fire. There is nothing wrong with Strike Suit Zero Director’s Cut reminding me of such a classic game, as they have done things to perfect its play – adding limited missiles and the ability to switch back and forth to fighter form. As a result you spend your time going back and forth between the two ship modes, strategically picking the times when moving around the screen and shooting is preferable to flying around a map dogfighting and strafing.

Last Call:
Playing Strike Suit Zero Director’s Cut is like playing a mix between two styles of games using the style that works best for each enemy. No matter the mode you play in, it is all arcade action and makes for challenging hand-eye coordination fun. There is some strategy to gameplay but the story only plays into it for the different endings. I see replayability in trying to get through the game a second and third time staying in fighter mode or robot mode the entire time. That or if you get frustrated about missing time marks or high scores on levels. No matter how you play it, Strike Suit Zero Director’s Cut  is a very fun experience and it is only a scant $15 dollars.