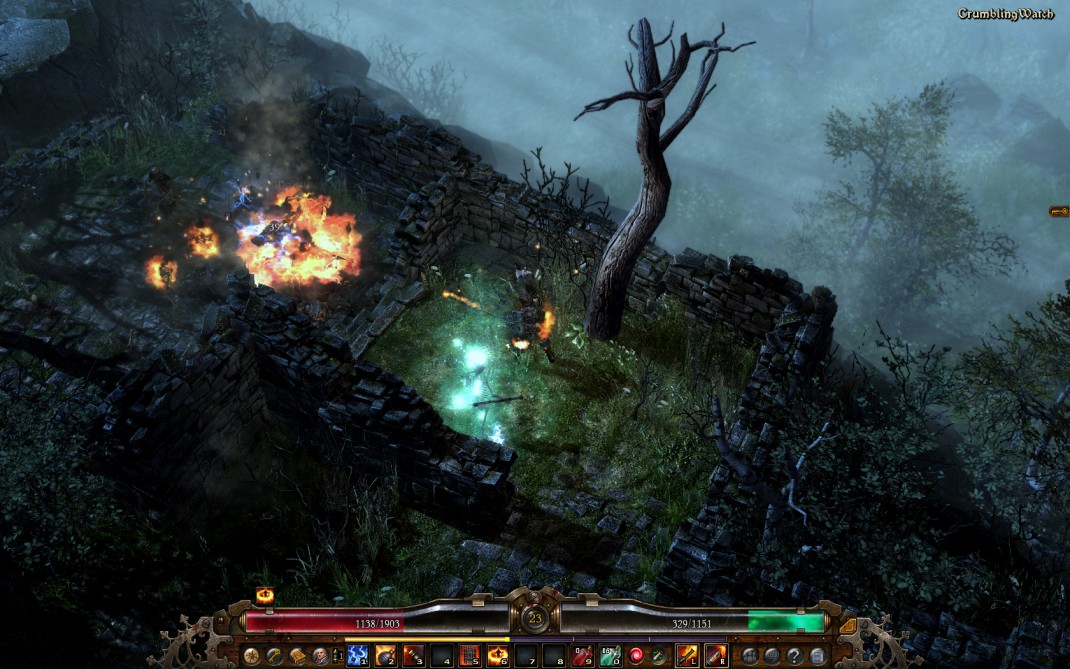 My Kickstarter reviews/previews continue this week with Grim Dawn, an action role playing game developed by Crate Entertainment. Grim Dawn racked in an impressive $537,000 on their Kickstarter, almost doubling the amount that Crate Entertainment was asking for. In order to help development further, Crate Entertainment has put Grim Dawn up for sale on Steam, following the same path that Minecraft and Day Z have taken, selling pre-release versions of the game to fund further development. Now, I have some strong feelings about this current practice, but that will be a discussion for another time. Let’s just focus on Grim Dawn today.

Grim Dawn is an action role playing game that follows in the foot paths of games like Diablo and Torchlight. Set in a fantastical Victorian era landscape, Grim Dawn begins you as one of four classes (soldier, demolitionist, occultist, and nightblade) with a fifth class coming in a later update. These pretty much break down into melee class, range class, spell caster, and assassin. One of the features of Grim Dawn that hasn’t been seen in the other games mentioned is the Dual Class System. When you hit a certain level, you may add a secondary class to your first, to gain access to their skills. Sure, the soldier can use pistols already if he has a high enough cunning, but if you really want to be better at it, dual class into the demolitionist.

As you level up, you get to increase one of your three characteristics and gain levels on your skill tree. The characteristics are broken down into three simple stats: cunning, physique, and spirit. Cunning essentially is your ability to hit, dodge, and be fleet on your feet, while physique is your strength, constitution, and durability represented in one number. Certain classes will want to focus more on one stat then the others, to be sure, but you will still need spirit as a soldier in order to use some of your skills. Skill trees look like most all other skill trees that have ever been created. You are given a set of choices at each level to choose from, and these can either be improved upon or you can select another skill if you have reached the minimum level. There is a default skill for each class that can be chosen anytime, and that skill increases your states instead of giving you another skill. Don’t like the choices given to you at a particular branch of the skill tree? Then put those points into the default skill and boost your stats.

The world of Grim Dawn is fairly generic in aesthetic. You begin in a ruined village, where you were formally a prisoner that was possessed by a demon. The inhabitants release you, and set you out on tasks to help them secure themselves against the relentless undead that has been plaguing their town. Quests follow the typical format; quest givers are seen with a yellow exclamation point over their head, they go through a dialogue describing the quest, then will have a question mark over their head until you return to fulfill their quest. Traveling across this land is down by foot, with rifts that are open around the world that act as portals to teleport you to checkpoints or back to town. Like Diablo, you can also create these rifts yourself, to get you out of a dungeon to repair or sell of your loot.

Crate Entertainment is going for some interesting features for Grim Dawn. Two of the more interesting features for me is the faction based questing and the choice system. At points during the story, you will be faced with two factions and must choose to help one or the other. Helping one faction hurts your reputation with the other faction, but will allow you to earn rewards once your reputation is high enough. I had two immediate feelings when I heard this. One was “Hey, that might be interesting to see how that works in an arpg,” then it was immediately followed by “Damn, now I have to grind factions, like I did in World of Warcraft”. The other system is the choice system, where you will be faced with certain choices, that will change the face of the world. By helping out a village to fend off an attack, the village will grow and prosper. If you choose not to help, then it will wither and die. While I am not a big fan of these perceived moral systems, it will be interesting to see what Crate Entertainment really can do with it.

As of today, Grim Dawn has two acts that are ready to play, with more coming down the road as Crate Entertainment finishes up on it. There are also some features that are still not in game yet, like multiplayer and most of the faction based questing lines. This is a work in progress, and is being sold as such. For a game that is technically still in development, it was surprisingly bug free for me. This tells me that Crate Entertainment really is taking the time to look at this game and is trying to put out the best possible game for the market. While Grim Dawn may not take the place of Diablo II in my heart as the best arpg of all time, it will definitely earn a place in my play rotation as development continues. This is a game to watch! Grim Dawn is available now through Steam Greenlight to purchase as a game in development.