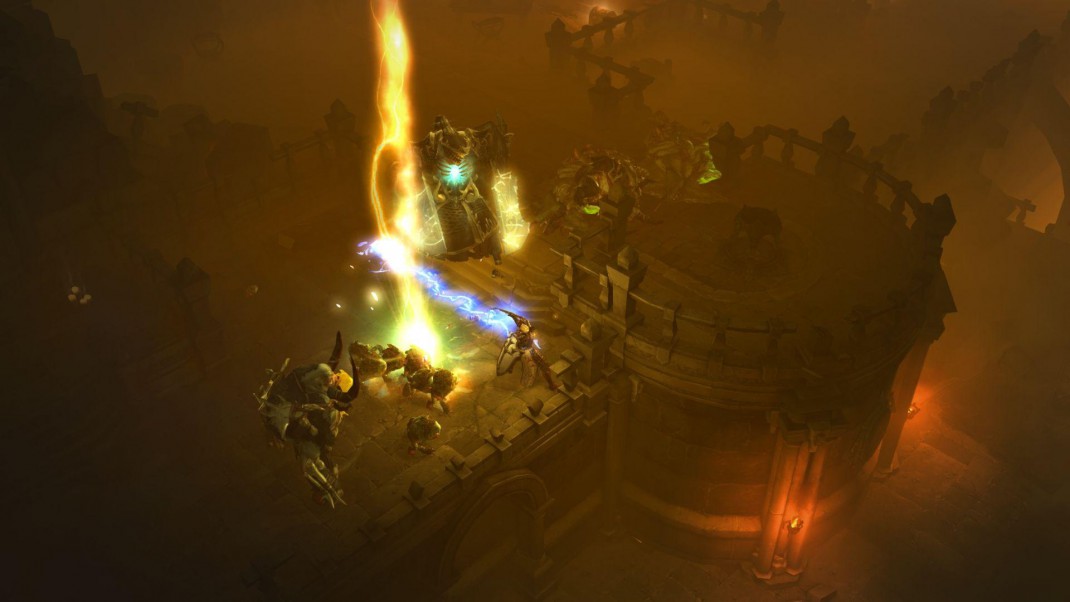 After a very extended break from Diablo III, and a feeling of lingering disappointment in the longevity of the title, I have returned to reintroduce demons and angels into my life. Given that I originally reviewed the title, it is only fitting that I give it another go for the release of Diablo III: Reaper of Souls expansion pack. First off, my original review was not very hard on the game, mostly due to the fact that the vast majority of its issues were presented at endgame, and revolved around the auction house. If I had gone back for a second review, post-leveling, I would have painted a much more bleak picture of the new world of Sanctuary – a world filled with poor uninspired items, abysmal drop rates to support the auction house, an unbalanced and untested final playmode, and more. Given all that, you can imagine my skepticism when this expansion was announced – many months after everyone I know had stopped playing the title.

You can find my original review here, for those interested in prefacing this review with some history:
https://gamingshogun.com/2012/05/30/diablo-iii-review-pc/

Reaper of Souls is downright BADASS and boatloads of fun. There, I said it.

It is clear that the developers went back to the drawing board on this expansion, ripping the guts (along with both auction houses) right out of the game and making killing demons and collecting loot fun again. They even seemed to have smoothed out the engine in the process, eliminating the bouts of micro-stuttering and sluggishness, leaving smooth-as-glass gameplay remaining. There are a few exceptions to this, such as specific areas of act 3 and the new act 5 where fire and smoke effects cause a bit of performance loss on all systems. Outside of this though, the game feels far more slick and responsive than ever. The classes have been re-balanced thoroughly, and though there are bound to be things that are too strong or too weak still, many more build variations are viable in this new Sanctuary. The Paragon end-game leveling system is far better, allowing for a player to continue to level up and improve attributes across all characters on their account seemingly forever (no Paragon level cap, and levels are account-wide now).

The addition of more useful stats, and the removal or readjustment of bad ones, is also of note, as well as some additional monster affix abilities that deepen the type of elite packs you can encounter when exploring. Music in the new Act 5 is extremely satisfying, at many times subtle yet just creepy enough, and the atmosphere of the new zones is dark, foreboding, and ominous in a way that a good Castlevania title or a good Resident Evil title might grab you. The story picks up where the previous one left off, with a fallen angel named Malthael deciding that he would take matters of the eternal struggle between the angels and demons of Sanctuary into his own hands. Though very polished, the story is just to wet your appetite for Adventure Mode and Nephalem Rifts, the true new gameplay focus of this expansion. No longer are you confined to a single act within a game – you can travel the entirety of act 1-5 through any waypoints, and explore zones marked with quests to gain experience, gold, and loot caches (which spill out random items in glorious fashion). While doing this, you will collect items which can be used to active Nephalem Rifts, randomized zones of between 1 and 10 maps that can be of any tileset from the game, with any monster combinations from the game. TRUE RANDOMIZATION! Some of the maps I have encountered were literally littered every 10 feet with elite packs, leading to total mayhem.

Blizzard has recently announced that they will be adding “Seasons” to the game (similar to ladders from Diablo II), as well as some form of scaling Nephalem Rifts with leader boards for progress potentially. This should be coming in the first major patch to the expansion, and shows a commitment to continue to grow it – despite it being a 40$ game with no continued monetization. This harkens back to the days of Warcraft 3, Diablo II, and the like, and makes me excited to continue to play this now GREAT title and see what Blizzard has in store for it. All-in-all, I cannot recommend a revisit to this title enough for ARPG fans out there. I know the original launch burned many of us. I know many will scoff and continue to put time into Path of Exile, Torchlight 2, and other titles in the genre – content to write this one off and remember all the bad things about its launch. Please, PLEASE, do your self a favor and give it another chance. It might just be the best 40 bucks you spend this year, or for some time to come.

Can’t write any more. Must play more Reaper of Souls…