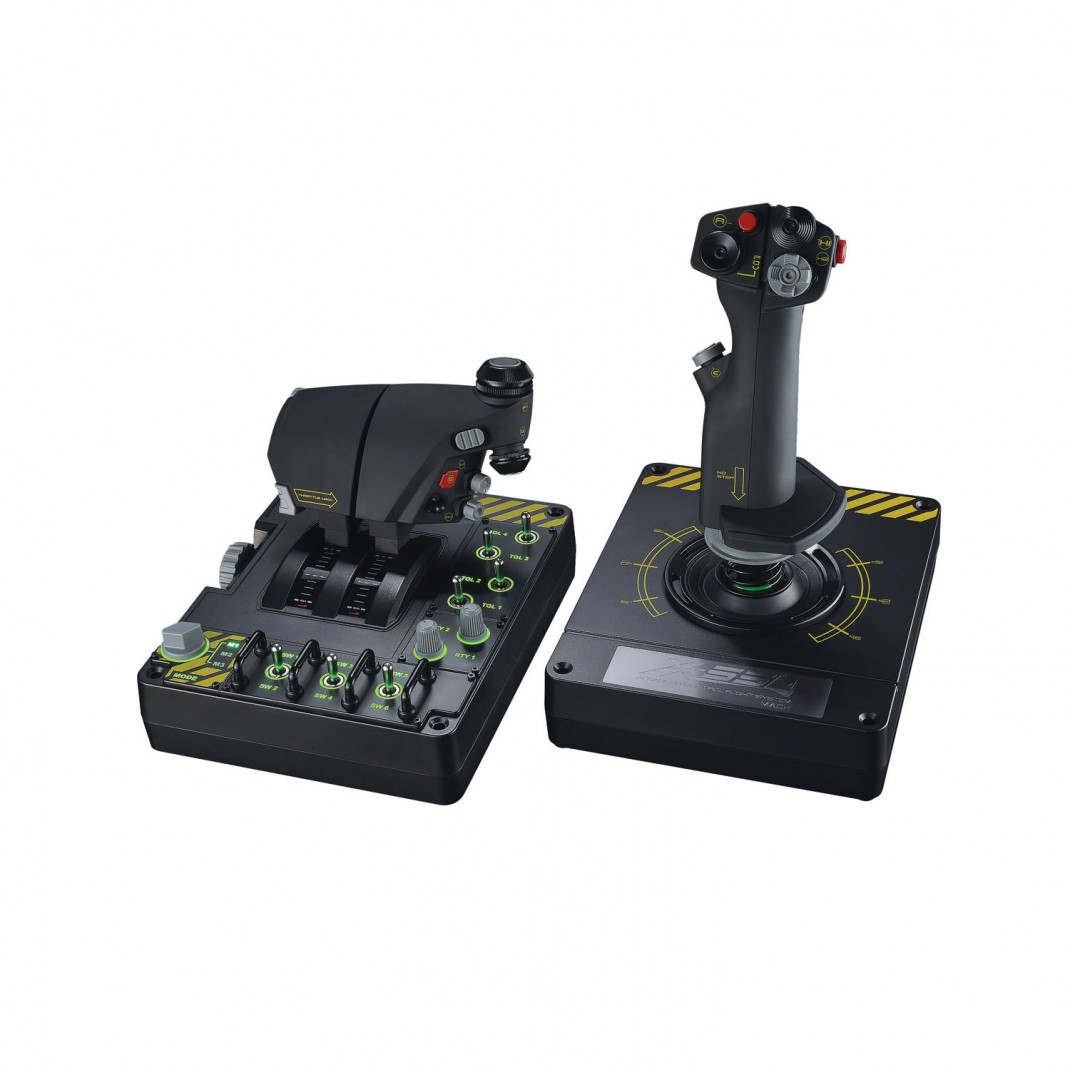 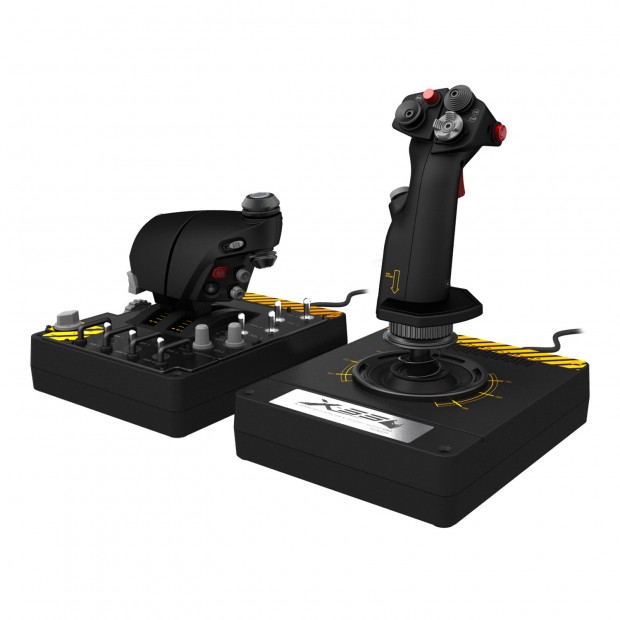 When GamingShogun.com hit CES 2014 this year, one of the main things we wanted to make sure we saw in person was the Saitek X-55 Rhino H.O.T.A.S. (Hands On Throttle And Stick) system. Once I got to give it a feel I HAD to know what it was like to give it a play. So, about a week ago, the Saitek X-55 Rhino H.O.T.A.S. arrived that was still so prototype in packaging it didn’t include any of the papers – just the peripherals themselves. Like a kid at Christmas I had it unpacked and hooked up in no time, popping open games and running it through its paces.

Description:
The Rhino features brand new, fully programmable drivers, enhanced 16-bit hall-effect sensors in the axis, swappable springs for the joystick so you can dial in your preferred stick tension, twin lockable throttles and a friction adjustment that can be set on the fly.

The throttle and stick have their own dedicated USB allowing more freedom of customization and compatibility with some of your favorite classic games. Saitek’s new software provides the ability to completely customize all of the X-55 Rhino’s axes and buttons. On the axis side, you can adjust deadbands and response curves to fine-tune axes to respond just like an aircraft’s real-life counterparts. On the buttons and toggle side, you can assign any number of in-sim directives, such as speed brake, flares, target lock and pickle weapon. The software also allows programability for an array of mouse and keyboard commands – from basic single-key inputs to very advanced, timed, and macro commands. 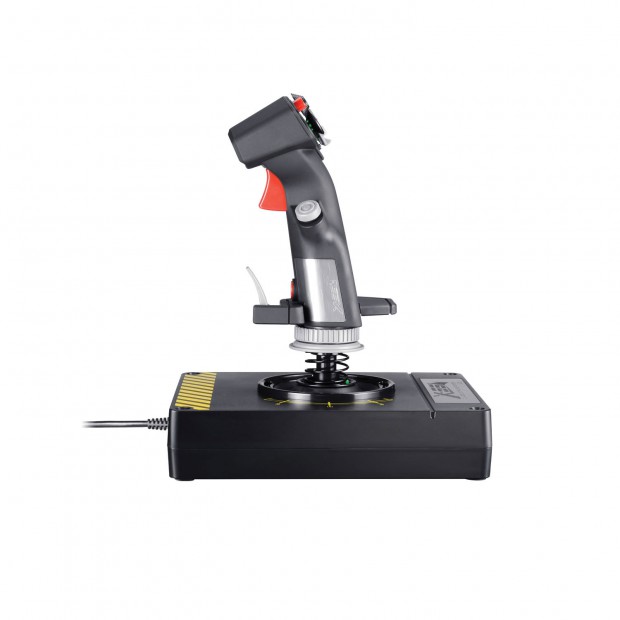 Hands On:
I had to give it a run in some of the games I have been playing a lot. War Thunder was the first thing I tried it on, since it was on the list of games that would be compatible. At the time of this review, most of the profiles aren’t set, so I went into settings on every game I played and built my own profiles. If you have never done this I would highly recommend it, just be in your “Zen place” and in a good humor. Nothing like going to start a dog fight and finding your yaw is entirely stuck to the left so all you can do is fly in circles. This might be fine for sight-seeings, but not so good when someone realizes that is all you are doing and easily shoots you down. Or the controls didn’t register the pitch axis and you find yourself only able to fly up to max altitude, stall, then shoot anyone who happens to be below you. In some cases it still maintains keyboard instructions and I just had to jump on that real quick but in a lot of cases it over writes them. So if you happen to not program a gun/cannon fire then you just go ramming speed into another plane or the ground. 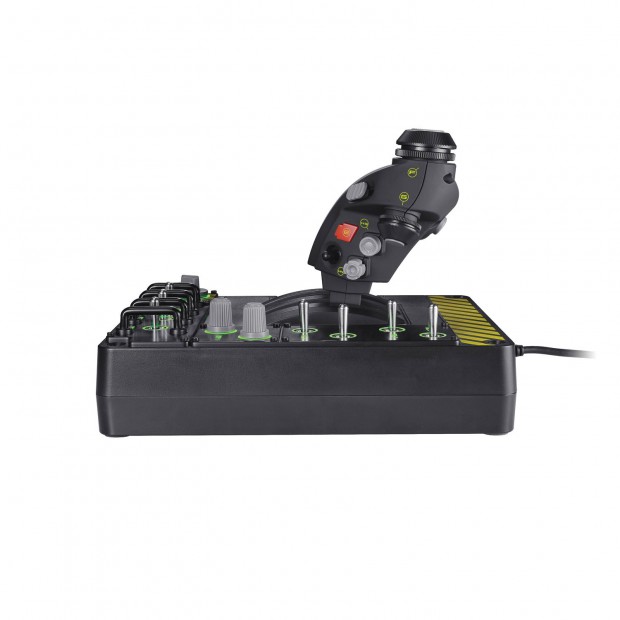 Once everything was nicely programmed I played War Thunder on a couple different modes, one that was arcade and one that was more realistic controls. It was only my second time playing War Thunder and my first time playing the new system but what amazed me was how quickly I felt comfortable with the separate throttle. It felt so natural to pull back on the throttle as I pulled an evasive maneuver then go into a dive to hit a ground target, maxing the throttle when the aircraft was about to go into the deck. I have a couple other flight sticks for different systems and each of them has a built-on lever to be used as a throttle but since that lever is so tiny and a bit awkwardly located next to the center of the stick it really took away from the experience. This system not only has the stick and throttle on separate units for placement in your personal cockpit (in my case TV trays and cardboard boxes) but it also has extra toggle switches, buttons, dials and mini sticks all over the two sections to allow programming for the more complicated sims. With an arcade style game you only need the buttons on the stick for the most part along with the throttle handles to do all the commands.  The system also has a know to adjust the tension on the throttle and a complete spring system to adjust the force required to move the stick. 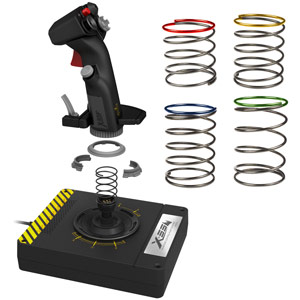 When you get in a full system flight sim you need to assign toggles for starting each power supply, engine, flaps, brakes and plenty of other stuff which the Rhino H.O.T.A.S. can easily accommodate. The  dual throttle levers can be locked as one unit or you can even throttle up the left and right engines separately which in some flight sims and games greatly increases your capabilities. You can even build three separate profiles for the same game, save them down to one of the three event memories and turn a dial to choose between each. So if you see yourself jumping into a black hawk you are probably going to want an entirely different control scheme than a fixed wing aircraft like an F-16. Doing your profile building before hand means just turning that knob for seamless play. 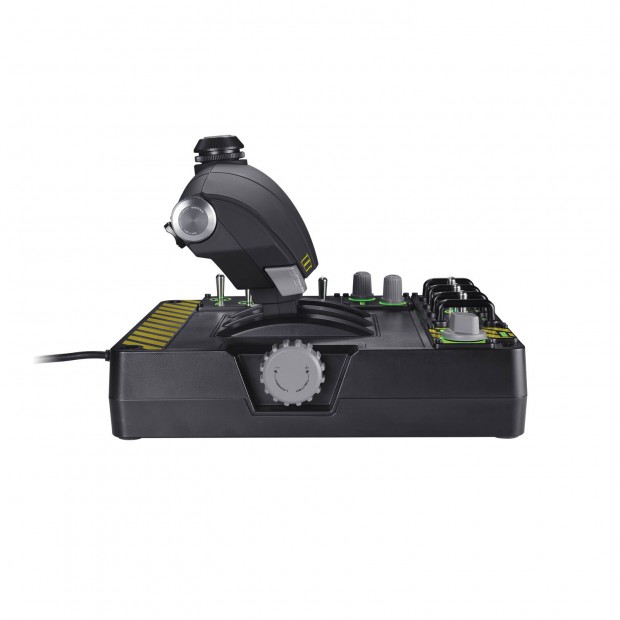 After building a few profiles you really get the hang of it. Saitek expects to have a decent collection of profiles at launch with the community no doubt creating more as it goes. Don’t feel you have to be limited to what the site or paperwork states as compatible games, if you think a H.O.T.A.S. system will enhance your experience on any game feel free to give it a try, you might be surprised. I tried the system with listed ones such as arcade style play like World of Warplanes where my D/K ratio showed immediate improvements to serious sims like the realistic mode on War Thunder and DCS World. I didn’t let that stop me though, I got onto Battlefield Play 4 Free and built profiles for the planes, helicopters and even the land vehicles such as the Humvee and tanks. There is a satisfaction to pulling pushing the throttle forward on a tank while using the stick to turn and aim the guns. It felt a bit like operating an automatic transmission, I put the throttle back to back up and forward to speed ahead, especially in “technicals”, weaponized civilian vehicles. I think the only time it didn’t feel quite right was when I set it up for first person shooter just running around, then the WASD and mouse just felt better but that may very well be because of decades of using that setup for that.

Some games weren’t friendly towards control customization or recognizing a separate throttle system but those were in a tiny minority – usually older games and really only a couple. Most games are very friendly to changing the key settings and peripherals that you might want to bind them to. There is even a system on the side of the throttle that can be used as a mouse so that if you are able to program the interface outside of matches to choose vehicles and matches you may be able to play games without the use of a mouse as well as a keyboard.

One of my favorite factors about the X-55 Rhino is that it doesn’t feel the slightest bit cheap, no part of it.  Quite the contrary it feels like it could have been pulled right from a military vehicle and had USB cables attached to it.  It feels solid in every aspect including whenever you click a toggle or switch and pressing every button this system was made to last and feel exactly like the real thing (I have been in the seats of everything from Hueys to Globemasters and I know how the real deal feels). 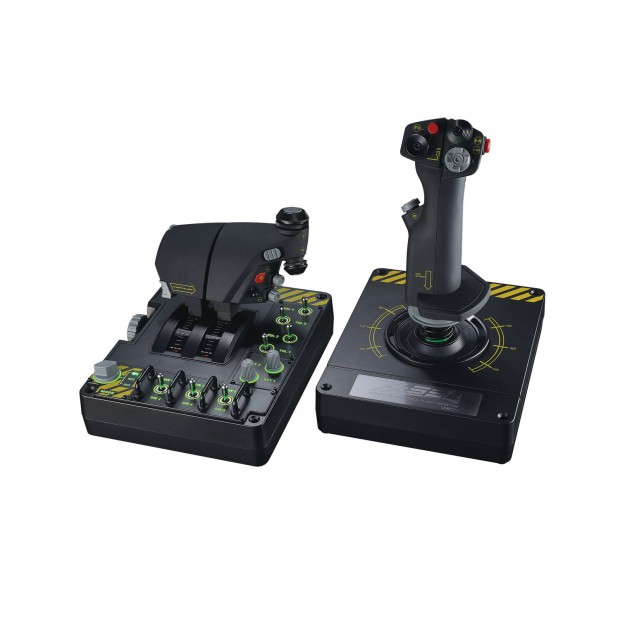 Last Call:
Saitek’s X-55 Rhino H.O.T.A.S. performed terrifically in all the expected ways and often surprised me with its amazing versatility. The Rhino not only delivers as a great system for flying everything from arcade style games to hardcore flight sims, it enables you to use it to control just about anything your imagination can come up with. I plan on getting Titanfall on the PC simply because I can’t wait to see the Rhino in action driving mechs. I am also going to track down some other mech games just to give the system a run at them. I can honestly say that the Saitek X-55 Rhino H.O.T.A.S. has changed the way I look at PC gaming by expanding the experience.