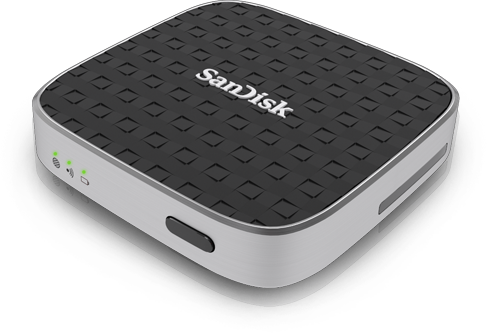 One of the most interesting things I saw at this year’s Internation CES in Las Vegas was the SanDisk Connect Wireless Media Drive. SanDisk, often known for taking risks, displayed a small silver and dark gray box that, when powered on, generates its own wireless access point and allows iOS and Android smartphones to be able to use it as a media server. I know so many iPhone users who have thousands of photos on their phones (I am afraid to say, I am one of them) so this would be a great way to keep your photos and videos safe while freeing up space on your phone.

In addition to being able to use the Connect Wireless Media Drive as a media server, you can also plug it into a Mac or Windows PC and access its contents directly. For the photographers out there, this means that you can take your drive to your local photo printer, plug it into their computer, and select which you want to have developed. The device comes with either 32GB or 64GB of internal memory but each are expandable by way of an SDHC/SDXC card port so you will not run out of room anytime soon.

The server capabilities of the SanDisk Connect warrant special mention as it can support up to 5 HD video streams simultaneously. This means that if you and the family are going on a road trip, you can all stream movies, etc from the Connect while on the trip – except for you, keep your eyes on the road, pal! The device charges via USB cable and is spec’d to run for about eight hours of continuous streaming per charge. This was fairly accurate when I was simply using my iPhone 5 connected to it all day. For something capable of outputting so much wireless energy, I was surprised the battery is as good as it is.

Overall, the SanDisk Connect Wireless Media Server is such a handy device, I can’t recommend it enough. It is small, lightweight, and extremely capable of handling the photos and videos that would normally take up valuable space on your smartphone.