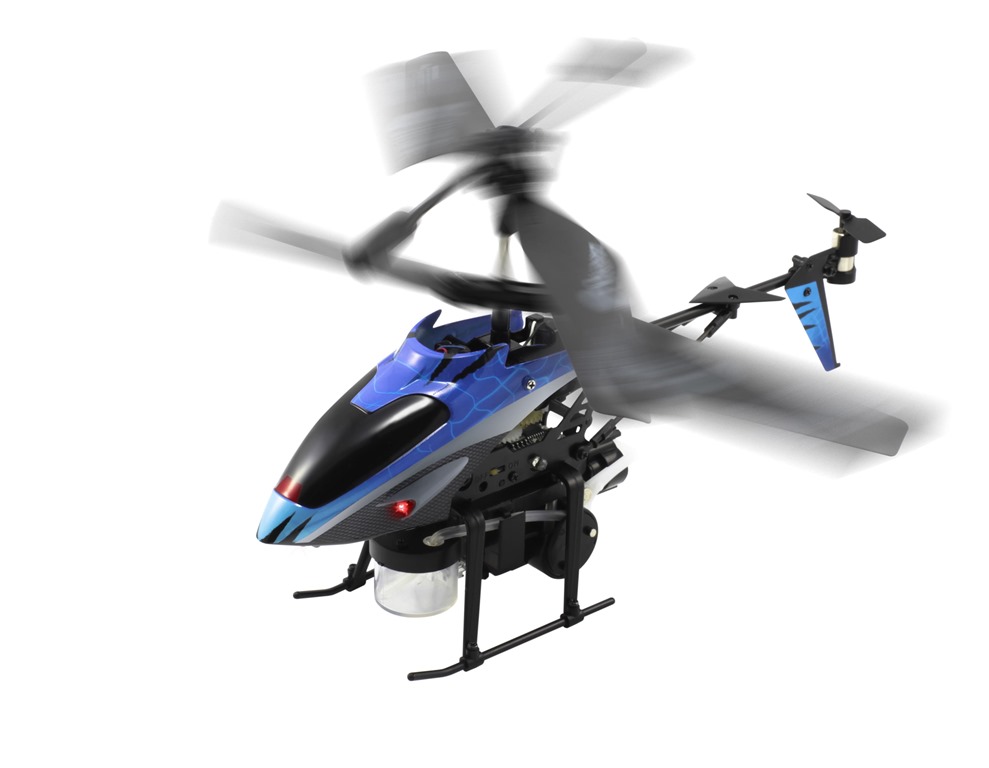 Ask anyone on the team – when it comes to gadgets, I act like a kid. When it comes to toys, I become a kid.  I laugh, become prankish, and in general shed about 32 years off my maturity when I get a toy.  So when Swann sent us their Bubble Bomber RC Helicopter it was as if Christmas had arrived on our doorstep. The question was would it be so difficult to use that the novelty would wear off before the battery life like one of my previous flying RC ships? 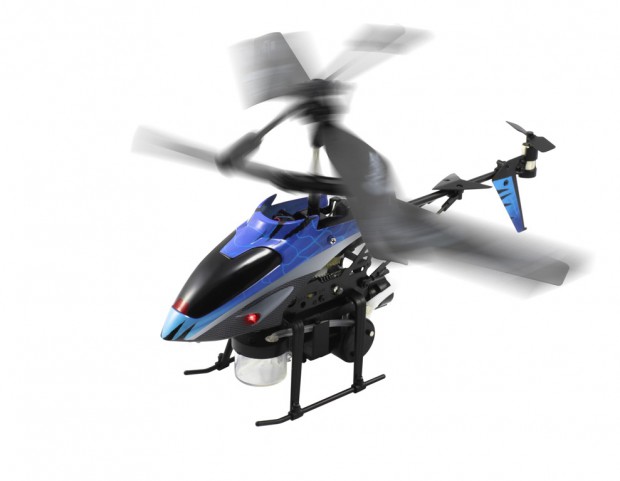 Description:
Meet Swann’s Bubble Bomber RC Helicopter. It’s proof that you’re never too old to have fun. The Bubble Bomber has all the cutting edge features of a modern remote controlled helicopter including powerful 2.4GHz wireless transmission, video game-styled controller with dual joysticks, trim control and more. It’s designed with Swann’s Easy-Fly Gyro technology to make it surprisingly easy to fly. Best of all, the Bubble Bomber can dump bubbles on targets you select at the push of a button using the remote control. It’s like being at the helm of a mission where your key objective is get up to mischief. Bombs away!

Hands On:
Ok the moment you fire this bad boy up you can’t help but smile. The body has a sweet looking grey and blue paint job but the lights are all police: flashing red and blue with a search light on the front. They can be turned off which helps conserve battery life, especially in bright daylight where it is less exciting but they look so cool when they are going.

Anyone who had never flown an RC craft have a quick lesson to learn in aerodynamics which they will either learn and embrace or give up flying ships forever. My first experience was with a drone, lower end model without a gyro or self stabilizing unit. It is fun as it takes off, then either dashes into an object or loses it’s air cushion stability and flips. It has sat for many months on display with an “I will master that another day” approach to it. Admittedly it does look nice on the stand.

If most of that last sentence was just some sort of techno babble to you that’s ok because most of those issues aren’t involved with a Swann RC. Swann realized that most of the fun in flying an RC aircraft is in the flying, not the mastering. They put in a gyro balance unit into all of their mini copters and make the trim as easy as pressing a left or right button if you feel the need. In other words you don’t need to know too much about aerodynamics to fly one, ignore the L/R buttons, don’t worry that a gyro isn’t just a Greek dish. Try to be gentle on the control adjustment and use one lever to lift off and the other to go directions, not much different from a game control (the remote actually looks like an XBox 360 remote). If you do care about why the plane crashes into the ceiling when it gets close or why it gets unstable too close to the ground the instruction book does explain it quite well.

Other buttons let you control the lights (on/off, flashing pattern), turbo for a little boost (advanced, you won’t need turbo anytime soon), and one of the most interesting buttons… bubbles. This particular model has a built in bubble blowing system which is just something you don’t see every day. This particular model is built with a reservoir in the front to hold bubble fluid and an auto bubble blower system in the body leading to the back where they come out. They are cute little bubbles about the size of a nickel and can be used in play as dropping bombs or to torment/delight family members by raining bubbles down upon them. If this is performed by a child (or a childish adult) supervision should be required so that an RC helicopter with spinning blades doesn’t rain down as well. It goes through bubble fluid pretty quick and the fluid is pretty hard to load (think I spilled more than I loaded) but it is a fun trip while it lasts. 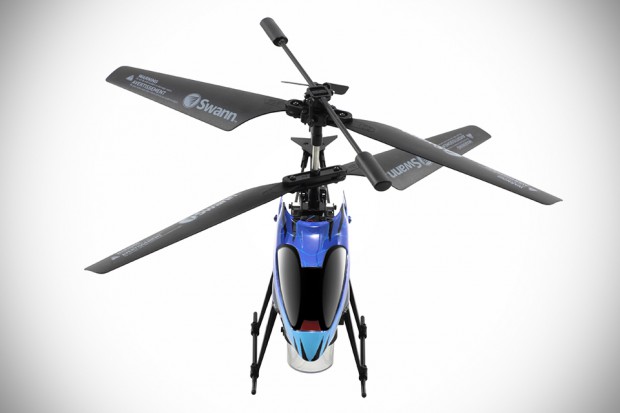 The blades may sting a bit on contact they will probably survive that impact and many others. Swann built the blades to fold upon impact with a surface adding to their durability and the frame of the helicopter is metal adding greatly to it’s toughness. When I opened the package and saw the spare blades I was a bit concerned but after many cringe worthy crashes I forgot where I left the spares and stopped being so worried. This little helicopter can do some fun stunts and flying, spectacular crashes just became part of the play. I didn’t try for them exactly but I was laughing instead of cringing soon.

Flight time between charges is estimated at 7 minutes. That sounds like a bummer and I remember with RC cars it definitely was, running them up and down the street with little control required the time flies and battery dies. There is something about RC aircraft though where you get so excited about getting them airborne and avoiding obstacles that the time doesn’t fly as fast. Maybe it has to do with getting pumped when you manage a minute of air time dodging household items then crashing because you get too low or too high or someone bats at it. RC car time is continuous use whereas the copter isn’t using much juice isn’t flying because of a crash. I played with it for over a half hour at a time without running out it’s juice, though when I was bubble bombing one of our cats with all the lights on I was probably getting close. Flight time with minimal lights and no bubbles going seem to last a long time so don’t sweat the 7 minute mark.

The aircraft is designed for indoor because of one major reason: air. Swann RC copters are tough enough to crash into harder surfaces than a sofa (man I hit the sofa a lot) but it doesn’t take much of a disturbance to take down ANY RC copter. Without getting too technical helicopters have difficulty in winds higher than 50 miles an hour, these copters are 1/80 the size of a standard helicopter making it 80 times more sensitive to wind. At that rate remote helicopters have trouble at .628 miles per hour which is a speed air conditioners and household fans can reach, yet alone old Mother Nature. If you can find a good open space without wind go for it, this baby has over 100 ft. transmission range and a great vertical climb, give it room to run and it will fly like crazy.

Last Call:
The bubbles are a bit hard to load, maybe a little open and closable hole to allow air to escape would make the bubble solution go in easier without having to fight so much. Otherwise the Swann Bubble Bomber is a beautiful, fantastic and easy to use RC flying machine. Strangely I think I have more holiday spirit now because I always wanted one of these growing up but they were too expensive, too difficult to fly and required too much room. The Bubble Bomber solves all those issues and adds the magic of falling bubbles.