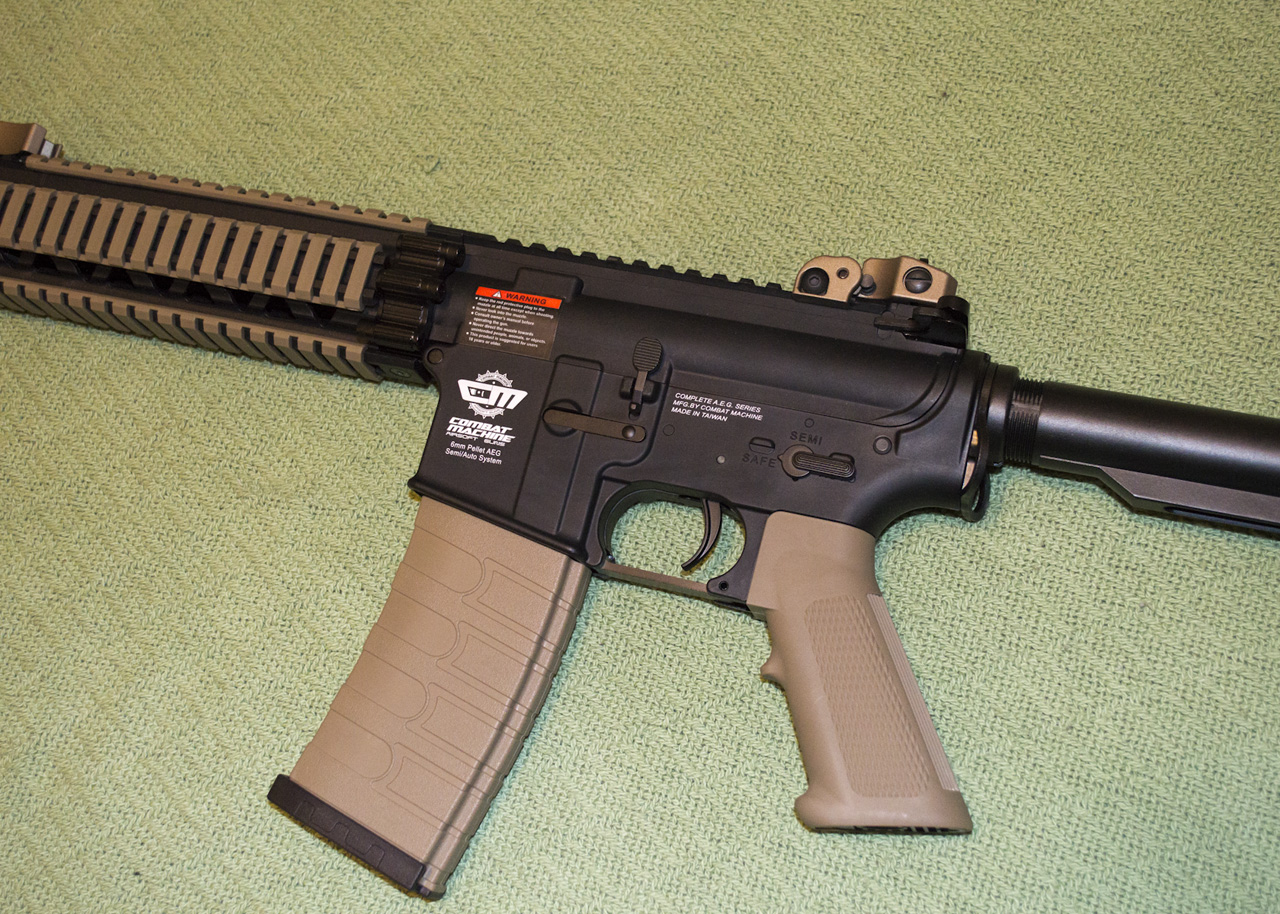 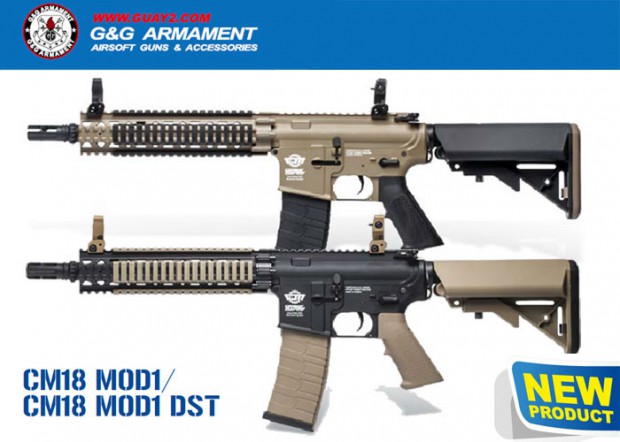 The G&G CM18 Mod1 is one of the company’s “Combat Machine”, intermediate level airsoft rifles. This airsoft gun is made mostly of ABS plastic – including the rail system, upper & lower receivers, stock, and mostly everything else save for the charging handle, screws, flip up sights, stock tube, and bolt release. While it is true that being plastic makes a gun less durable than metal over the course of time or in receiving impacts, it also means that the CM18 Mod1 is a VERY light airsoft carbine to field. Being light weight has its own benefits as well. The trademarks on this airsoft gun are cool to look at but simply painted on as opposed to more advanced airsoft guns which usually have some stamped metal trades. Again, this is their Combat Machine line of intermediate airsoft guns, so it’s to be expected.

Internally, G&G comes through with a metal version 2 gearbox which is fully upgradeable but very nice right out of the box. G&G has put a lot of quality into the gearbox of this airsoft gun and it shows. The gun visited our chronograph and we were happy with it at about 345 FPS, which is great for indoor play. We were able to get a rate of fire of about 14 RPS while using a 9.6V NiMh battery – again, decent for indoor play. We experienced no hams or misfires while playing. In fact, the magazine was really cool in that it fed every single BB it had in it – but more on that later. Using the fire selector switch is smooth which crisp detents for each fire select position – something that I like to see in all my airsoft guns for both comfort and functional reasons. If your selector switch is really squishy, you might not be able to effectively engage a particular fire mode or get caught in-between positions with the heat is on. With as crisp as these detents are, it is very easy to move from one to another and “feel” when they are reached. 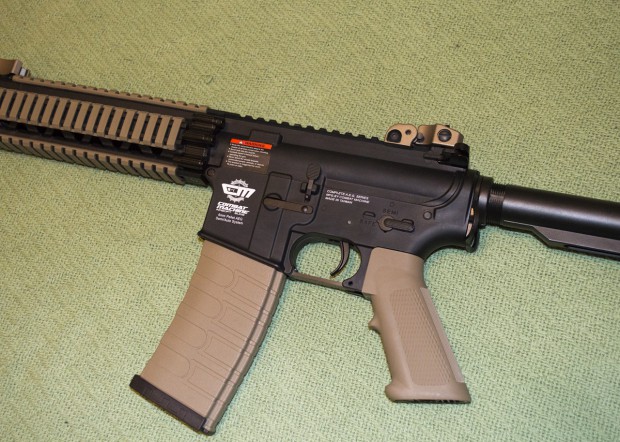 The included 120 round, mid-cap magazine has a cool, Magpul EMAG style look while also featuring an extending follower which will eventually be used in the company’s upcoming line of MARS gearbox airsoft guns. Company reps tell me they should have some more on these new airsoft guns at the SHOT Show in January. Apparently, the extended follower will stop the gearbox when the magazine is dry. Right now, this extended follower pushes every last BB out of the magazine. This is a real bonus as it means that you get to fire EVERY BB from it – as opposed to many midcaps which leave a couple in the mag due to poor spring tension or length.

My biggest issue with the CM18 Mod1 is the matter of its flip up sights. From an aesthetic level, they are pretty large with strange, flared sides which, along with their gaudy gold/tan coloring, resemble something that would be found at the Luxor Hotel and Casino in Las Vegas, NV. Also, engaging the sights is a chore, especially when you are wearing thicker gloves, as it requires you to press in a small piece of metal to unlock the sights. The problem is that this piece of metal is so small and close to a larger piece of metal (the base of the sight) that it can be hard to reach when needed. My advice is to either use these iron sights in a deployed position all the time or remove them altogether and use another optic or sighting solution. 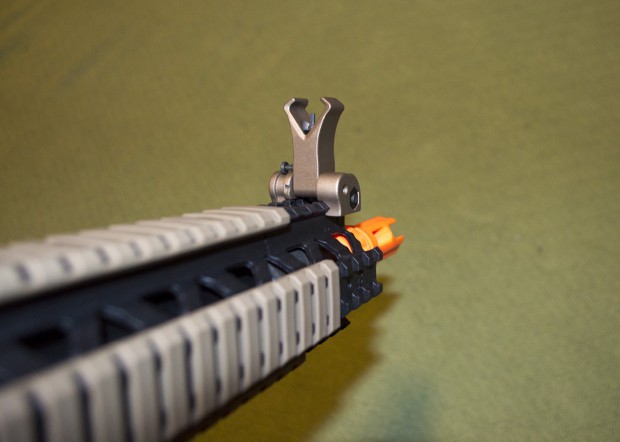 Overall, the G&G CM18 Mod1 airsoft gun is a fine choice for anyone looking to start out in the sport of airsoft or simply offset their sniper, shotgun, or support gunner loadout with a carbine style airsoft gun. It would also excel in indoor, CQB arenas like TacCity in Fullerton, CA over outdoor fields where you could be outclassed by more advanced, higher performing airsoft guns. 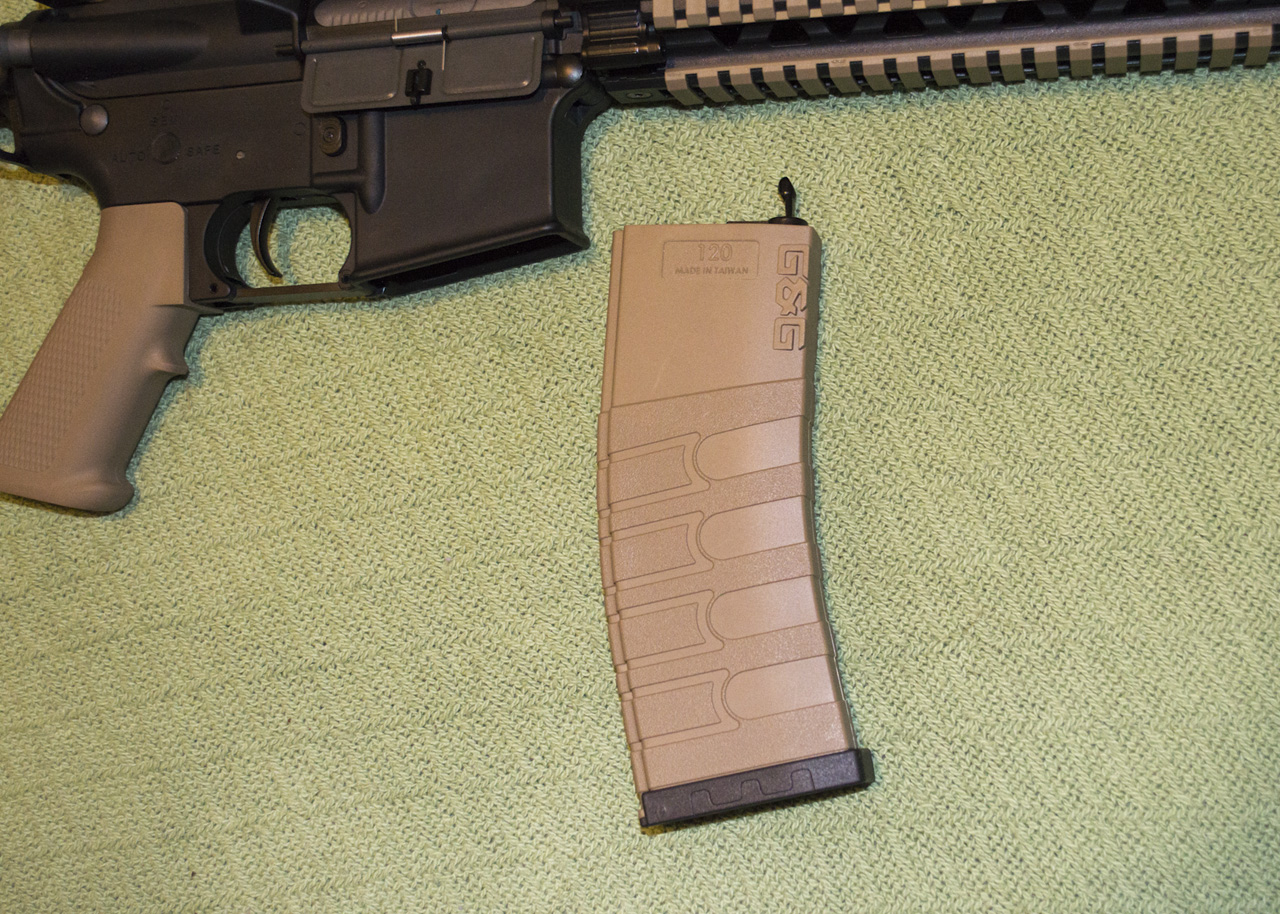 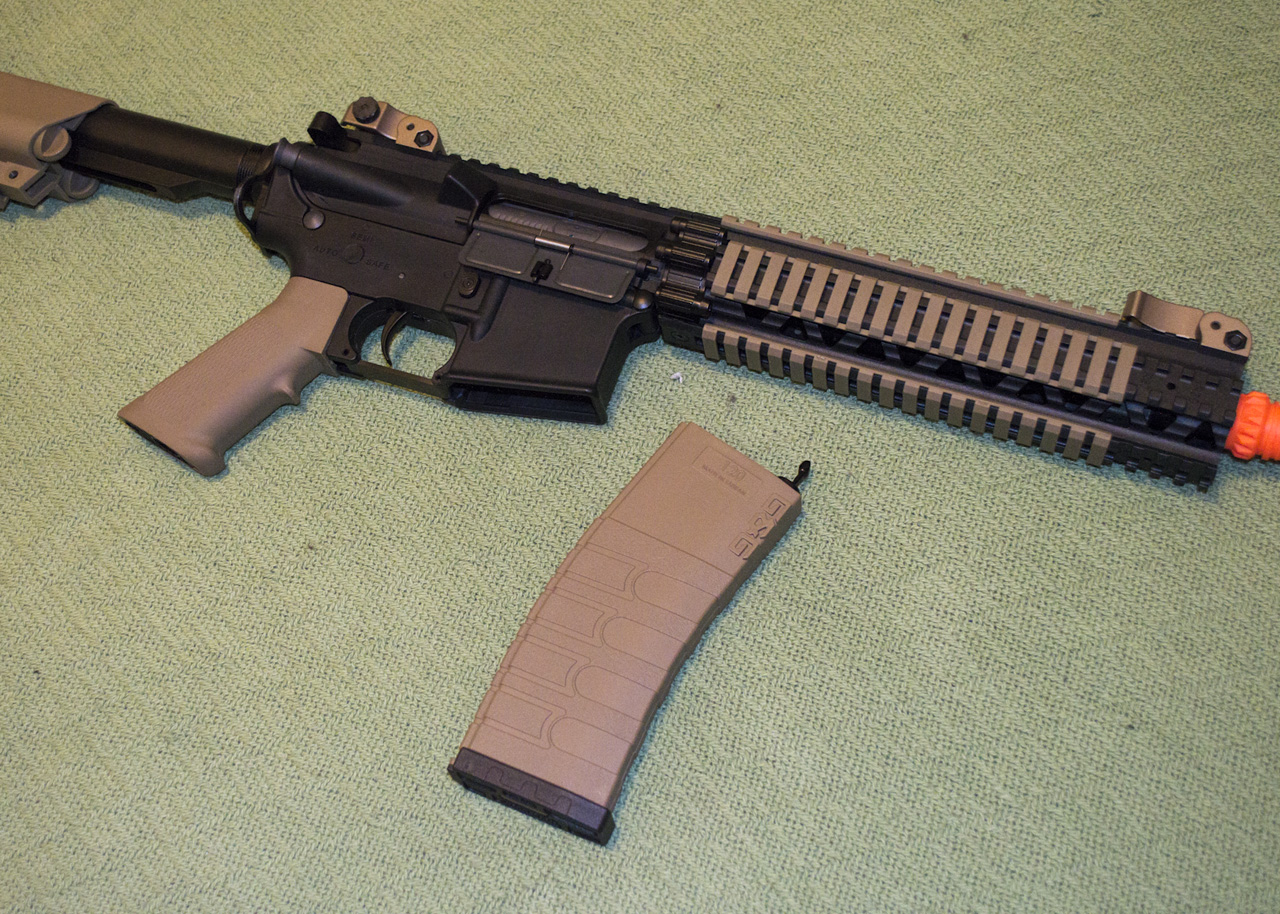 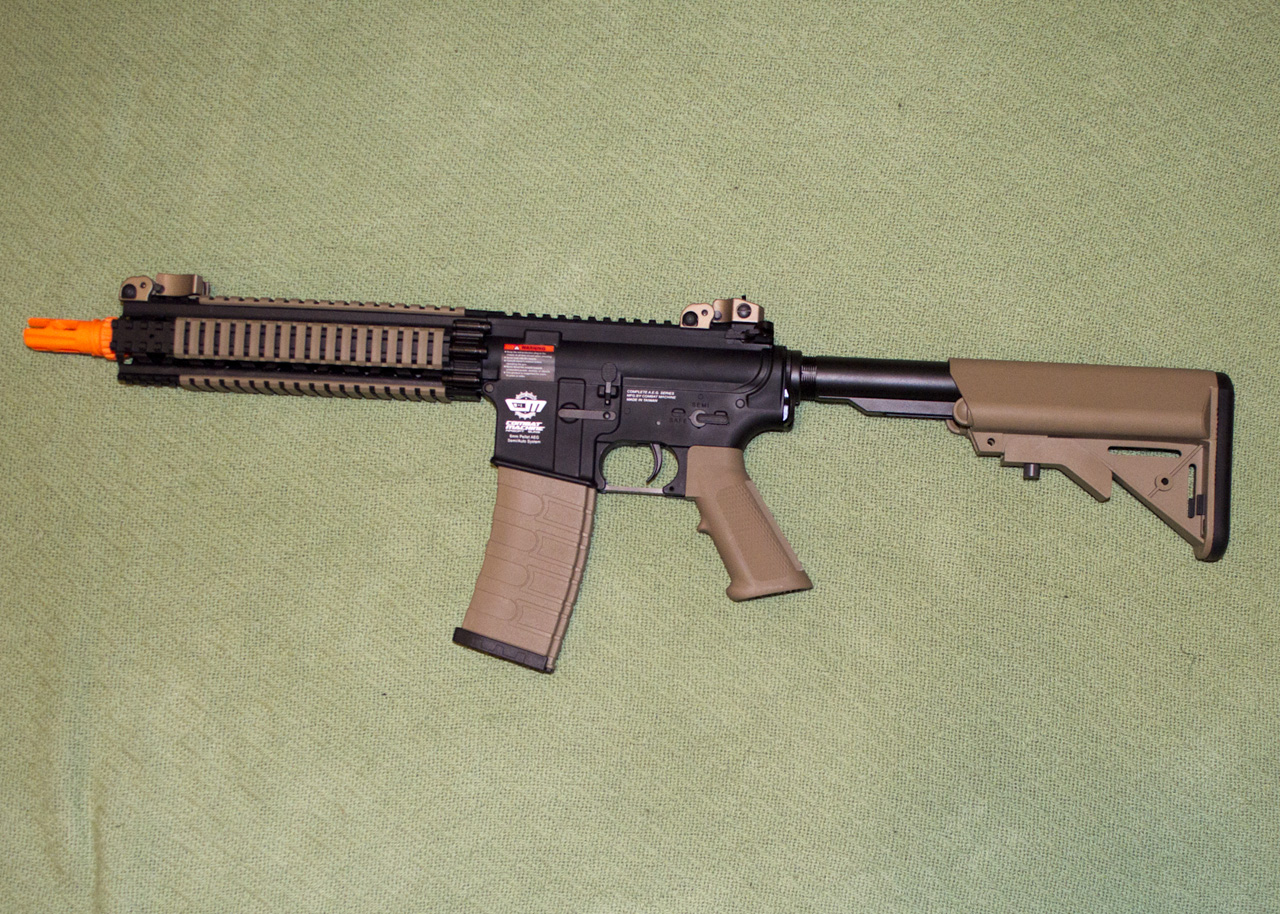 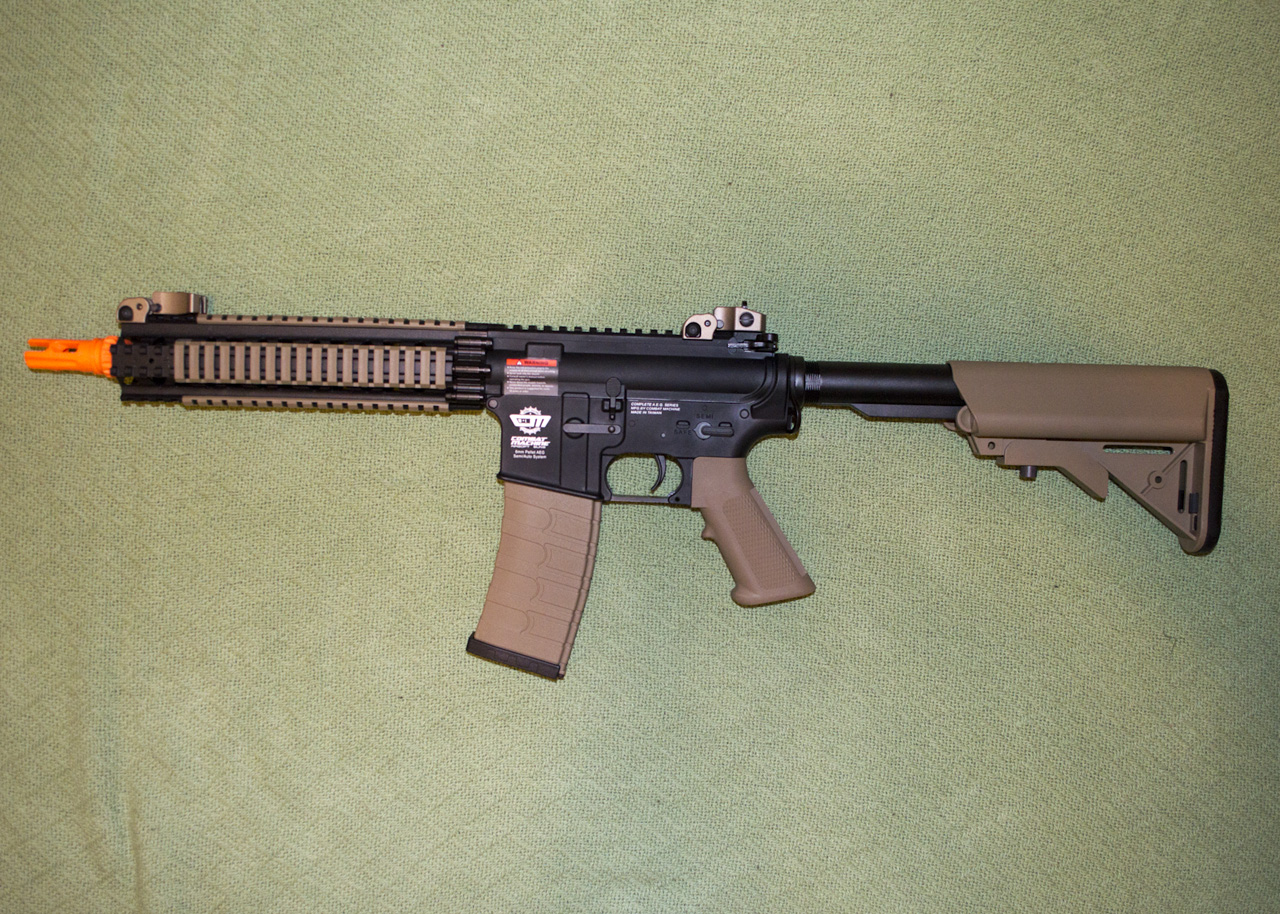 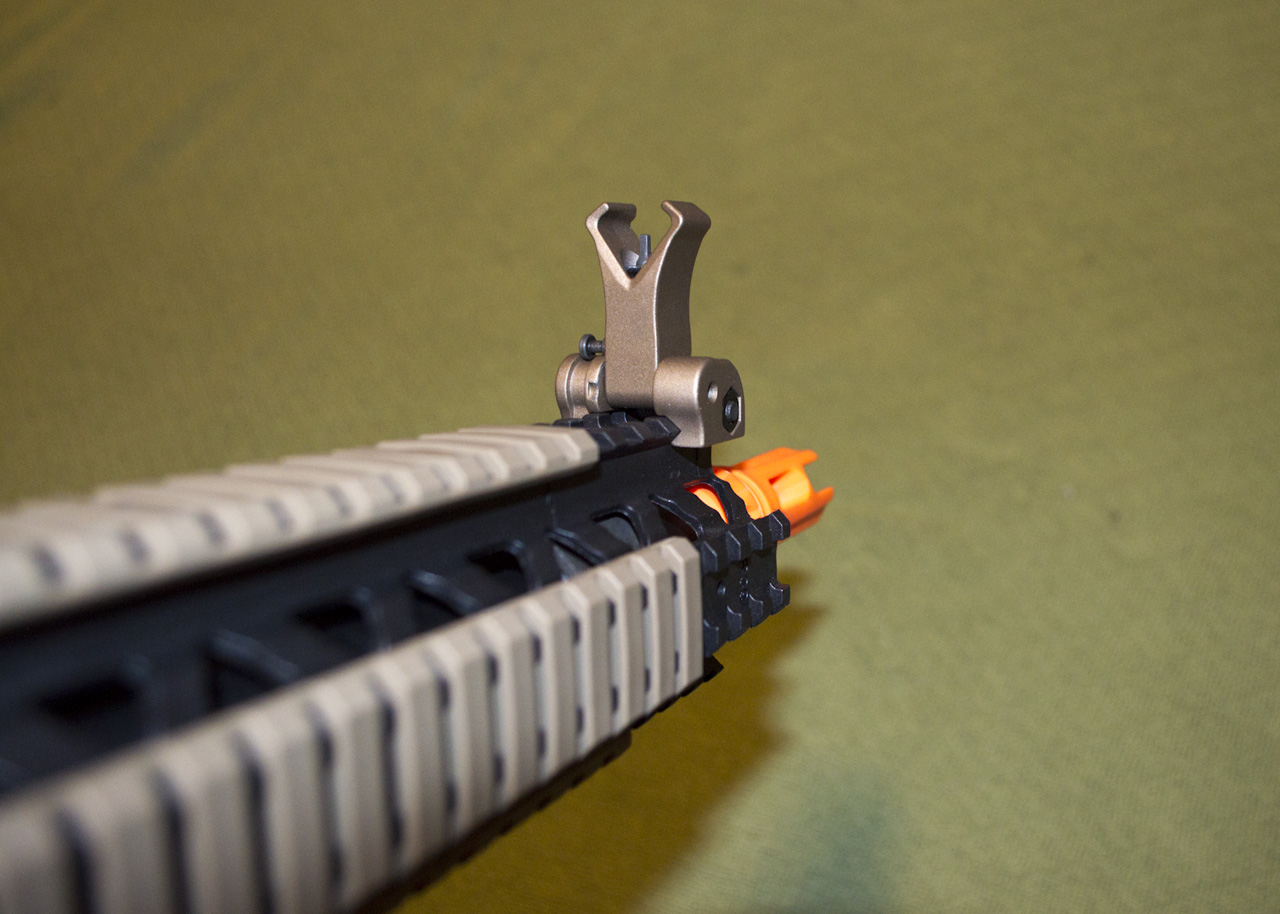 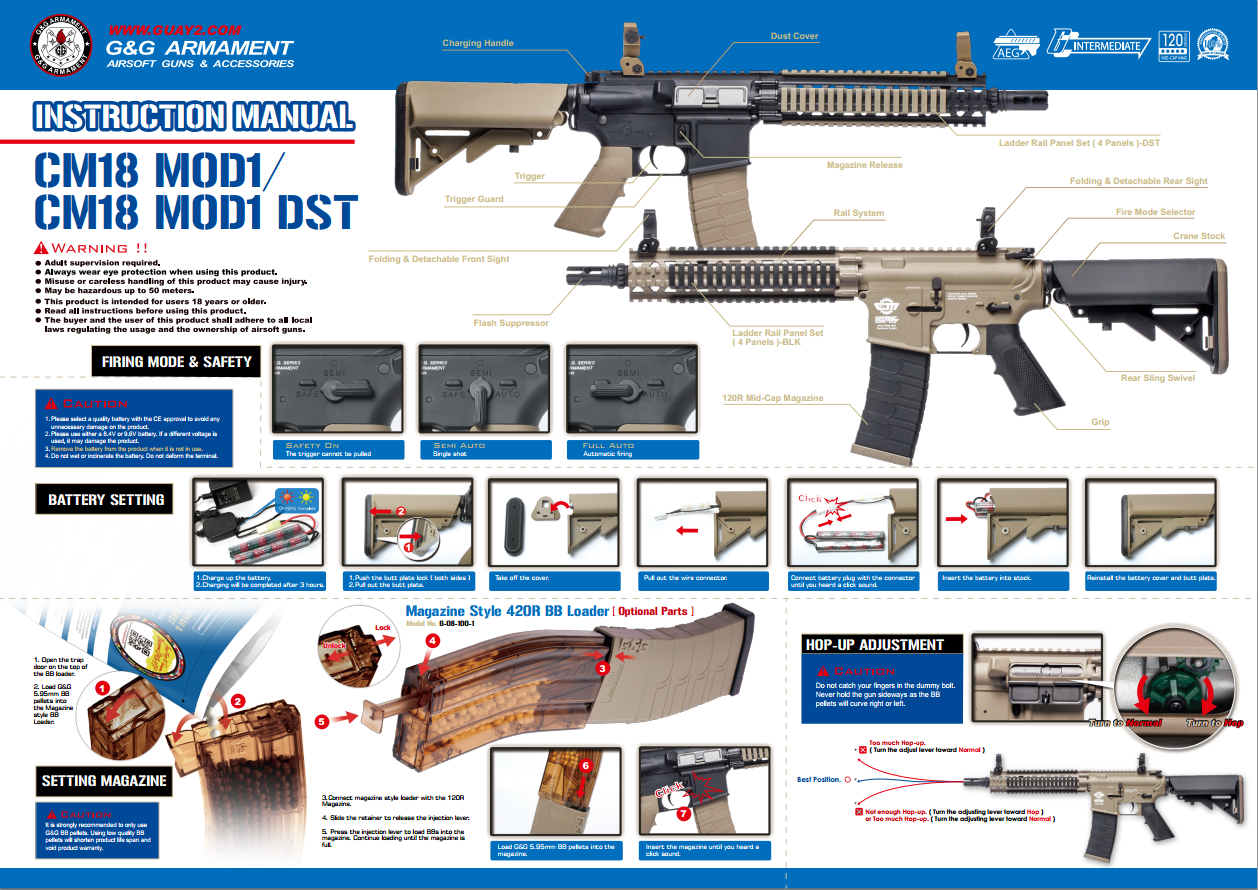 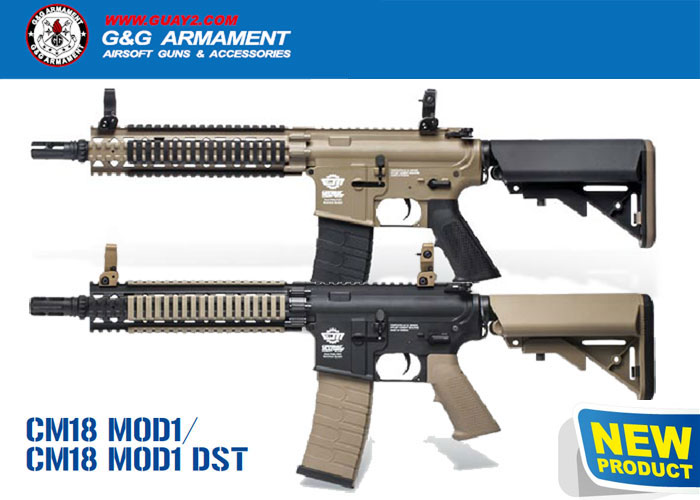