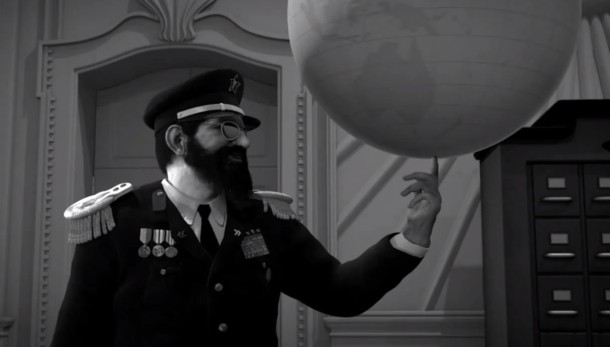 August 14, 2013, Ridgewood, NJ – Penultimo, the greatest communicator of all time, is pleased to announce that the votes have been counted and verified and we are proud to confirm that the glorious El Presidente will return for a fifth term in power on the island paradise of Tropico! Yes that’s right, Kalypso Media is delighted to announce that Tropico 5, the next installment of the highly anticipated and critically acclaimed Tropico city-builder series, is currently in development at Haemimont Studios and is slated for a 2014 release. Kalypso will release Tropico 5 on the Xbox 360® video game and entertainment system from Microsoft, Windows PC, Mac and Linux.

Fancy seeing how El Presidente spends his time when not planning his global domination? Check out the brand new Tropico 5 teaser trailer here:

Packed with a whole host of new gameplay features and all new artwork designed from scratch,Tropico 5 takes the series into a new and exciting direction – dynasties!

You, as El Presidente, will first take control of the infamous island of Tropico during early colonial times and then guide it through the centuries as the world changes and moves ever forward. You must tackle the changing needs of your people, as well as opposing governments and factions, and thus lay the foundations for your own dynasty. As you move through your years in office you can promote members of your extended family on the island to positions of power: such as ambassador, commanding general or even Supreme Ruler, to ensure your legacy thrives through the eras. As your influence and wealth grows, so do the threats to your burgeoning island superpower. Can you survive both World Wars, prosper through the Great Depression, rule as an iron-fisted dictator through the Cold War and advance your country to modern times and beyond? From the 19th to the 21st century, each era carries its own challenges and opportunities.

For more information on Tropico 5 please visit the Kalypso Media website at www.kalypsomedia.com or the official Tropico website at www.tropico5.com.