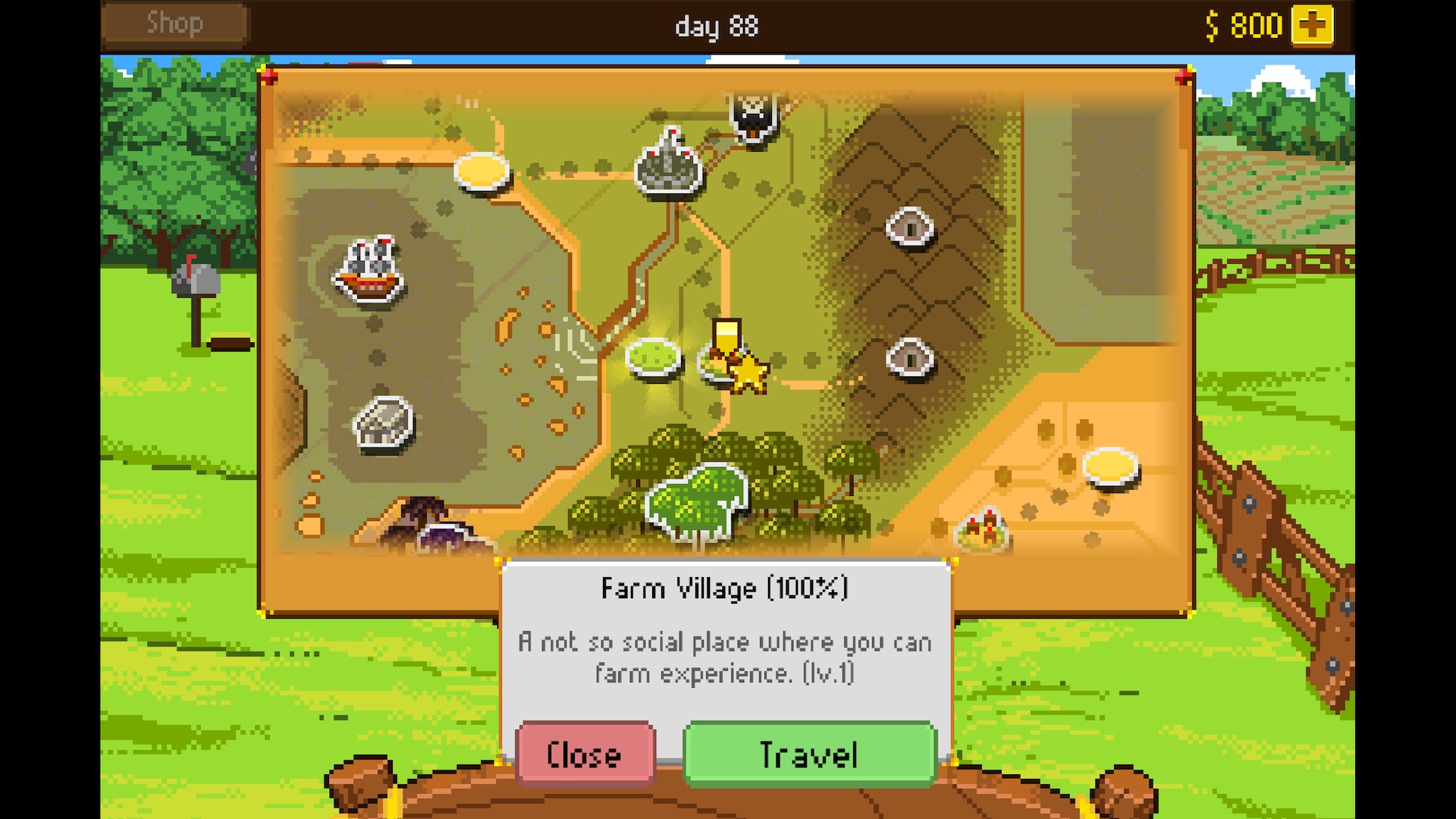 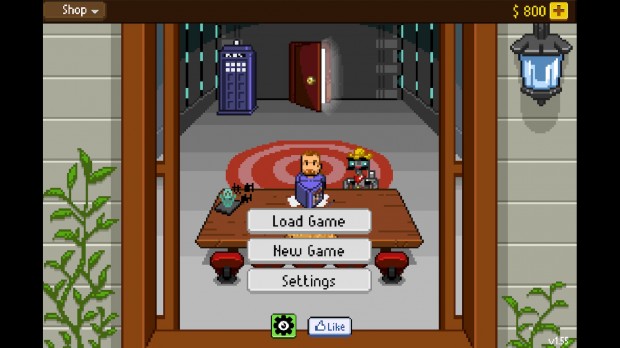 It is easy for people to forget that role-playing games owe their popularity to a bunch of guys playing in their basement with character sheets, books fulls of monsters, and a handful of funny-looking dice. Guys like me. You are welcome 😉 . We would spend hours and days and weeks in games, discussing character builds and running dungeons when, at that time, the only way to really “RP” was to stare at the person behind the blind and hope you rolled twenties.  Role playing came along early in the world of video gaming. In fact, some of the first games were just words on a screen like, “You are in a dark and dank room with exits to your north and up.  What do you do?”. Though this was great and fun, it also signaled a certain loss of camaraderie that the role-playing game was known for.  Gone were the cold pizzas, massive doses of caffeine, funny dice and, most importantly, the feeling of sitting around a table with like-minded geeks.  For these reasons alone, I was excited to get my hands on Knights of Pen And Paper +1 Edition and remember the old days of tabletop gaming with the feel of early console gaming.

Set out on a grand adventure in this turn-based, retro style, pixel-art RPG, inspired by the great titles of the 90′s. Take on the roles of in-game players taking on the roles of their characters in a traditional pen and paper RPG session in the ultimate meta roleplaying experience.

As both the playing characters AND the game master, players can choose which battles to fight. Put together a bunch of monsters to make for a challenging fight and your efforts will be equally rewarded! 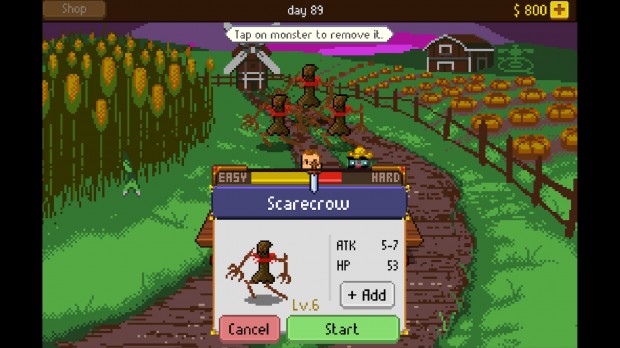 Choose from multiple classes, such as knights and mages, pick your characters to control those classes, like grandma or kid brother, and take on the loads of quests, monsters, items and equipment littered throughout Knights of Pen & Paper +1 Edition. Blacksmiths, enchanters, mining, gathering, hidden treasures and a whole lot more await, giving players a lot of room to personalize their gameplay experience.

Don’t wait any longer, the Pen & Paper world needs you!

The +1 Edition includes these all new features: 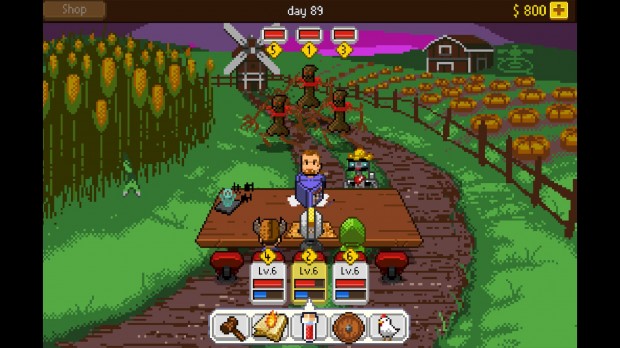 I can’t state enough just how much fun it is to play this game and get a taste of the old days of tabletop gaming again.  Every time one of the characters piped up with some comment, I thought back to some conversation I had with a buddy in some dimly lit room over my favorite bag of chips and soda, shooting out our noses as we crack each other up with some geek humor.  Of course, there were the times of serious role-playing when we were in the middle of a 48 hour-long campaign where we were just trying to keep from all dying, hoping someone had a couple resurrection scrolls to pull us through. Knights of Pen And Paper +1 Edition lets you get snacks and drinks for the “players” as well as decorate the room they are playing in.  The creators of Knights of Pen And Paper obviously spent plenty of time around such tables themselves, because they captured the moments beautifully while at the same time making them into fun gameplay moments.

Once you get past the great atmosphere, the gameplay is a fun throwback too – this time, to the early days of console gaming.  If you ever played Dragon Warrior on the NES or early Final Fantasy games, you know the type of gameplay I am talking about.  MIDI music with pixel-heavy monsters where you decide each turn how best to survive to the next and where best to put your points for your talents.  No giant trees of talents like MMORPGs we see now, just a handful of skills to use the best you can with the rest of your group.  Choosing your “players” also plays into this because, just like in real life, the better your group works together with their individual styles, the better the fights will go for them.  The cute gaming girl gets into the group cheaper, but the obsessed D&D girl helps the team better through knowing the play so well.  Sure, having an experienced GM might help you survive the battles better (+ to health), but the comic book store guy knows how much fun it is to level (+ to exp).  The game is a “game within a game” but you control all the elements to make it the best play experience possible. 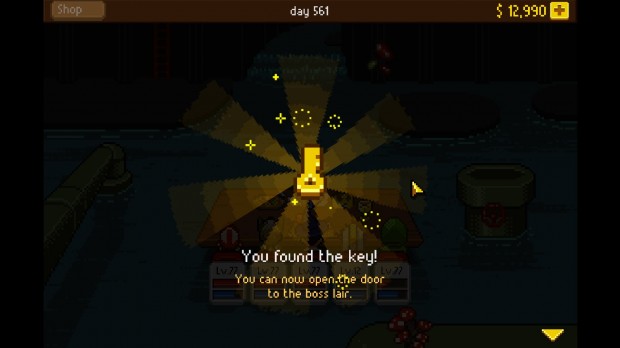