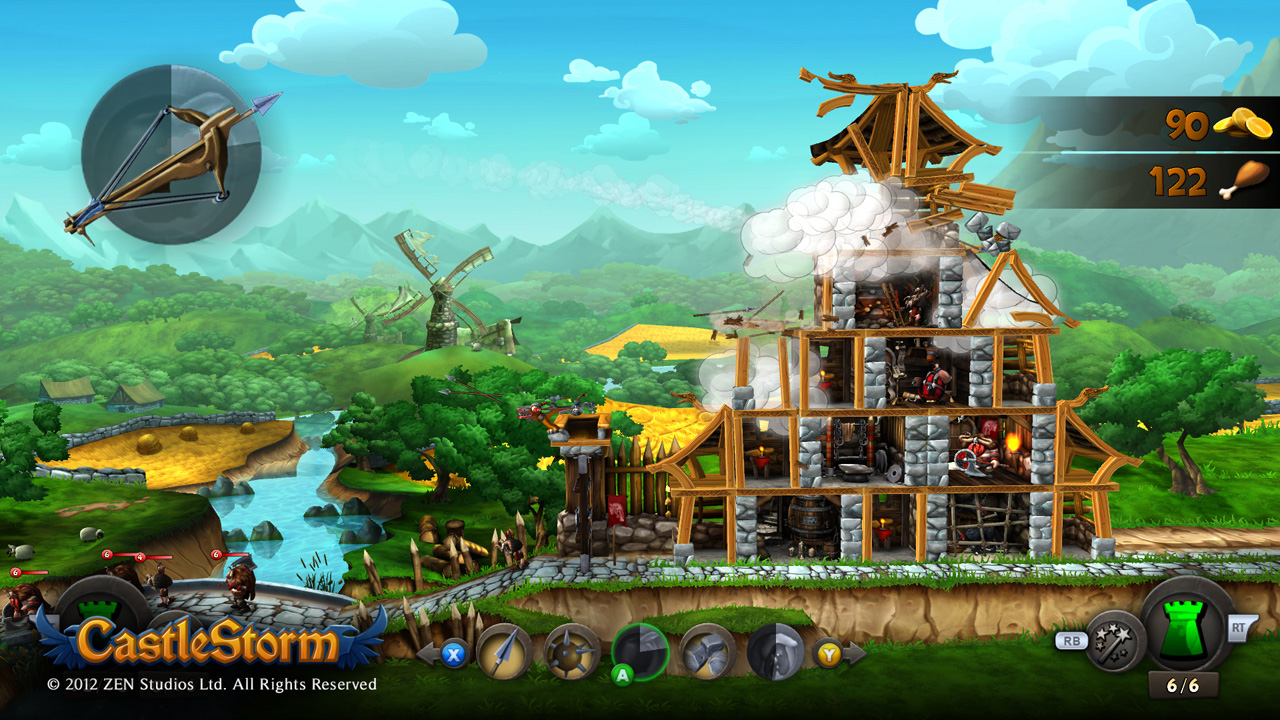 I have to hand it to Zen Studios: When they do something, they take the time to do it right.  We fell in love with the physics modelling in their Zen Pinball so much, that we own virtual tables on four platforms! Different tables on each one, I might add. That is how much we respect their pinball.  So, when I got to play CastleStorm, I thought I would have the chance to experience a very solid tower defense game with terrific physics.  What I didn’t expect was that Zen Studios decided to take tower defense and mix it together with elements from one of the all time favorite mobile games, Angry Birds. It’s a mashup that works so well, it might be hard to go back to a regular tower defense game! 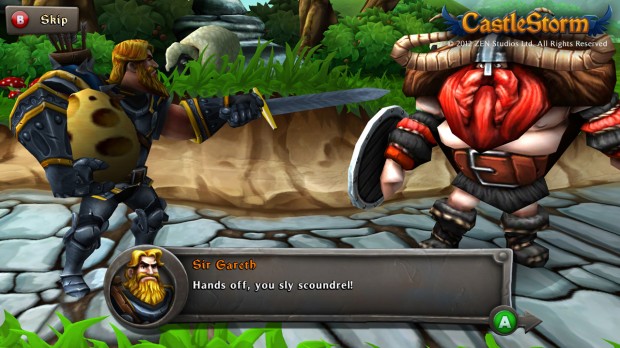 The clouds bring rumors of war…
It’s Knights vs. Vikings in CastleStorm, where medieval warfare meets 2D physics-based destruction!  Controlling the battle in real time, players will harness the power of medieval artillery, manage a fearsome ground attack, and cast powerful spells!  CastleStorm features a story-driven solo campaign, a custom castle editor, online multiplayer, co-op modes, and more.  Building castles and knocking them down has never been so much fun!  CastleStorm is a physics based tower destruction game, combining elements of real time strategy, resource management, and a beautiful blend of challenging gameplay scenarios.

Build your own castle! CastleStorm features a tower construction editor allowing players to construct their own custom castles that will be used in battle. Castles must be constructed wisely, as choices determine which types of troops and resources will be available during battle!

Twelve incredibly beautiful environments and a comical story, in stunning stereoscopic 3D. Sir Gareth leads his troops into battle against the raging Vikings to recover the stolen gem and bring peace to the realm!

Multiple paths to victory – you can choose how to defeat your enemy. Capture the flag, destroy their castle, or complete another predetermined level objective in order to claim victory. Each level features multiple objectives, each with their own rewards!

An arsenal that would make any medieval warrior proud! Harness the power of medieval ballista weaponry, and launch an assortment of explosive weapons including Morningstars, Apple Grenades, Homing Eagles, and even flying sheep to defeat an onslaught of enemies trying to capture your flag and destroy your castle. Deploy a fearsome ground attack of swordsmen, knights, and donkey riders in order to protect your castle gates, and if all else fails, call upon powerful spells to help keep the enemy at bay.

You’ve won the battle, now power up so you can win the war! As you power up in CastleStorm, new weapons and troop classes become available for use in battle. 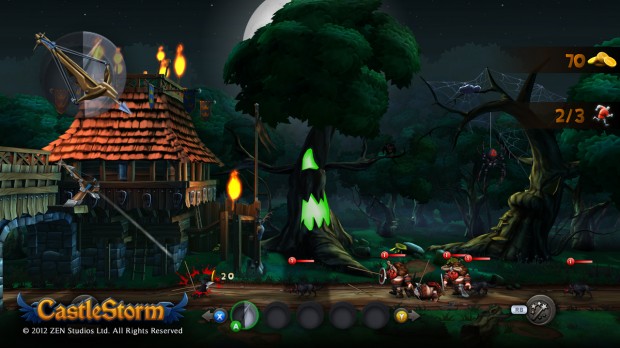 CastleStorm is a 2D side-scrolling tower defense/offense game where players send units out to attach each others castles as well as any potential opposing units along the way.  At this point, it sounds like pretty standard tower defense fare, with leveling the units and trying to pick the right combination to bridge the gap.  Then you have your main character: Your hero, who is supposed to be your avatar on the field that you can level and pick spells for, actually joins your forces in battle.  This is a different enough touch to have some bonus levels and gameplay options dedicated to it and can strategically be a huge game changer if you level him right and send him out to tear a path through the enemy’s gate so your troops can capture their flag.

Where the game gets really interesting though is it has this Angry Birds aspect to it.  Each side has castles that are built with see-through side walls and rooms dedicated to each troop type.  Each side also has ballistas so they can fire at each other’s castle walls AND enemy troops crossing the field. These projectiles can knock down enemy castle walls with stones that split in midair or with apples that explode on command or launch sheep that fart poisonous gas at the troops passing across the field!  The result is playing an Angry Birds style game where you are attacking units as well as buildings, playing tower defense on what units you send out and playing hack and slash when you get down on the field yourself.  To top it all off, your hero can cast spells from the safety of his castle that may provide defense for his units and building or offense against enemy units. 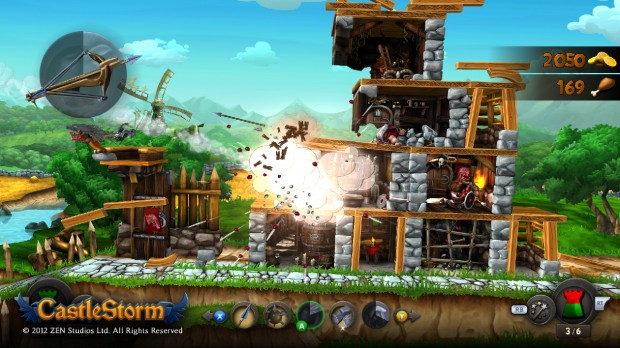 The result is a strategy game with multiple ways to win and multiple ways to lose.  Just about every level gives you a bonus objective, like wining the match in under four minutes or not take any damage to a particular room of your castle.  This is important, because if a room in your castle gets destroyed that represents a particular unit or unit bonus, you lose it for the round! You wind up having to design your own castle as part of the game so you become very aware of what units or bonuses you will lose first if you don’t build with care and the enemy starts raining destruction down on your stronghold.

The graphics are playful and comical as is the storyline and, as a result, the game is deceptively sophisticated.  It pokes fun at its similarities to Angry Birds as well as making pop culture references to IPs such as Game of Thrones (one of these really cracked me up) so that you can laugh and have fun with the story and the gameplay.  Be advised, if you take things too lightly, your castle will undoubtedly fall. Stay sharp! 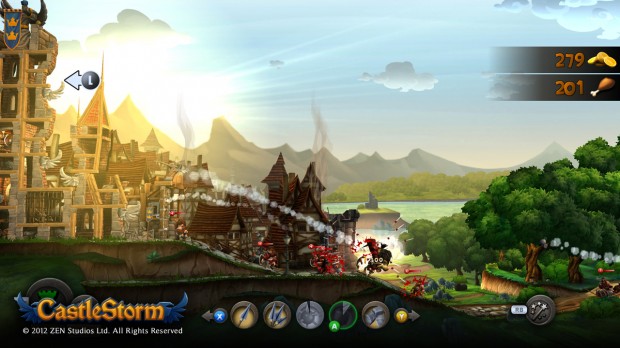 CastleStorm is a great mix of game styles that Zen Studios pulls off beautifully.  I replayed many levels over and over as I went through just so that I could try a different strategy out.  On one attempt, I might concentrate on taking down their castle then I would play it again and see if I could beat it faster with a handful of troops and my hero storming their gates.  I never actually cared that much for the Angry Birds games and now I think I know why – the enemy wasn’t fighting back!

Note: At the time of this review the game had not yet been released so online multiplayer was not testable enough for an opinion.