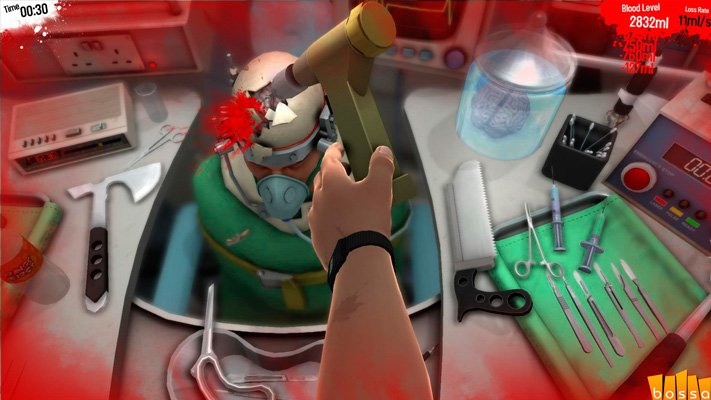 So there are people out there that simply won’t “get” this game whatsoever.  These are often the same people who won’t spend $20 on the crane machine trying to win a stuffed animal nobody wants.  They wouldn’t have stuck with Super Star Wars on the Super Nintendo or collected tickets in an arcade all night that gets you a pair of glow-in-the-dark fangs and a small spinning top.  Maybe a whistle too, but that doesn’t matter…  The whole point is that sometimes doing something difficult simply to get it done can be fun just to prove you can do it.  This is not for everyone, but those who do enjoy such things will enjoy Surgeon Simulator 2013. 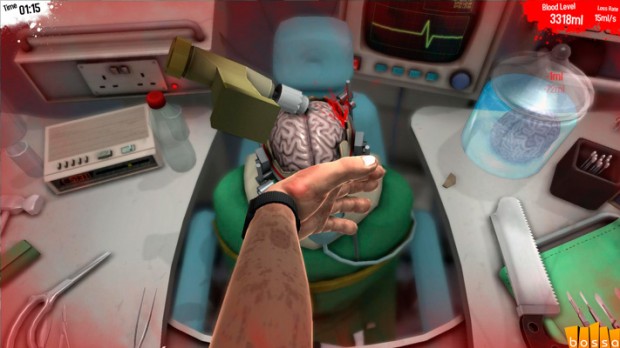 Surgeon Simulator 2013 is a darkly humorous over-the-top operation sim game where players become Nigel Burke, a would be surgeon taking life into his own shaky hands, performing life-saving surgical maneuvers on passive patients.  The original prototype – developed in just 48 hours at the 2013 Global Game Jam in January – challenged players to complete a heart transplant, armed only with an arsenal of clumsy and inappropriate tools and a hand that was diabolical to control, using a combination of keyboard and mouse actions.

The full Steam version comes with additional features, operations and environments. From carrying out terrifying transplants in theatre – to surgical procedures in the back of an ambulance – Surgeon Simulator 2013 now takes operating to the next level.

Set in 1988 everything is dated from the equipment and desk clock radios to the show the lead character is obsessed with and the music choices.  The only thing missing is an ashtray in the operating room. 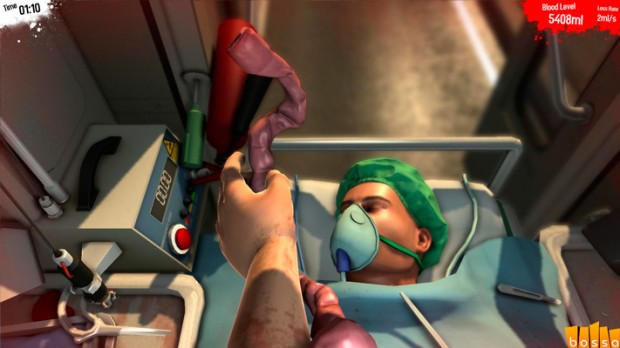 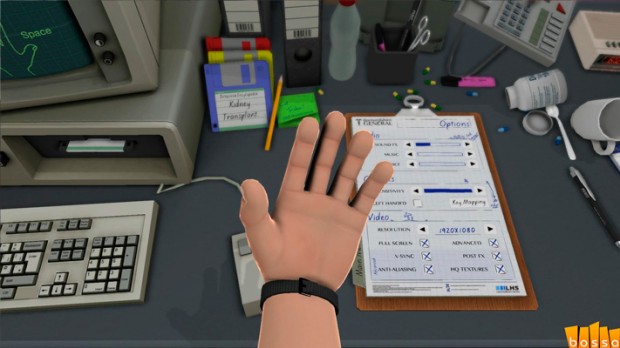 So try to imagine you have one arm with no elbow and can’t work your fingers in a complex manner. You can only open and close them with the barest of ability.  If you want to pick up a scalpel, you lower your hand, make a fist and however you hand picks up the blade is how you are going to hold it – no matter what.  You then have to twist or bend your wrist and lift and lower your arm in a plane fashion.  It is almost like picking tweezers up with a crane machine then using this hold to play the game Operation with.  In case that is too hard to visualize, the controls are insanely difficult to work with – sloppy, messy, and completely made that way on purpose for the sake fun and misguided medical science.   There are three missions set up in two different environments along with some hidden levels and yet the gameplay is still hours upon hours in length… From having to restart missions over and over!

If the controls aren’t enough proof of the fact that Surgeon Simulator 2013 is supposed to be silly fun, you have  your clock radio in the operating room with you so you can listen to your groovy tunes as you slice up organs and toss them all over the place when you can grab them.  One of the best tools at your disposal is a clawed hammer but don’t forget there is also a pencil and empty orange juice bottle at your disposal too.  Don’t worry either about putting the organs back in, they only care that you get the organ you are supposed to replace makes it back in, feel free to leave that liver, lungs and stomach sitting on the floor. The patient doesn’t need those, right? 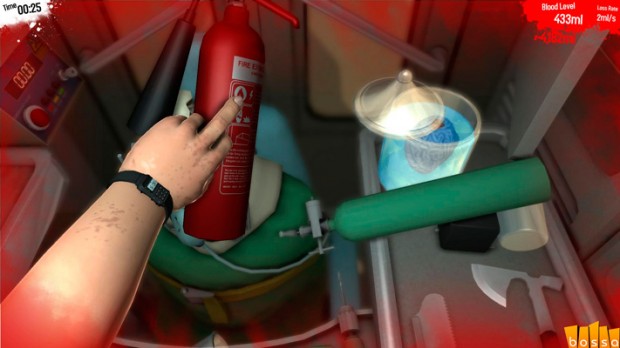 This game is so definitely not for everyone, only sadists and masochists, and should not be taken at all seriously.  If you are one of those people who loved quarter-munching claw machines and over the top, gory humor then this is the game for you. You will certainly lose hours of time playing Surgeon Simulator 2013 instead of quarters in an arcade for a stuffed animal no one wanted in the first place.