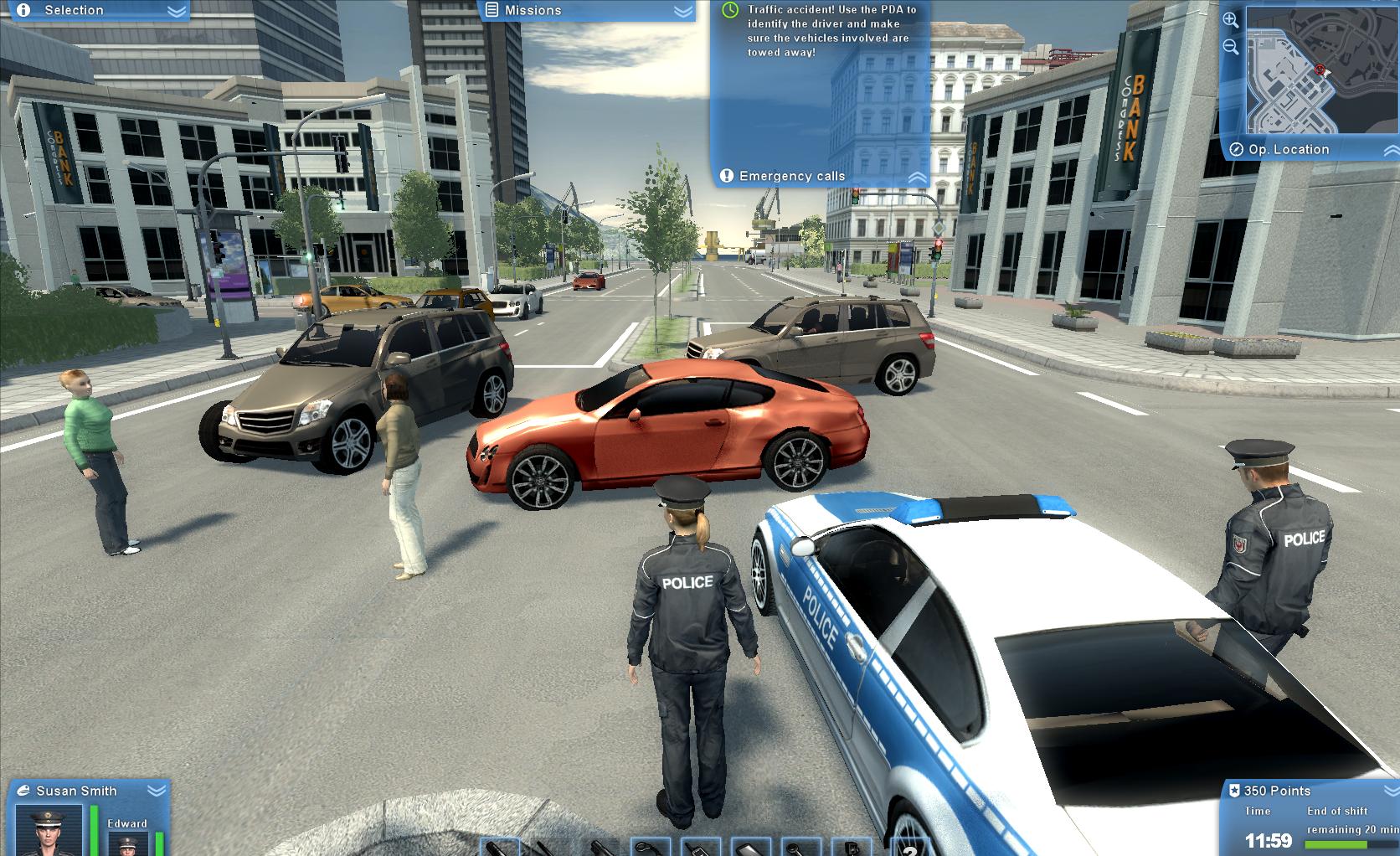 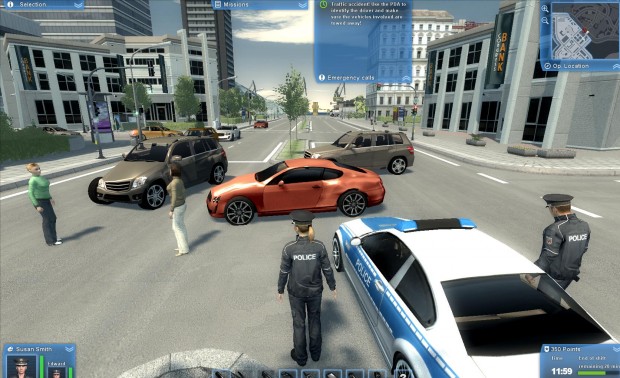 I have some really fond memories of playing Sierra’s Police Quest series – even more with their SWAT series (Bring those back, people!). For reasons I cannot explain, I have always had an interest in law enforcement and the day-to-day activities that go along with life on the blue side of the law. Now, Excalibur Publishing’s Police Force 2 puts players in control of two British Constables. Not being a traditional US-based law enforcement game, for that reason alone, I had to checkout their US version of the game and see how they localized it.

When beginning Police Force 2, you get to name the two officers under your control – a male and female. Each of these officers has certain specialties. The female is equipped with OC spray and can setup radar checkpoints as well as flag drivers to exit their vehicles. The male officer gets a baton and sidearm. Switching between the two in-game is as easy as hitting the TAB key. If you are completely new to Police Force, you can have the game give you a first tutorial shift. You will learn a lot of the basics in this tutorial shift, but, there are many things not touched on, such as setting up radar checkpoints. These things must be learned “on the street”. You start each shift with a digital “briefing” message window telling you what time of day it is, if you are uniformed or plain clothes, etc. Each shift has an overall goal to achieve. These goals can range from apprehending a known felon to ped checking X number of citizens to even seeing if restaurant owners have a valid license to run their business. After reading this, you hit the start button and begin your shift. My big grip in the briefing system is that it should have been done in-game. I wanted to see a virtual squad room with the watch commander giving officers notes, etc. The rub in this is, the briefing message window is actually a mask for loading the level… So, I let that slide. However, I can’t imagine that there wasn’t a way to spruce briefing up a little bit – even while loading the level in the background. 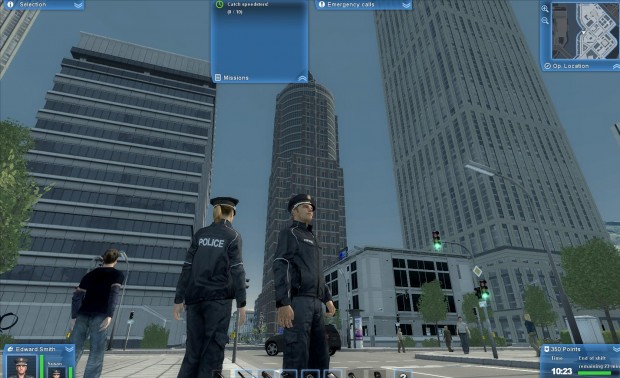 To begin each shift, player officers start in the police station. In the station, you will find the forensics labs, where you will be tasked with taking evidence from time to time, but that’s about it. I was kind of hoping for a more interactive station, but I digress. Maybe a locker room where you can select your loadout from various law enforcement gear (sponsorship opportunities, guys). To the left, when exiting the station, is the department’s parking lot / motor pool where you will find three types of marked police vehicles and one unmarked car for your usage. There doesn’t seem to be any real difference between them aside from their appearance.

Visually, Police Force 2 isn’t going to win any awards. That being said, the game’s visuals are perfectly fine for its sim-attitude and I grew to like the bustling city streets and alleyways  The biggest issue with the game’s visual style  is its character animations. When handcuffing a suspect, there is no animation of a struggle or putting them into an arm lock to apply the cuffs. Instead, suspects just stop what they are doing and assume a hands behind their back posture, with cuffs appearing on them out of nowhere.

The game audio is average, although I wish more voice work had been done to flesh out interviews and ped checks a bit more. When interviewing people currently, you are treated with a message window telling you how they responded. It is rather thrilling when an emergency call comes in and you throw on your lights and, ahem, British siren to roll CODE-3. 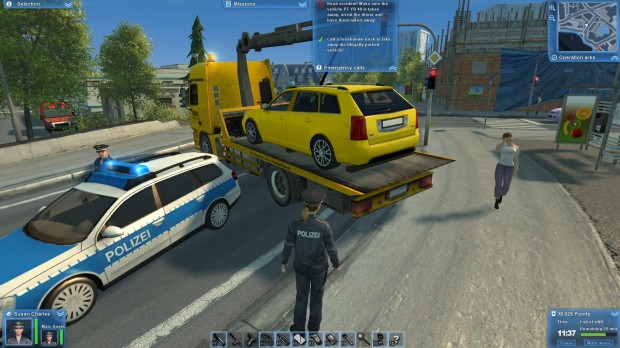 In terms of gameplay, Police Force 2’s fun comes from responding to the previously-mentioned emergency calls that come up when out on patrol. These calls range from traffic accidents to burglaries and several other types. Each type seems to have a few variations in theme, which keeps things interesting. There are also random encounters that, if you are sharp-eyed enough, you can take advantage of. For instance, you can spot pedestrians and under the influence drivers by how they walk and, respectively, drive. Getting out and contacting the pedestrian may result in them taking off on you, so stay sharp. Another cool gameplay device is that you can read the license plate of vehicles in-sight by hovering your mouse cursor on them. When you see a blank plate, indicative of expired or no tags, you can attempt a traffic stop. My biggest gripe in these cases is that I have NEVER seen a vehicle pull over when that occurs. They always try to rabbit on your and a pursuit ensues, with you having to somehow ram them and stop their vehicle. I would like to see the option to make a felony stop with driver’s at least having the sense to pull over after a brief chase.

Unfortunately, the game still does have some bugs to work out, the biggest I found being a pathing issue which freezes the game. If you right-click on your patrol vehicle and end up running into an object like a parked car or tow truck, the game just gets stuck and your officers will freeze in their tracks, the game world still going on around them. There are also some other, minor bugs but nothing else I found that broke them game. The reason why the freezing issue is so major is that you only get promotions or commendations by completing a full shift – which can take about 30 minutes of real time. If you don’t complete it, you don’t get anything!

Overall, Police Force 2 gets a fun, yet sometimes frustrating, 3 out of 5 stars – which I will gladly raise to a 4 out of 5 once some of the bugs are worked out of the game. It is an addictive sim experience that will soon have you jetting around the city looking for lawbreakers and “rolling code”.