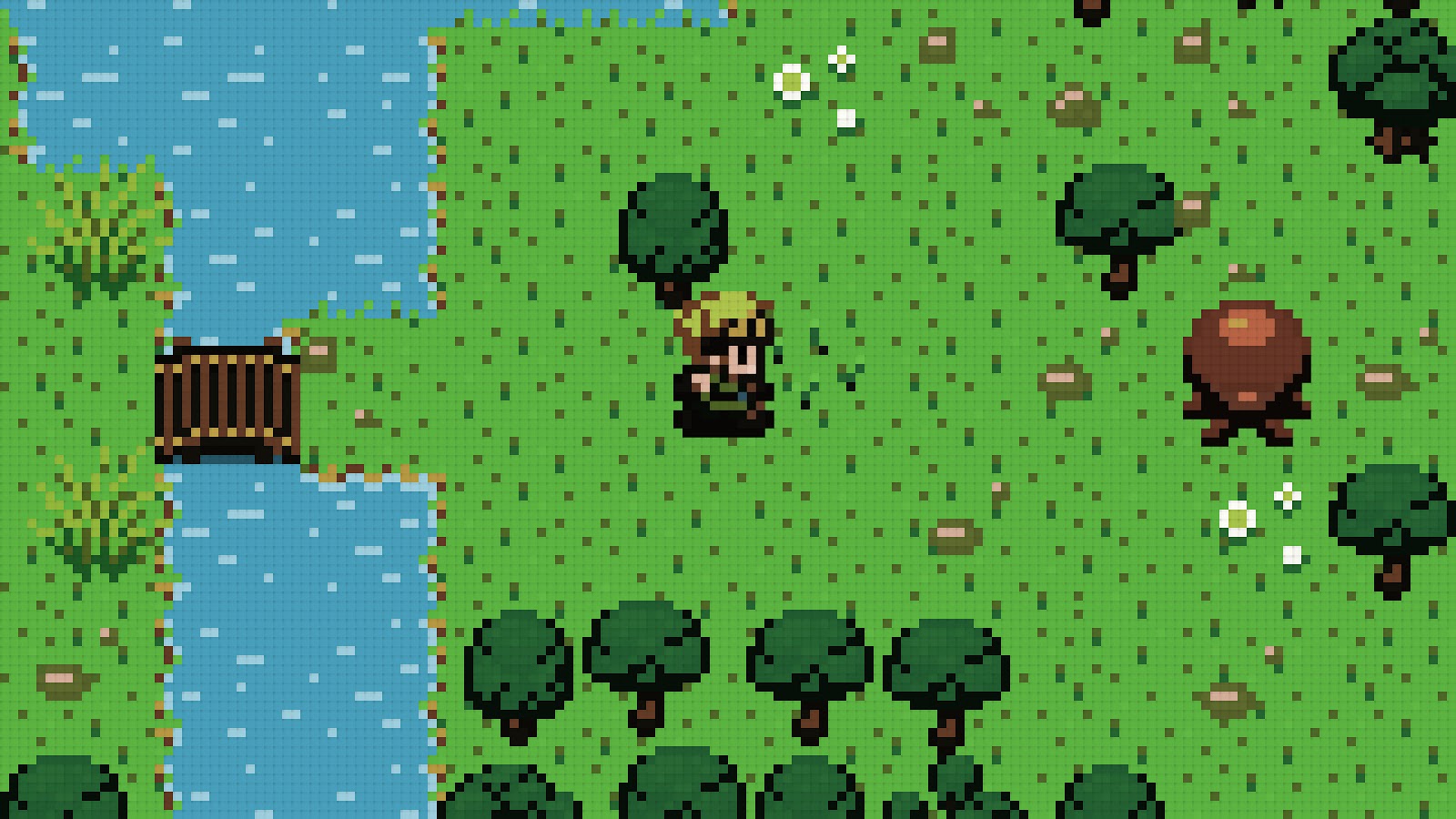 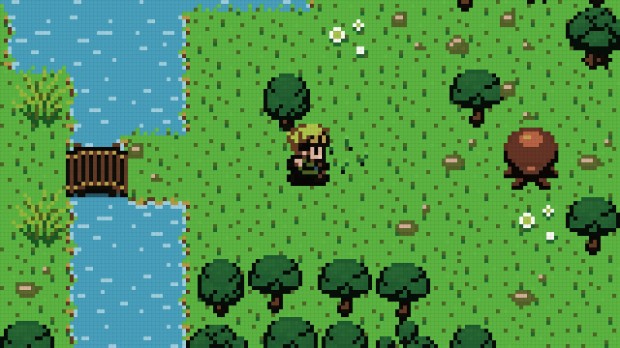 The role playing game has had a long and storied history in the world of video games.  Games like Ultima, Hydlide, and Final Fantasy has paved the way for today’s games, such as Mass Effect and Skyrim.  The role playing game has gone through a massive evolution from the earlier days, in both game play and in technical aspects, such as graphics and sound.  With Evoland, Shiro Games hopes to bring this evolution of the rpg to life with their own story.  The concept of Evoland is very simple, you set out to save the world while finding upgrades to the game itself.  As you play Evoland, you will find items such as 3D backgrounds, or random encounters, or even sound that will evolve your experience with the game.  Evoland parodies many of the classic rpgs, such as the aforementioned Final Fantasy and the Legend of Zelda, but struggles to find an identity all it’s own.

You begin the game playing as Clink, a young boy who sets out into the world in search of adventure.  As you progress through the beginning of the game, you will eventually run into a young girl named Kaeris, who is setting out to find the two halves of an amulet that she needs to save her town from destruction.  Joining forces with Kaeris, you hunt down the two halves of the amulet in order to gain entrance into the Black Citadel to face the ultimate evil that threatens to destroy the world.   Evoland is fairly short, clocking in at around three hours of gameplay, but that is plenty of time to tell this generic story.

From the beginning, Evoland sets out to parody the great games of old, even by mimicking the names of Link and Aeris from Legend of Zelda and Final Fantasy VII respectively.  Even the story is a generic retread of many of the old rp games from yesteryear, without really having a soul of it’s own.  This isn’t a huge negative for me, because I feel for this game it actually worked to serve its purpose, but it does so without being stellar or memorable.  In fact, what the story of Evoland really does is remind me of the better games that Evoland parodies from my youth.

Evoland’s gameplay is what saves the overall experience.  You begin your adventure in a soundless, colorless, 2D world where you can only go right.  Going right leads you to a chest, in which you find the left button.  Finding this button then opens up more of the game play by allowing you now to go left to collect another upgrade, which opens up the rest of the world.  As you play through Evoland, the game play will evolve, hence the name.  You will encounter upgrades such as color, 16-bit graphics, sound, random encounters, and changes to your heads up display.  I found this gameplay mechanic to be very entertaining and it is the main draw to Evoland.

Evoland will but a ton of random fights in your way, just like the older versions of Final Fantasy.  Sometimes, it will feel like you can’t go three feet without having to battle a random creature and you move through the overland map.  At first, I was enjoying this feature because of how much it reminded me of the older rpgs I played, but soon grew to hate it and realized why developers moved away from this game play mechanic.  Not everything that occurred in old, classic role playing games where fantastic nor do they hold up well to today’s standards.  Fights are extremely straightforward in most combat situations.  When you are fighting in the overland, the combat system becomes turn-based, a la Final Fantasy, with almost no challenge whatsoever   You just select attack until all your enemies are dead, while you have Aeris, I mean Kaeris, just spam heals without fear of running out of mana. 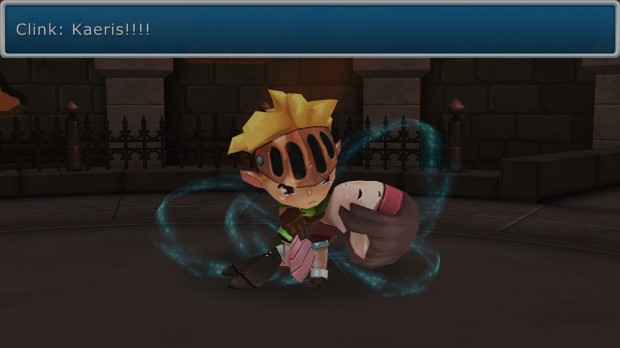 When Clink enters into a dungeon, the game play changes yet again to a more The Legend of Zelda style, with one exception which mimics the Diablo series of combat.  Puzzles in these dungeons are simple to solve, requiring very little thought.  Combat takes a much more action rpg style, where you must swing your sword to defeat enemies and pick up gold and health along the way.  Death is a little more certain in these dungeons, but mostly due to instant death traps, like falling into lava pits.  The boss fights in these dungeons, again, adds a little more depth and challenge, but once you discover the pattern to the boss the fight is over.

Leveling up will only increase one of your stats per level in Evoland, and you do not have a choice in which one is picked.  Equipment is forced upon you, and you have a very rudimentary inventory screen.  During the Diablo dungeon, you do pick up much more equipment and a more robust inventory screen, but this is used only to give you the feeling of playing a Diablo game, and not to actually give you any type of bonuses.  The items are predetermined and do not give you the bonuses they say they do.  While reading the item descriptions will give you a good chuckle, it doesn’t really add anything to the game play of Evoland, except to remind you how awesome a game Diablo really was.

The sole purpose of the aesthetics of Evoland is to remind you of games gone by.  The game is modeled after the graphics and looks of such games like the Legend of Zelda and Final Fantasy VII, that you will feel like you are playing those games, almost.  There is always something just a little off about Evoland, like looking into a parallel universe where you recognize many things but they just aren’t as good as you remember.  The graphics of Evoland starts off as a copy of the 8-bit generation and will continue to evolve through the game until you reach high definition textures with ambient lighting.  Even at it’s most evolved, Evoland won’t win any awards for looking pretty, but the graphics here are designed to fit the overall idea of Evoland, and works quite well.

The sound works in exactly the same way as the graphics.  You begin the game with, literally, no sound at all.  Then as you move through the game, you will discover sound and music that will evolve in quality, but never any voice acting.  So I guess evolution does have a limit for the developers over at Shiro Games.

When I read back through this review, I realize that it sounds much harsher than I think I intended it to be.  Evoland is a parody of older, better games but it is enjoyable for what it does give us – the evolution of RPG gaming from beginning to end.  Throughout the game, I was reminded of the “good old days” of playing the The Legend of Zelda, Final Fantasy VII and the first Diablo games, and this made Evoland’s faults stand out that much more.  Parody is a tough gig – you have to make the connections to the story you are parodying while maintaining your own soul and identity.  That is why Mel Brooks’ old movies are the best example of the concept. Brooks was the master of making these connections but also in creating his own original ideas and jokes to make his movies into classics.  Evoland is a good attempt, but ultimately ends up being mediocre because of the lack of its own soul that Shiro Games just could not pull off through their parodying the greats of the RPG genre.  Still, for $9.99 on Steam, it is a good look for anyone that is fond of the old days of gaming.