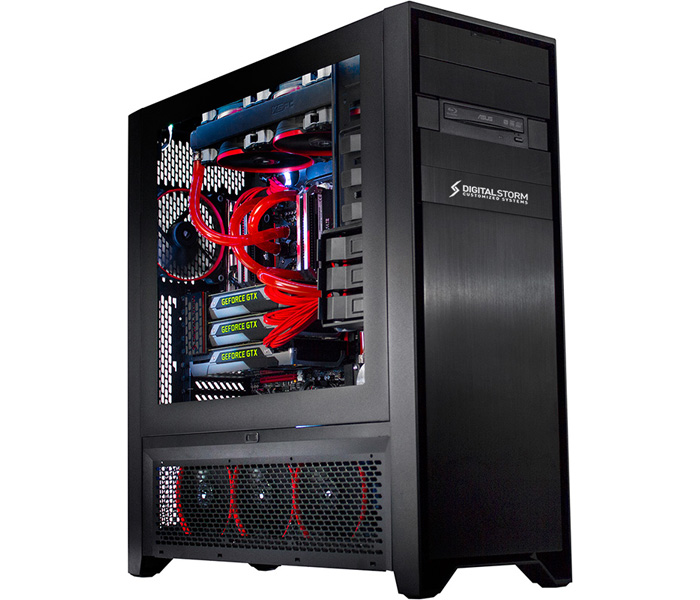 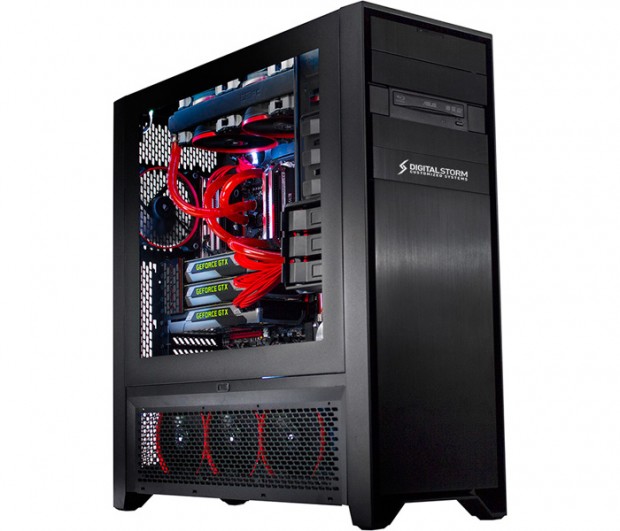 FREMONT, Calif. – (March 19, 2013) – Enthusiasts looking to quench their thirst for a benchmark crushing components and bone chilling liquid cooling need look no further than the Digital Storm Hailstorm II. With space for up to four radiators (ranging from 140mm to 480mm sizes) and a quadruple GPU and dual CPU configuration, enthusiasts can achieve the ultimate level of performance and customization with the Hailstorm II.

The Hailstorm II pairs an advanced liquid cooling system with a blustery current of cold air driven by three front intake fans and a large rear exhaust fan. With the ability to include up to 15 fans total, the Hailstorm II encompasses one of the most powerful airflow designs available, providing prolonged stability and ensuring every component operates at peak performance with zero heat related bottlenecks.

“When we (Digital Storm) set out to redesign Hailstorm we knew it would be a challenging to improve on a system capable of handling nearly any high-end configuration an enthusiast could dream up” said Rajeev Kuruppu, Digital Storm’s Director of Product Development. “This meant the search was on for the biggest and baddest chassis available.  When we saw the Corsair 900D at CES we knew we had the enclosure we needed to make the original Hailstorm look like a small mid-tower system and not the bad ass high performance system it really was.”

The sleek brushed aluminum front panel peels back to reveal a vast interior with room for ten expansion slots, up to nine hard drives or SSD with three hot-swap mounts, four 5.25” optical drive bays, and both 2x USB 3.0 ports and 4x USB 2.0 ports for maximum expandability. The most impressive feature of the massive system is its ability to install two power supplies, giving enthusiasts an unlimited level of power to handle the most intense hardware configurations.

Prior to shipping to the customer, each Digital Storm system undergoes a rigorous 72-Hour Stress-Test. Digital Storm technicians stress-test and benchmark the system via industry standard testing software coupled with a proprietary testing process that detects components which can be prone to future failure.