The film Aliens has long captured the hearts and minds of sci-fi/action film buffs for its masterful combination of the two genres. It works on so many levels, from the art design to the direction and acting talent. If you ask any geek worth their salt what some of their favorite things were about the movie, the M41-A Pulse Rifle would be on that list. The pulse rifle is the United States Colonial Marines’ primary assault rifle in the film. Featuring a wicked style, under-barrel grenade launcher, and distinctive sound, it became synonymous with the film and as been paid homage to many times over in other films, books, and video games.

Many geeks have quested to get a pulse rifle of their own – from $800 dollar replicas, equally-expensive airsoft electric gun conversion kits, and even casting dummy models out of resin. Seeing the potential for profit, Matrix has brought a replica of the M41-A Pulse Rifle into the airsoft world as a whole unit – not a conversion kit. The Matrix Alien Pulse Rifle features the same wicked looks and style as the weapon did in Aliens, but at a reasonable, $285 dollar price point – a fraction of the cost of replica-props that are not even functional.

I have long-wanted to get into the game of airsoft, but lacked an “in”. When we got this AEG to review, I found it. But, I also had a big question on my mind: Sure, the pulse rifle looks great and would make a great display stand decoration, but how would it function in a real game against other players? Looking great is worth nothing if you can’t put rounds down range. 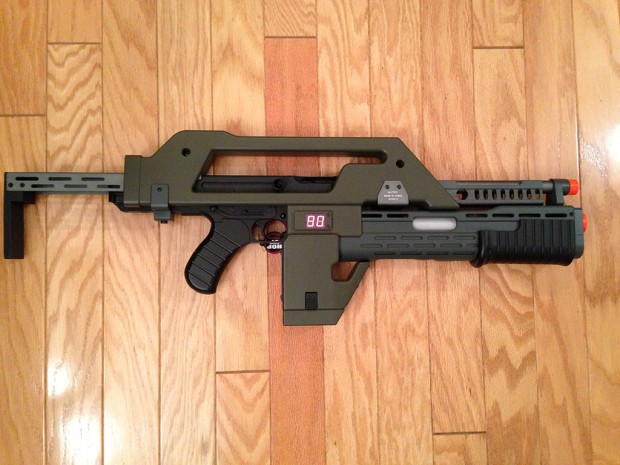 Un-boxing the Matrix Alien Pulse Rifle was an awesome experience. Seeing the pulse rifle in the box was like Indiana Jones finally laying his eyes on the golden idol in Raiders of the Lost Ark – the end of a journey to possess this weapon I had fantasized about blasting Xenomorphs with as a kid. Thankfully, Matrix provides some needed accessories with the pulse rifle.

After getting the rifle out of the box, I gleefully examined it. The rifle is rather weighty, coming in at 8 lbs, but most of the weight seems to be located in the gearbox area so it has a nice balance. The pulse rifle’s included 8.4V battery fits into the under-barrel shotgun, but that compartment is roomy enough to accomodate a 9.4V battery too. Yes, I did mention “shotgun” when we all know it was a grenade launcher in the film. This is a small oversight on the part of Matrix but an excusable one as it is not functional anyway (although you can “rack” it). I would love to see a modder make the shotgun functional, but I digress…

The magazine is a short, 190 round Thompson magazine, which fits into the pulse rifle’s magazine area without too much fuss. The reason it is a Thompson magazine is that the Matrix Alien Pulse Rifle was built in a similar method to the one seen in the film. The rifle is based around a Thompson machine gun, but with a heavily modified body. Unfortunately, this means that finding magazines for the rifle will be difficult in a lot retailers so you will probably have to get some extras online. There is a plastic cosmetic plate that needs to be unhooked before access to the magazine compartment can be granted. In that compartment is also room for a 9 volt battery, which runs the rifle’s functional, LCD ammo counter. The ammo counter starts at 95, and will count down to 0 twice before you are out of round in the magazine. 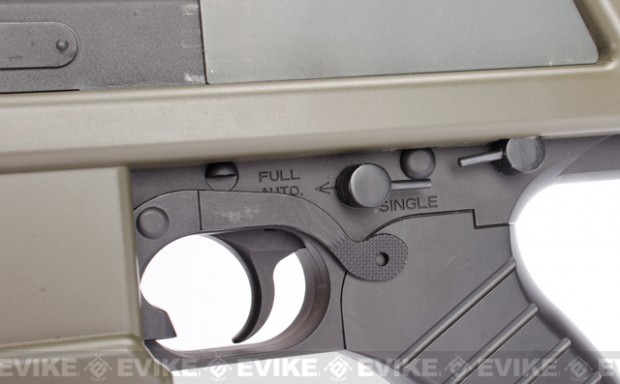 I brought the Matrix Alien Pulse Rifle out to Hollywood Sports Park, or “HSP”, in Bellflower, CA, for an airsoft event that Zombie Studios was hosting for some gaming journalists. I figured that not playing with pro-players would allow me some breathing room. Little did I know that at least half of the journalists on-site had played airsoft for a long time. So, it was going to be a hell of a fight. Before actually getting it on to the field, one of HSP’s field managers allowed me the use of a chronometer to get the performance stats on the rifle.

On the box, it was rated at 380 feet per second. In my tests, the pulse rifle pushed a constant 396 feet per second, 16 feet per second more than the advertised stats. This is an excellent metric as the park has a 400 feet per second maximum on the guns you can use there. Where the Matrix Pulse Rifle’s performance looked like it would lack was in its rate of fire, which clocked in at only 12.5 rounds per second. This is somewhat in line with other Thompson AEGs, but not up to the standard of most M4 and M16 AEGs. So, while it is very powerful, I was worried I would not be able to lay down enough fire for my team.

I loaded up my magazine, wound up the spring, and got the weapon ready. We played five games over a couple hour period and I could not be happier with the pulse rifle’s performance. The low rate of fire complimented my magazine’s ammo capacity as I did not eat up rounds very quickly, even in the full-auto mode of the weapon. Additionally, my pulse rifle sounded REALLY loud in comparison to the other guns on the field. It was very distinctive and its bass-laden thuds gave it additional personality, especially when considering its high feet per second. Using the Matrix Alien Pulse Rifle reminded me of a bolter from Warhammer 40K in a way. I was actually able to lay down some very effective suppressing fire. To be fully effective in this role, I would highly recommend getting a 400 round hi-cap magazine for it. The only issue with that is the magazine will be too long to fit in the magazine compartment. You will need to find some place to hold your cosmetic plate until you are ready to remove the magazine.

Maneuvering the pulse rifle is a bit of a challenge as, while well-balanced, it is a bit bulky, and its large body tends to hit things a lot in CQB and when shooting from cover. The rifle does not include mounting points for a sling, so I used a universal sling from Tsunami Airsoft in Orange, CA. It is interesting to apply a fictional weapon to a real-world situation. You can actually gleam a bit more about the marines fighting capabilities in the movie and why the xenomorphs were so easily able to outflank them. In the dark corridors of Hadley’s Hope, they had both advantages and disadvantages. In the situations where the enemy would charge them from one direction, the pulse rifle was able to make short work of them. Coming out of the ceiling or side duct work, the marines would have had difficulties in getting their weapons to bear – the biggest exceptions being the colonial marines flame units. But, I digress… Even though the Aliens fanboy in me just wants to talk more about the movie.

Overall, the Matrix Alien Pulse Rifle is a terrific piece of kit and a very inexpensive way for fans of the movie Aliens to own a a part of sci-fi folklore. Additionally, it is an excellent airsoft electric gun for field use – just make sure you pack some extra magazines and check those corners carefully as the pulse rifle is a bit hard to use in CQB. You can find out more on the Matrix Alien Pulse Rifle at Evike’s official product page.