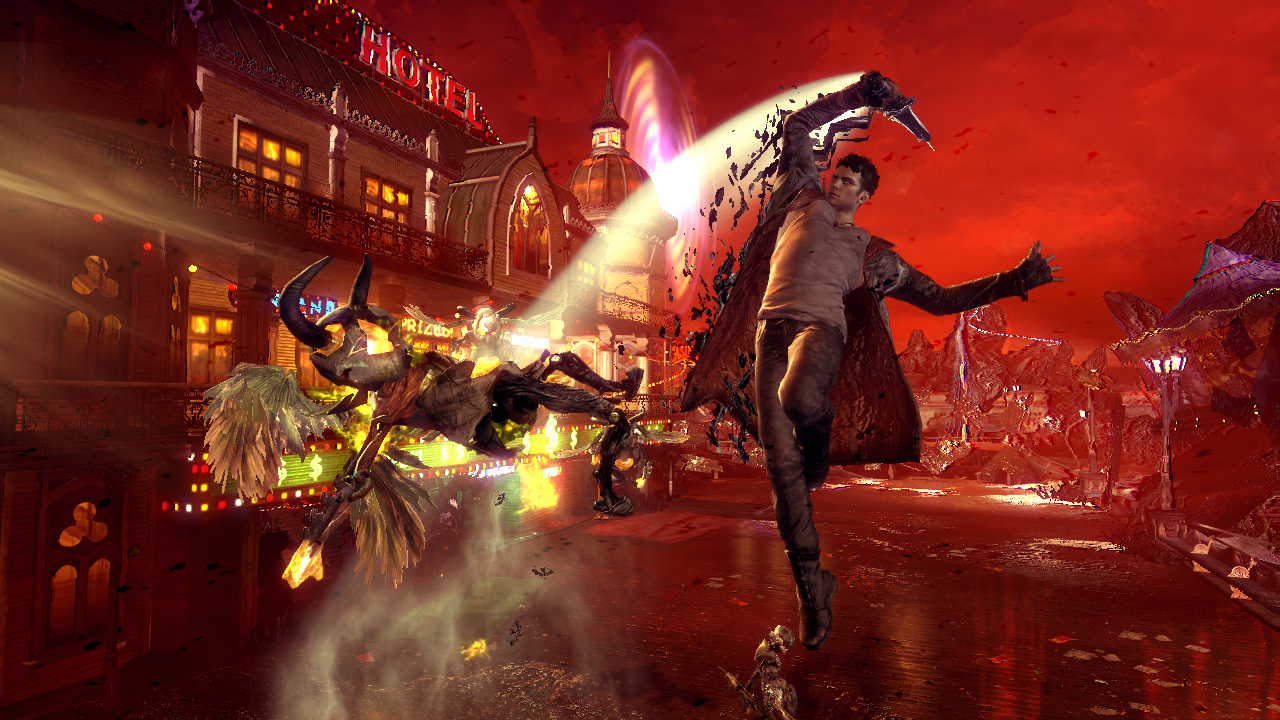 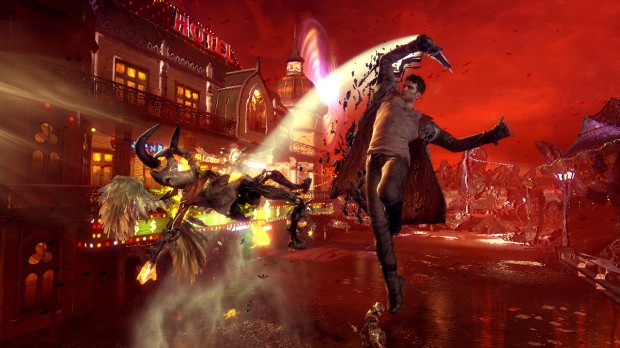 Capcom, long-time publisher and developer of the Devil May Cry series, decided a few years back to do something different for its fourth installment.  Instead of doing another sequel, Capcom wanted to reboot the series from a more Western point of view, thus giving the title over to English developer, Ninja Theory.  Long time fans of the series protested this changing of developer, worried that a new group of people would not handle Dante and the mythos of the Devil May Cry universe correctly.  Well, I am here to tell you that those fears are unfounded and that DmC: Devil May Cry is a game worthy of its lineage.  Ninja Theory understood what made the Devil May Cry series a hit and successfully made this reboot with an engaging story, fantastic aesthetic designs, and great game play.

The story begins with Dante, the hero of the previous Devil May Cry games, waking up from a hangover in his trailer near a theme park.  He is warned by a witch named Kat that a demon is hunting him, unfortunately this warning comes just seconds before the demon pulls Dante into Limbo.  Once Dante escapes the demon and returns to the world of the living, Kat takes Dante to see the leader of The Order, a group of individuals fighting to better the world that they all live in.  The leader of The Order, Virgil, explains to Dante that he and Dante are offspring of a union between angel and demon.  Being Nephilim, half angel/half demon, means that Dante and Virgil are the only two individuals that can save the world from the grasp of Mundus, the demon that has enslaved the people of Earth.  Learning this, Dante sets out to defeat Mundus and avenge the fate of his mother and father.

The story of DmC: Devil May Cry is well written and paced.  I found myself gripped from the very start, wanting to play the next level just to see what happens in the plot.  The character of Dante is updated considerably, starting the story off as an individual who doesn’t care about the world or its problems.  As Dante learns more and more about his past, through unlocking lost memories, Dante begins to feel a driving need to avenge the death of his mother and the banishment of his father at the hands of Mundus.  He becomes a driven individual in pursuit of a goal, while maintaining some of his “devil may care” attitude.  The other characters that are involved in the story are just as interesting as Dante.  Virgil has come to grip with his place in this battle at an earlier age then Dante, and serves as a guide for what must be done, while Kat is a capable accomplice with a past that haunts her to this present day.

While not perfect, the story of DmC: Devil May Cry is incredibly engaging and interesting to follow.  Seeing this world through the eyes of a Western developer, such as Ninja Theory, helps make the story relate better to Western audiences.  Time for a little disclosure here: While I did play the other games of the Devil May Cry series, I never felt that these characters or story lines were perfect.  When I heard that a reboot was in the making, I was one of the few that was optimistic and excited to see what direction a Western developer would take.  That being said, I truly prefer the story of DmC: Devil May Cry over any of the older versions of it.  This story just sucked me in and kept me up later than I had planned to be up.

DmC: Devil May Cry is a hack and slash game at heart, with some minor role playing game elements thrown in.  Dante uses a variety of weapons, some angelic in nature, some demonic, to destroy Mundus’ army.  Each weapon has different qualities to them, and can be upgraded with different move sets through the RPG system.  Dante collects souls as he progresses through the levels, and can spend these souls at various shops to unlock new moves or increase his health.  Dante can also collect special lost souls, health upgrades and keys that unlock doors that lead to special battle events.  There is plenty to search for in each level of DmC: Devil May Cry. 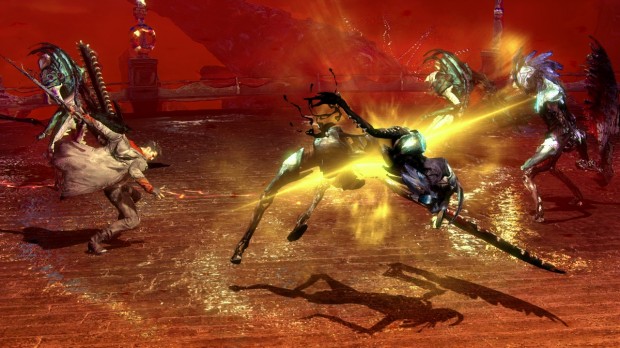 DmC: Devil May Cry has its standard difficulty settings at first, then you can unlock different modes for your next game play, some of these modes are incredibly hard.  To find everything in the game is going to need at least two play throughs.  You unlock certain moves and weapons that are needed to reach or open doors during the progression of the story.  You keep these moves and weapons when you begin a new game plus, allowing you to reach certain doors and areas previously unreachable in your first game play.

I love the design for DmC: Devil May Cry.  The city looks appropriately menacing, with larger then life design elements, similar to Tim Burton’s vision of Gotham.  The world gets even more interesting when Dante gets pulled into Limbo, when the buildings get a little more twisted and you can see the shades of people still wandering the streets in the real world.  Occasionally, as you are running through the level, words will appear on the  street or plastered across the buildings, as Mundus is giving orders to his minions to stop you.  It is a simple little aesthetic design, but I thought that really helped give me an idea of the influence that Mundus has in Limbo, plus just give DmC: Devil May Cry a really cool design.

The music in DmC: Devil May Cry just plain rocks.  The designers used more of a heavy metal sound for the music, and it really helps keep the action feeling frantic and fast paced.  I got myself a few times really getting into some of the fight sequences, especially when the music came over my headsets loud and fast.  Voice acting for DmC: Devil May Cry was just want it needed to be, not perfect but not over the top nor cheesy.  The characters each had their own personalities and these came through their voice acting sessions admirably.

Dante’s move sets and jumping ability have been designed to give fighting sequences a very fluid design that flows from one combatant to the next.  The only breaks occur when the game introduces a new type of opponent.  The screen will freeze, and zoom in on the new opponent, showing the demon’s name and framing the demon in a picture so you can get a better look.

With Capcom giving design of their precious Devil May Cry series to a new developer, Ninja Theory, many people were worried that this would be the end of their beloved franchise.  I can safely say, it is not the end.  In fact, this may be the beginning of an even better set of games.  While the original Devil May Cry series was an outstanding set of games, I have always felt that some of the story gets distorted in it’s translation from an Eastern developer to a Western game player.  With DmC: Devil May Cry, we have a Western story for Western players and it feels like a much more complete experience, for me, this time around.  The game play is solid in it’s simplicity of button mashing combos, but with the addition of new moves and four choices of weapons in the earlier stages, gives the player a possibility of depth and various tools to dispatch demons with.  I loved the aesthetic design choices for this game, and felt that the world was truly interesting to wonder through, especially the Limbo sequences where the world takes on a particular bend and twist.  If you have never played a Devil may Cry game, start here.  For fans of the series, rest assured this game is a spiritual successor to the originals and, in some areas, far more superior.  DmC: Devil May Cry is a must play for anyone who plays video games.