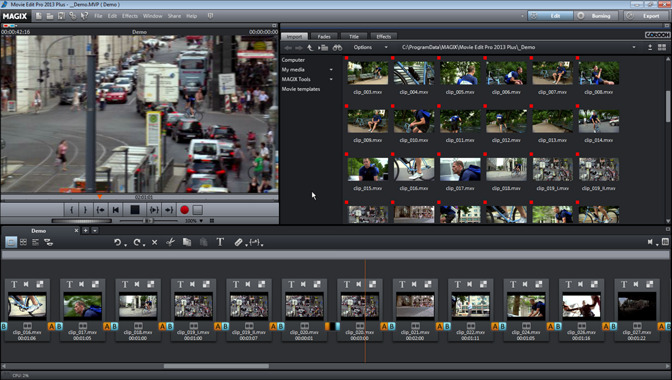 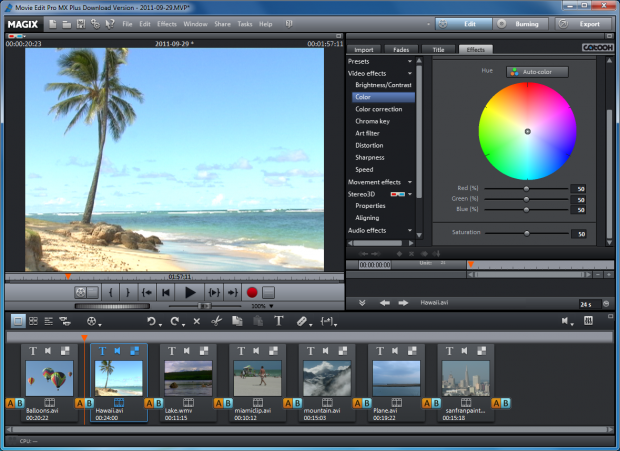 So, once upon a time I used to make my own DVDs and I worked in television as a director and was trained on the state of the art, non-linear video editing systems.  Those days have come to an end but I have, in recent years, wished I had an editing program that was user friendly enough for quick-edit projects but also robust enough to have some depth for when I have some time to really detail a project.  The people at Magix seem to have had this goal foremost in their minds when developing Movie Edit Pro 2013 Plus. Recently, they put the program on Steam, which makes it more affordable to distribute and easier to use on the go.

To test the application’s quick editing features, I just opened up the program, went to open file and highlighted about 20 pictures and hit open.  The program loaded them in a timeline based on the pictures’ order in the previous file in a line on the timeline bar.  Moving them around is as easy as click and drag.  Between each image is an A/B section representing the wipe/fade that has been chosen with a cut being the default.  Clicking and scrolling down the effects section offers dozens of possibilities for transitions and all you have to do is click on the one you like and drag it down to the transition you want to use it on.  To add audio just open it and it automatically drops it down to a track.  From there, you just decide if you want to lengthen or shorten your pictures with different transition times or screen time  or whether to edit off the end of the music and have a nice fade transition for the music and video at the end.

Probably one of the most important thing to do is to “save as” after each step, using different names regularly.  One of the things I found at this point is that the version currently on Steam has some glitches and crashing errors.  I thought I had finished one project and went to upload it to YouTube and the program crashed and didn’t recognize it had crashed when I went to restart it.  I had to restart the computer and then was able to load up the video only to find the audio was missing.  I went back to check the most previous versions of the edit and the audio was no longer present.  I tried to add it again but the project appeared corrupted.  Luckily, the audio was secondary to the point of the project so I didn’t worry about it. Had I been on deadline with a project, this would have been really frustrating.  In the two worst case crashes it did send a crash report so, hopefully, those issues will be taken care of soon. 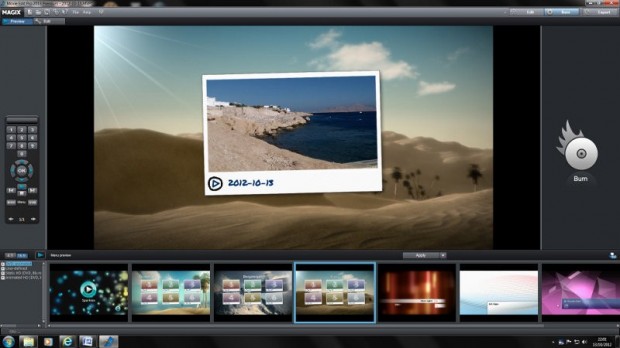 Starting your project is very similar to above but then you can do more detailed work if you want.  One of the greatest features of this particular editing program is that just about every action button has a video instruction button attached to it so that all you have to do is click and you get to watch a step by step instruction and explanation of its use.  This isn’t just a great editing program – it is an instructional course that teaches the things you need to learn.  If you understand the basics, you can skip their videos. If later on you aren’t sure about how to edit the time of a transition, for example, you just hover your mouse over it in the pull-down menu and you will be offered a video instruction.  This program is worth it just for the editing instruction clips. I have taken multiple editing classes and working with this program was better than most and far more affordable.

Movie Edit Pro 2013 Plus (also shows as Movie Edit Pro MX Plus in some locations) gives you just about every advanced feature you could want, such as adjusting the length and location of mixes, multi-track video and audio editing, video and sound cleanup and stabilization, filters, really just about anything you want to do with a video or audio project.  Then, when you are done, you can save it down into any format, burn it down to disc or even save it directly to YouTube  Facebook, and other online sources.  I was able to use three different video sources of three different qualities and the system was able to adjust quality and, using transitions, make the videos work together nicely.  The “Pro” in the name is accurate, so don’t let the surprisingly reasonable price make you think otherwise, you can get professional, broadcast quality editing done with this program.  Just save often to be prepared for glitching and crashes while the bugs get worked out. 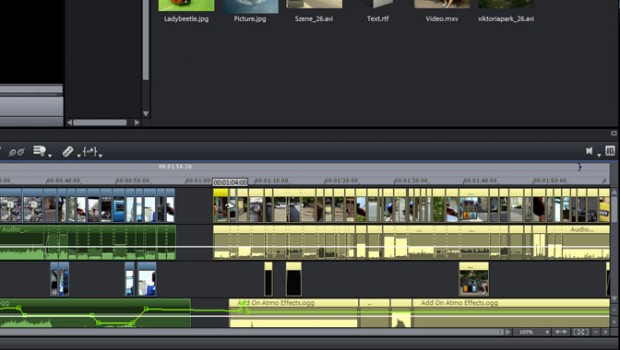 The Benefits of Steam:

I would like to point out the versatility of having applications like this on Steam. If you have your account on multiple computers, you can log in, download the program, and start editing.  That is so important with this kind of program since I will be able to be out on the road, start an editing project on my laptop then pick it back up and finish it on my desktop.  I can then post it online in any format I want and show people the work from pretty much any online device.  Video editing is a notoriously localized and closed system – thanks to Steam, the versatility of use is greatly increased plus the program is digitally distributed and advertised giving the publisher savings they can pass on to the customer.

If you are an amateur video maker wanting to make a slide show for a family get together, a cat lover who wants to edit and upload their latest meow mix, or someone who makes a living editing videos from weddings this program will do what you need.  If you don’t know how to do something in this mostly intuitive program then there is a full class worth of video tutorials to teach you in a step by step process that will make you feel like a pro.  Just remember to save often until they get the bugs worked out!