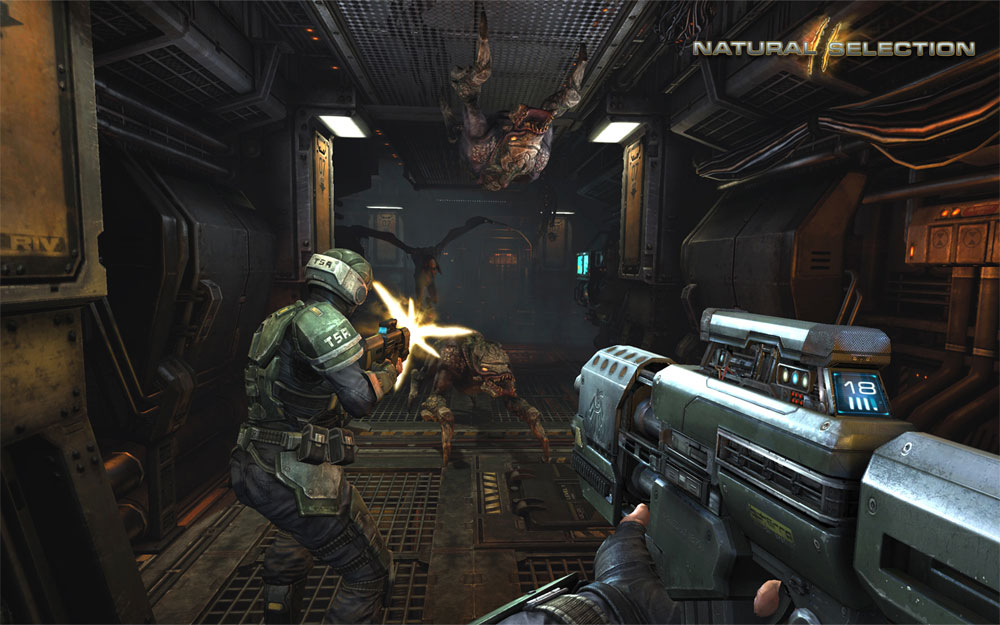 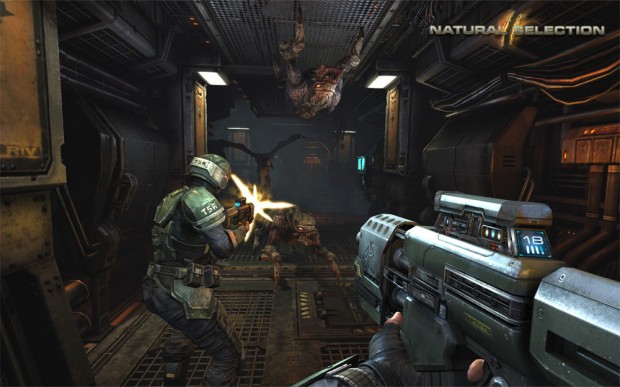 Well, let’s be honest, the entire story line for Natural Selection 2 is seen through game play mechanics and through whatever the player assumes through looking at his or her surroundings.  Unknown Worlds Entertainment stayed away from any type of constructed story line for this game, aside from setting up two opposing forces within a small confined space.  Essentially, Natural Selection 2 is set in the future of the human race, where we are fighting for survival against an alien species named the Kharaa.  Everything else in regards to the story is left up to the player.  For me, as a fan of good writing in video games, this always seems to be a risk for developers.  However, when one of the most popular video games in history has absolutely no narrative driving it, I’m looking at you Counter-Strike, then we can understand that a game can be good without giving the player a constructed story line to follow.  Simply put, don’t expect an epic story line, just hours and hours of marine versus alien combat.

Before I move onto the game play for Natural Selection, let’s address the large elephant in the room in regards to Natural Selection 2.  Yes, Natural Selection 2 resembles Aliens in more ways then I can count.  Unknown Worlds was obviously trying to replicate the feel of the second movie, even right down to how the weapons feel as you fire them.  Most of the time, I would be a more then a little upset with someone taking liberties with a franchise that I so love, however, Unknown Worlds does it right.  This game is a better Aliens game then any other game out there, even the ones that were marketed as Aliens games.  The upcoming Colonial Marines game better be at least this good, or the Aliens franchise better move on over to Unknown Worlds for further development. 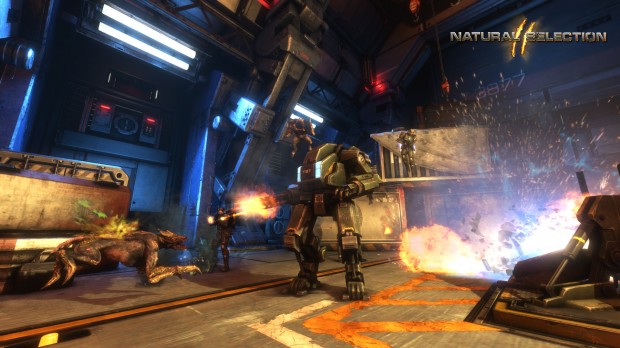 Without any narrative to make the game shine, Natural Selection 2 solely relies on its game play, and it is well done.  As I said earlier, Natural Selection 2 combines first person shooter elements with those of a real time strategy game.  Players start off in a lobby, where they get to select their side; either Marine or Alien.  Once in game, one player from each side will be allowed to take the role of leader.  This leader sees the battlefield differently then the rest of the troops, because it is the leader that will issue orders, place destination markers, research upgrades, or drop in equipment.  The leader’s game play for Natural Selection 2 plays like a real time strategy game then a first person shooter.  It is your job to command your troops or aliens to capture strong points and to make sure that they are well supplied.

For the rest of the team, game play differs greatly depending on which side you are playing.  For the Marines, you start the game with some basic equipment, like a pulse rifle and a flash light.  As the game progresses, you can receive other equipment from your leader, like shot guns, sentry turrets, or battle suits with twin machine guns.  Your job is to maintain the power to the areas you have under your control, while trying to expand your territory into the alien’s controlled zones.  This sets up some interesting game play mechanics, as you have to play as both defender and attacker in order to win.  The aliens will target your power supply, which will knock out the lights, and any automated defenses you have in that area.  This means that you have to switch over to your flash light, just to see the aliens.  I absolutely loved this!  It set up some really intense gunfights in the dark, with just your flashlight and the muzzle flash from your rifle to light up your enemies.

The Kharaa core game play mechanic is the same as the marines, you simultaneously attack and defend in order to spread your alien influence over the entire map.  However, the aliens can evolve into different types during the game, each with different abilities.  The base form attacks with jaws and is quite agile, while others have stronger attacks, can fly, or even run on the ceiling.  The agility of the alien species really makes it hard for the marines to target them, especially if they come at you in a group of two or three.  Just like the marines, you have your own automated defenses and upgrades that can be dropped to you from the leader, and you have to be able to defend and attack on the fly.

Natural Selection 2 feels completely balanced to me.  I never once felt that I had either an advantage or disadvantage over my enemy that was based on an unbalanced mechanic.  Sure, if you are saving up to run in 3 large battle suits, and have marines willing to use welders to heal them, then the aliens are going to get completely over run, but that can happen in any game.  I had some issues with stability in the beginning during game play, with crashes that would shut down the entire game, but these were few and far between.  I have yet to determine whether these crashes were due to my hardware, or Unknown Worlds, but just beware that you may or may not experience this in your game play. 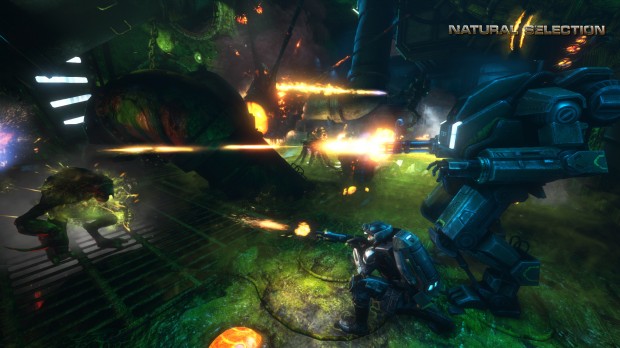 The look of Natural Selection 2 is fantastic!  From darkened corridors to alien infested caves, everything in the game just adds to the ambiance and experience for the player.  I love the way the developers added in little touches to make the experience that much more fun, like having the lights go out in a section when the aliens cut the power.  This causes the emergency lighting to come on or, in some cases, completely sends you into utter darkness.  This really added to the tension that you already feel by playing a close combat first person shooter.  The overall look of the game fits its design and is looks good as you are playing.  The sound of Natural Selection 2 also fits the design well.  The sound of the pulse rifle is reminiscent of Aliens, without infringing on copyright issues.  The soundtrack is absolutely forgettable, though most of you won’t play this game for the music.

Natural Selection 2 is good, very good.  The game play is varied and well executed, without ever feeling out of balance.  Combining both first person shooter and real time strategy elements scared me at first, but Unknown Worlds did a fantastic job in meshing these two elements, giving players the sense that they are involved in something larger.  With the leader giving orders to capture objectives or to build resource gatherers, the other players can either following along, or do there own thing.  This can cause some frustration, especially for the player in the leader role, but in most games  the sides played together well and worked together to obtain their goals.  Natural Selection 2 is the best Aliens game out there, without actually being an Aliens game.  Unknown Worlds understood what made Aliens a great movie, and delivered to us a game that replicates that experience, without the actual copyrighted material.  Natural Selection isn’t without it’s flaws, with just six maps at launch and a step learning curve for those that are new to the game, but if you are willing to put up with these you will have a fantastic gaming experience ahead of you. 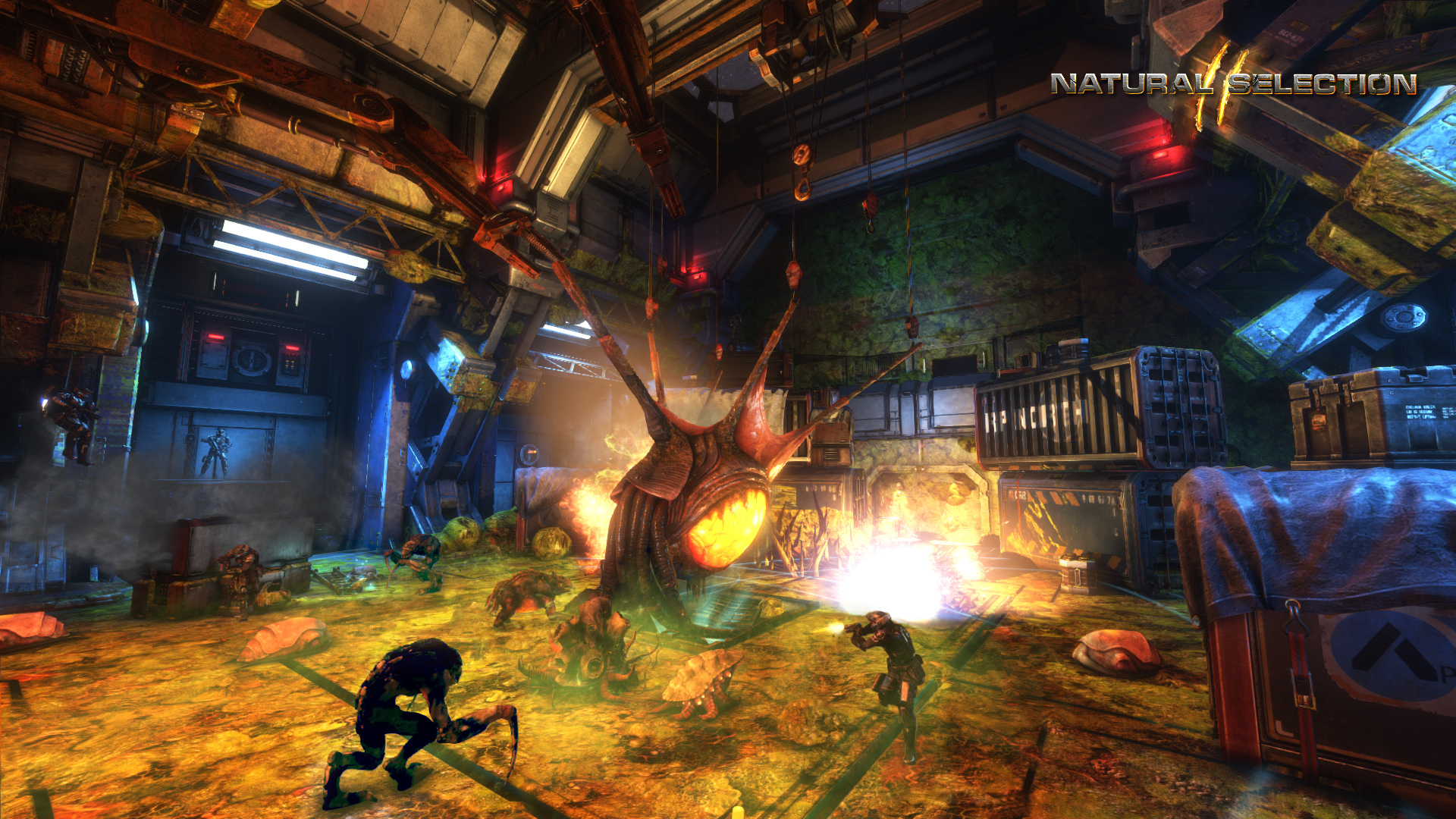 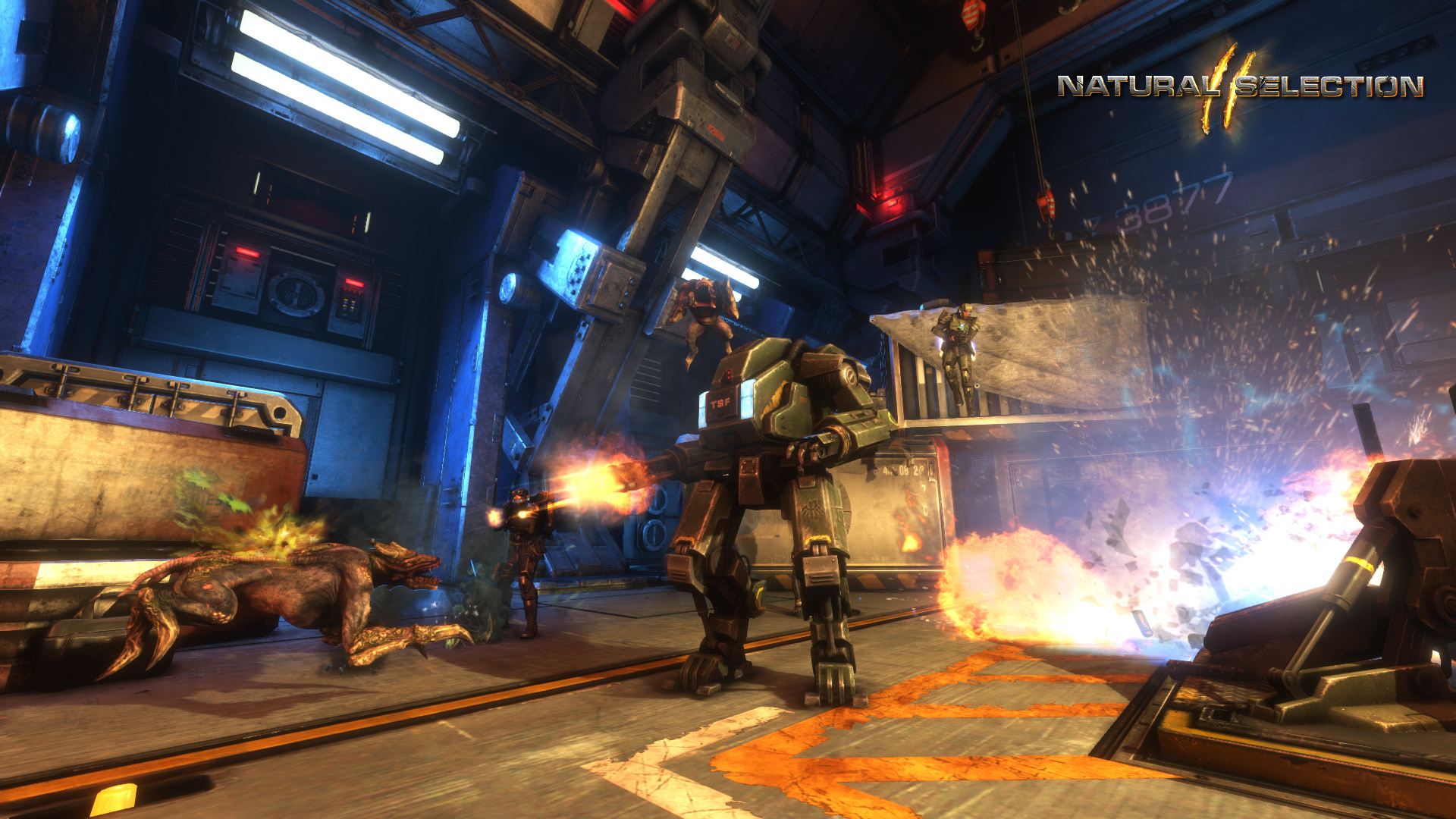 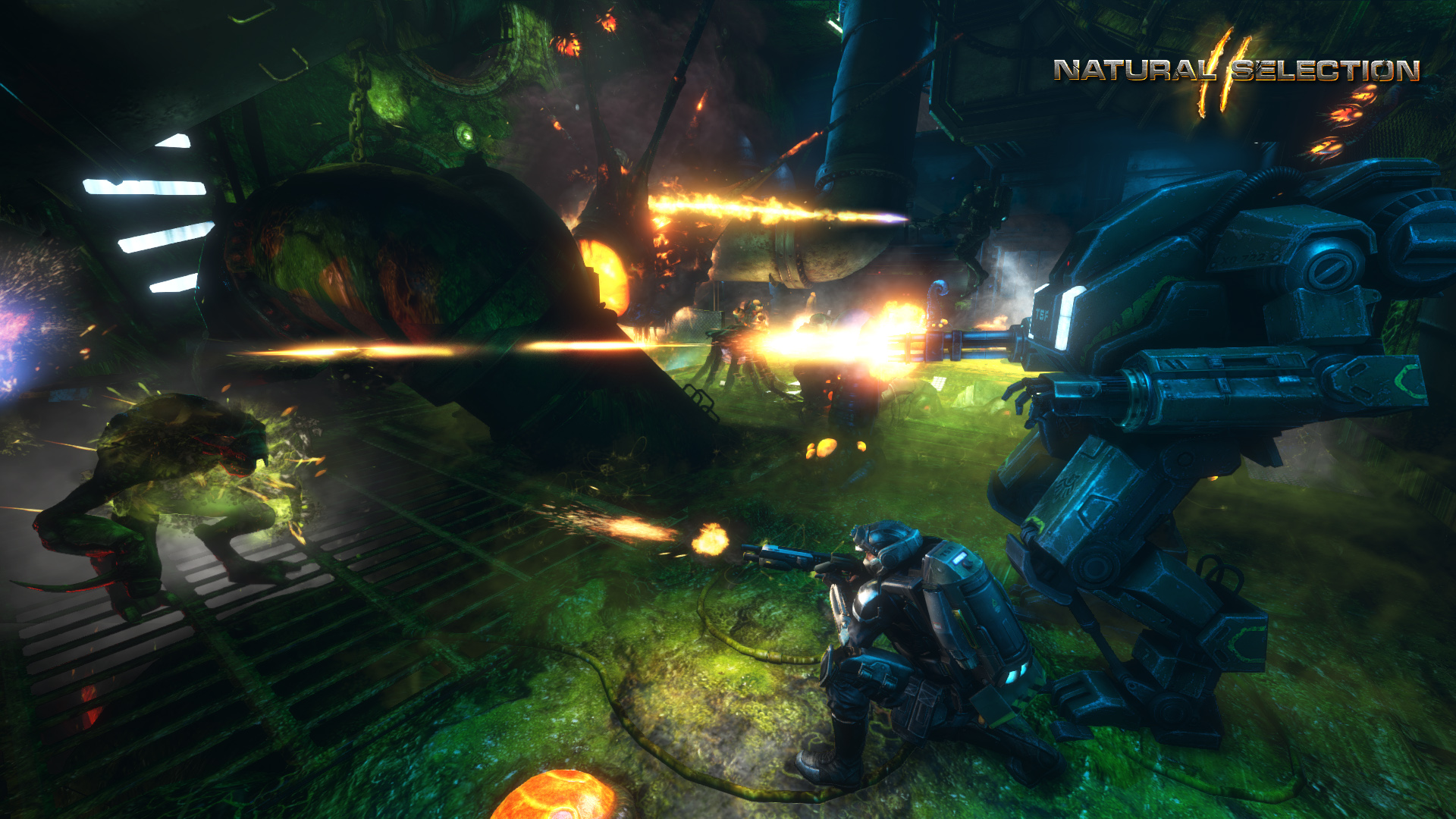