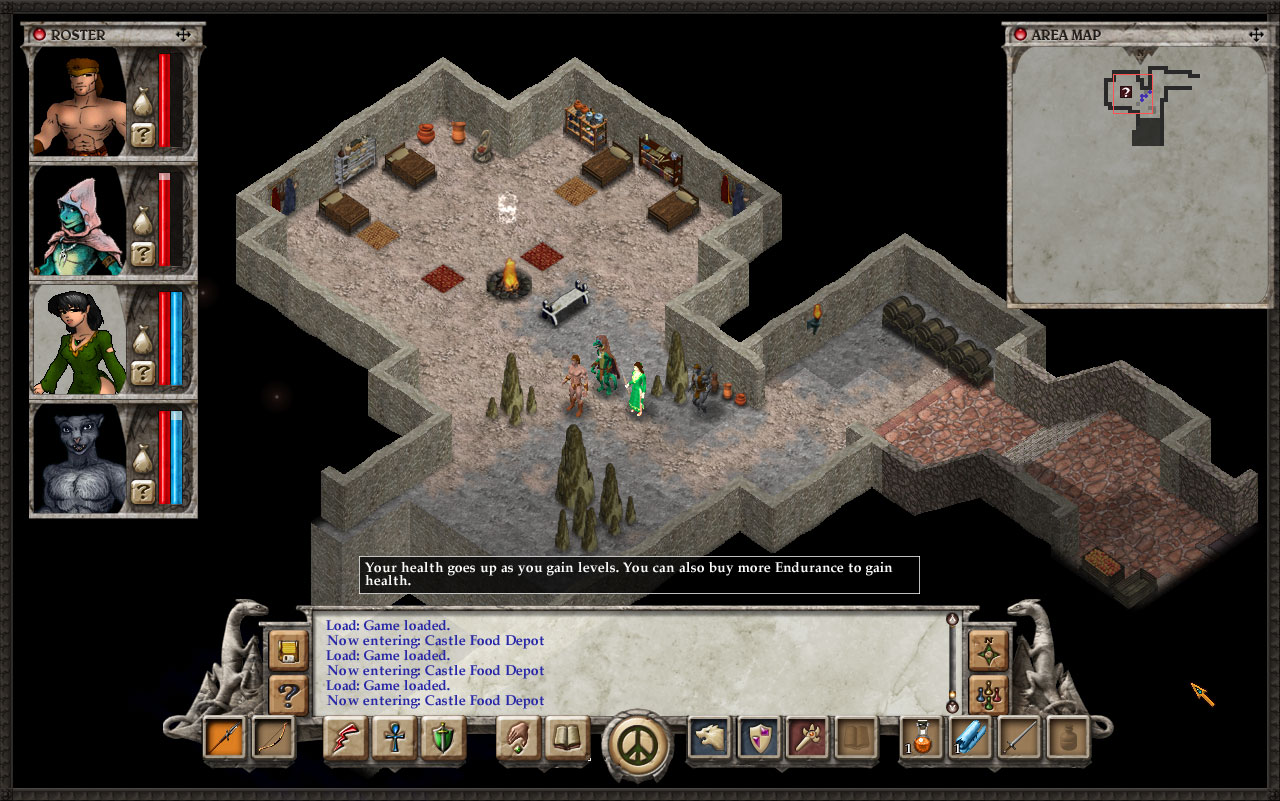 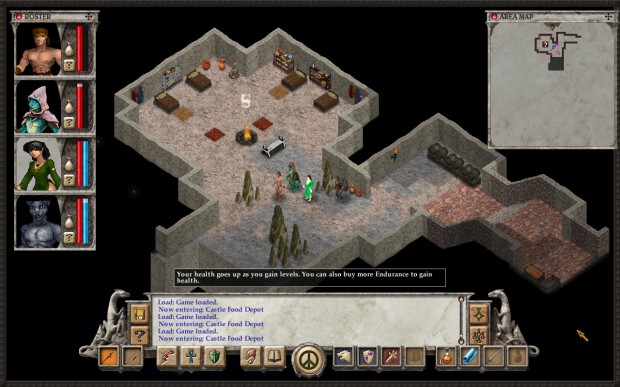 Jeff Vogel and Spiderweb Software has brought their latest version of Avernum 6 to the iPad.  Avernum 6 HD is built using Spiderweb Software’s tried and true methods of creating games, focusing on story line and mechanics rather then developing up to date visuals.  What comes out in the end, is a very solid game that feels like a classic role playing game that I played as a kid.  Avernum 6 HD ends up having a great story line that will suck you in and keep you riveted until the very end, but is presented using visuals and sounds that feel outdated, plain, and just down right ugly with little or no animation on the screen.  Despite the lackluster graphics, Avernum 6 HD emerges as the best option for an rpg on the iPad, and as a very solid game choice overall.

Avernum 6 HD has a story line that starts off in humble beginnings, but ends in epic battles for the fate of the entire land.  The land of Avernum began as a prison colony for the worst offenders, since Avernum is located entirely underground and the only way in or out is through a magical portal.  Since then, the land of Avernum has become a wild frontier with adventurers and pioneers looking for fame and fortune in a harsh land.  Recently, life in Avernum has become that much harsher as the mushrooms, Avernum’s only source of grown food, has suffered from a blight.  Sensing weakness from the residents of Avernum, the reptilian Slithzerikai invaded from the south, destroying everything in their path.  Faced with a blight and an invading army, the inhabitants of Avernum began to evacuate through the portal in massive waves.

You begin the story as a group of four adventurers that joined the Avernum military for an extra share of the food.  While other members of your squad has been sent off to fight the invading Slithzerikai horde, you have been stuck with guard duty in a city that is shrinking in population.  Your story starts with humble beginnings, dealing with a rat infestation in the cellar, then you get to move up to goblin issues to the south of the city.  Your role in Avernum’s future becomes more important with each successful quest line, ultimately ending with the entire fate of Avernum on your shoulders.

The story for Avernum 6 HD is solid, thought it lacks a polish needed to truly make it great.  I love how the story draws you into a world that has been completely built underground and makes you feel part of the overall picture from the beginning, but your characters will always feel flat and uninspired themselves.  No video game lives in a void, so it is hard to play games like Avernum 6 HD and not compare them to games from Bioware or Bethesda, companies that are experts in making you feel like you are part of an epic story and makes each character meaningful to you.  Avernum 6 HD has a fantastic story that is presented very well, but your party and its members are never truly fleshed out and made interesting.  Overall, though, the story shines above this particular issue and makes you want to keep playing, just to find out what the next part of the story is in Avernum 6 HD.

The mechanics of Avernum 6 HD are as old as it’s graphics, but work really well on the iPad.  The point-and-click method of moving and issuing combat orders is made easier when all you have to do is touch the screen once or twice.  Movement is solely done by just touching where you want to go, then your party will shuffle off to that point.  Combat requires a few more button presses, but feels just as intuitive.  You can just touch the enemy once, and your member will charge up and swing their weapon or shoot off an arrow, depending on what is equipped.  Spell casting is just an extra push of the screen, that brings up the spell selection menu.  You press the spell you would like to cast, then press the unfortunate recipient to finish the spell.

The user interface feels just like an old rpg interface from twenty years ago.  Your party is listed to the right of the screen by using their portraits with their health and mana bars.  In the upper right hand side of the screen is your mini map, an absolute necessity in any rpg, while at the bottom is your text bar that shows messages and has a few combat buttons attached to it.  Most dialogue boxes will pop up over the main map, and will give you choices as to how you want to address certain situations.  If you don’t know what an item is or what a spell does, you can just hold down over the icon for a second and a interface box will pop up explaining what that item or spell does.

The mechanics for Avernum 6 HD made the transition over to the iPad very nicely with only slight issues in precision targeting, but I attribute that to my huge fingers and not Spiderweb’s design flaws.  Spiderweb understood this issue and made sure to add confirmation button clicks for important items, such as leveling up statistics.  Once you have selected the stats you want to raise, you have to press a confirmation button, which helps cut down on any errors in reading where your finger is for a particular stat.  Avernum 6 HD feels very natural on the iPad and made the transition from mouse and keyboard to touch screen extremely well.

OK, let’s talk about the huge, stinky elephant in the room: Avernum 6 HD’s visuals and sound.  Spiderweb Software has been making games since 1995 and the only thing that has changed since then is the story.  The graphics and sounds look almost exactly like they did almost fifteen years ago, which is a bad thing.  I understand a lot of people say that a good story will beat bad graphics every time, and as much as I hate too, I have to disagree with that.  Video games are a visual media, they use visuals and sound to tell the story of the game.  Without a strong story, good visuals and sound will fall flat.  However, the opposite is just as true.  Without good visual and sound, the story isn’t reaching the player as well as it could.  The player will always look at the graphics and listen to the sound and be taken out of the experience, because they will always see outdated graphics and listen to bad sound effects.

There are little to no animation in Avernum 6 HD, which is quite unsettling.  It’s almost comical to see your entire party shuffle to the next location, almost like they came right out of an episode of South Park.  Characters will swing their arms to attack, and you will see projectiles in the game, but beyond that there isn’t much else to see.  Avernum 6 HD is listed as an high definition game, at least that’s what I assume the HD means in the title because I don’t see anything high definition about this game.  The actual visual designs of Avernum 6 HD are quite nice, the world is interesting and the creatures that inhabit them are designed well, just poorly executed in terms of actual visuals.

Avernum 6 HD is a game that would have won many industry awards about fifteen years ago, but in today’s market will be overlooked by many people.  Avernum 6 HD has a great, epic story line that pits a small band of heroes against both an invading horde of monsters and a blight of the only crop that is available to the people of Avernum.  Avernum 6 made the transition from the PC and Macintosh to the iPad very well in terms of mechanics.  I only had slight precision issues, which is forgivable and didn’t break the game play for me at all.  The true downside to Avernum 6 HD is it’s presentation in terms of graphics and sound.  Avernum 6 HD just looks way to outdated in terms of visuals and sounds just as bad in today’s market.  While the story does a great job in compensating for the ugly visuals, the visuals and sound still takes its toll on Avernum 6 HD, making this a good game instead of a great one.  Avernum 6 HD is available now for the Apple iPad, iPad 2, and iPad 3.