Sometimes when it comes to doing a product review it takes a little longer than usual because you can tell this product is a next step, that the company that made it plans to show it proudly to the world and that this product will be showing up on the competitive circuits.  You have to take a little more time with such a product to make sure it performs up to the company’s claims, that is is thoroughly tested and that it can be a new standard.  That’s why it took a little longer to review the new Tritton AX Pro+ 5.1 surround headset. 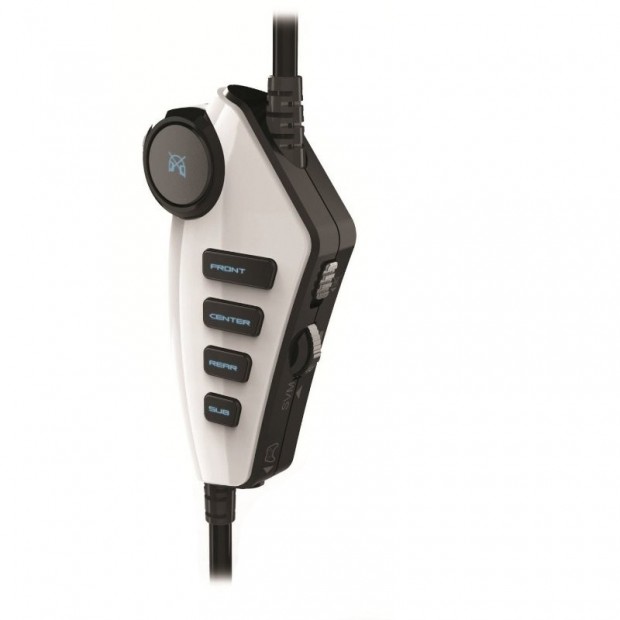 True Surround Sound headset with a microphone that will work with your PS3, Xbox 360, and PC/Mac. For the audio or movie enthusiast, the AX PRO+ is also compatible with any device that features a digital optical or 3.5mm analog 5.1 outputs.  Built on the successful AX360 Platform, the AX PRO+ features hardware Dolby Digital decoding and eight independent speakers to deliver true 5.1 surround sound audio.  Upgraded speakers have been repositioned to provide crisper sound and more accurate 3D positioning.  The vibration feature of the AX360 has been replaced by a new subwoofer that delivers improved low end punch and skull rattling bass.  Other advancements include an easy to use illuminated inline controller with a microphone mute switch, independent volume control for game/chat, and the ability to custom tailor volume levels.  With the ability to connect the microphone via the Xbox 360 controller port, USB, and analog 3.5mm inputs, the AX PRO+ is the most versatile headset on the market and the only headset you’ll ever need. 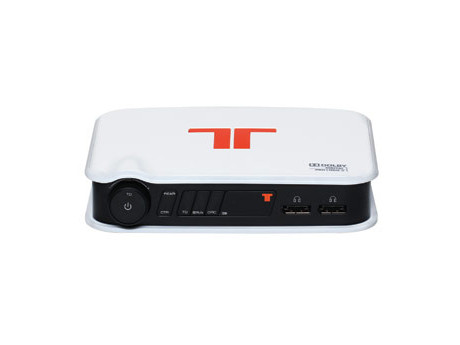 This system has one of the easiest setups I have ever seen, the directions literally show a single diagram with where to plug everything into everything else.  It took minutes to set up and once you have gone through the setup procedure resetting it up or setting it up on another system only takes seconds.  The only concern I have with the setup is it assumes you have experience with optic cables and know to remove the rubber tips on them before trying to plug it in.  It won’t work if you don’t so you can figure it out pretty fast. 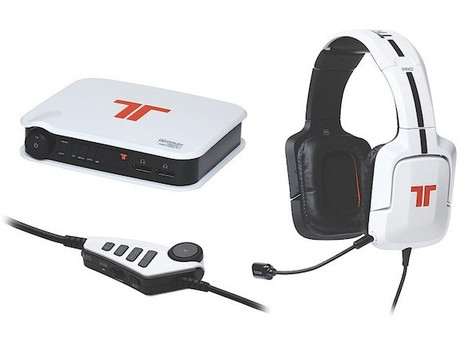 Here is where things become pure joy.  There is nothing quite like throwing on these headsets and jumping into a game such as Transformers: Fall Of Cybertron and hearing explosions all around you or your favorite FPS (I don’t have a favorite so I tore through a whole bunch for this review) and listening for every sound detail to locate the enemy and hopefully get the drop on them before they get the drop on you.  With a headset of this quality not only does your experience become more immersive but your gameplay should improve because of 3D sound enabling you to better locate enemies.  It won’t make the young gamer on heads sound any less whiny or make the complainer’s expletives any less annoying but with independent game and chat sound level controls if they get too annoying you can turn them down and the game up.  If you aren’t sure if you are coming through clearly when you tell the team they should flank left and they run right down the middle you can adjust your headset so you hear yourself in it and know it was just stupidity.  I ran this headset through both XBox 360 and the PS3 on these paces and the only signs of game audio weakness turned out to be the game itself, when a headset is this good you can tell which games took the extra time to make sure their sound was exceptional.  I found it particularly enjoyable playing Damage Inc. Pacific Squadron WWII Collector’s Edition which came with a Saitek Pacific AV8R Flight Stick because the immersion was intense and complete as if they were made to go together. 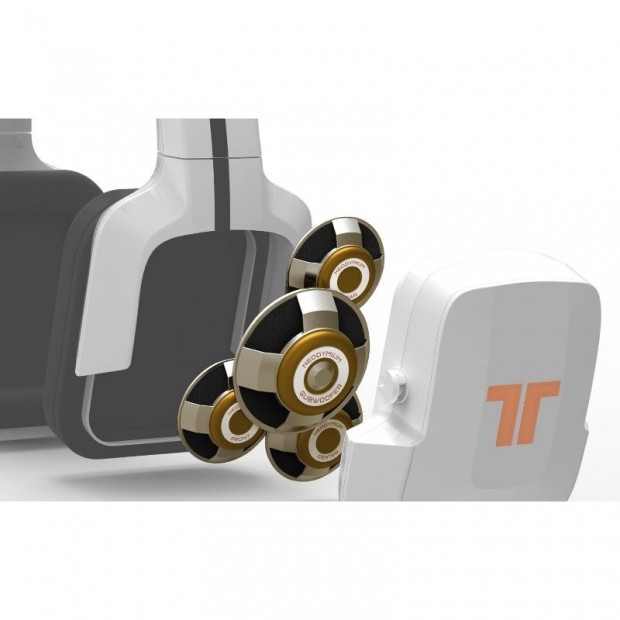 After getting some game time in I started streaming some Netflix as well as watching a couple DVDs and removed the microphone which locks on but is easy to take back off.  There is just something about Dolby Digital Surround Sound which just makes everything SO much better.  When you don’t have it you think “meh everything sounds just fine, I don’t need it” which has been our case since we don’t have a surround sound system in our living room.  Then playing games or watching movies with the extra dynamic in sound makes it hard to go back to not having it.  I purposely chose shows and movies with dramatic soundtracks or explosions and got so into them I nearly jumped out of my skin when someone walked into the room.  Removing the vibration feature for a subwoofer was an excellent move and the configuration of the speakers physically places the sound in the locations needed for surround sound truly recreating the experience. 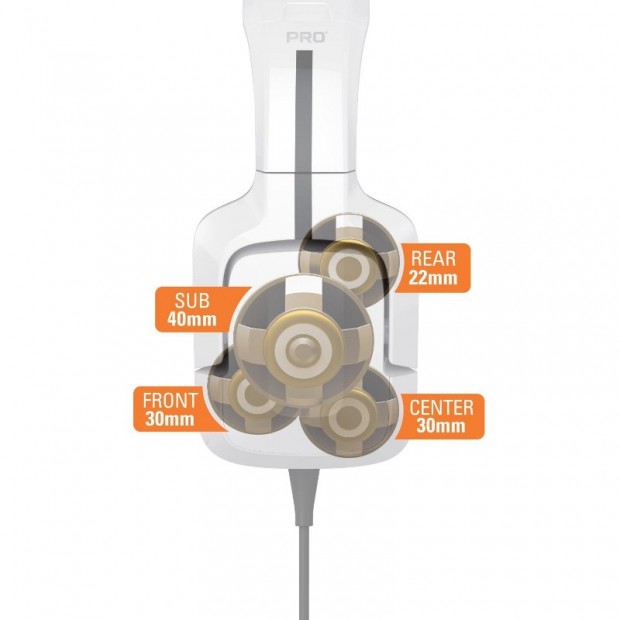 The box lists compatible devices with this model of the headset as being the XBox 360 and Playstation 3 but since I read it was PC/Mac compatible in Europe I decided to plug it into the PC and see how it works.  During this entire writeup I have been listening to a bunch of my favorite songs with the headset on, trying ones with dynamic sound and ones with bass to make sure I wasn’t missing anything.  I have been in my own world of writing and music thoroughly enjoying all at a nice level without waking up sleeping members of the household. 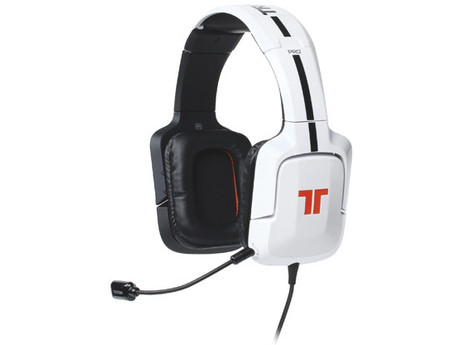 All this time testing on different devices brings up comfort as well which is insanely important during long term gaming sessions.  The headset is truly lightweight and comfortable with padding around the ear cups and at the bottom of the bridge where it makes contact with your head.  I could almost see getting caught up in your own thoughts and walking away from the computer/game system with them still on.  Luckily you have 12 feet of cord to realize what you are doing before they will get yanked off your head.  Usually I have a complaint about wired headsets due to them limiting the range from your device at which you can play but this longer than normal cord length is quite comfortable. 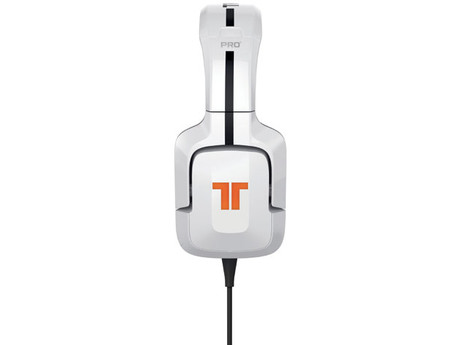 Appearance really shouldn’t matter that much in a headset since performance is really what makes or breaks it’s effectiveness but I would be remiss to not point out the new angular white shell on the headset which looks like it could be a part of a stormtrooper’s gear.  I had it sitting next to my Star Wars XBox 360 and a clone trooper bobblehead and it looked damn sexy.

The Tritton AX Pro+ 5.1 Surround Headset is the only headset you will need from now on.  It is perfect for gaming, movies, music, anything you could want the headset for and it’s connectivity allows the freedom to use it where you want.  I plan to do some traveling with my Xbox 360 and laptop in tow, and this headset is definitely going along for the ride!