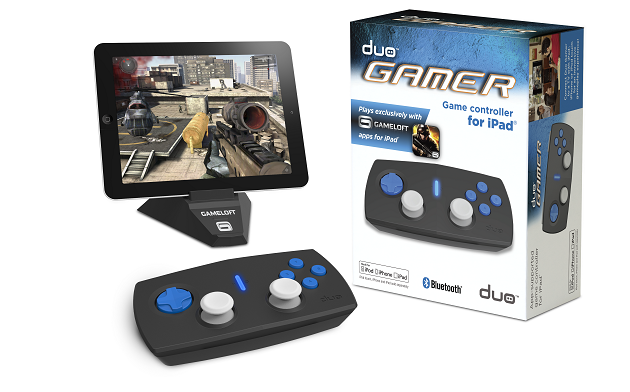 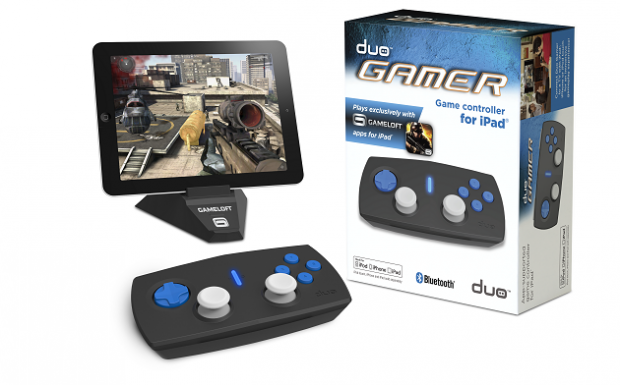 The Duo Gamer is a Bluetooth game controller for the iOS platform  The controller is made from a durable, hard plastic and feels like it could take a beating. The package also contained a simple plastic stand for your iOS device to rest on so that you can prop it up for a more console-like experience. The stand may be simple, but does the job it was designed for without issue. It even has a cutout in it to run a charge/sync cable through. For an even greater console-like experience, you can attach an HDMI cable and run your device to a television set. The package also contained a nice, felt pouch to hold the Duo Gamer while in transit – although, our pouch string did not contain any kind of locking mechanism for cinching. I am unsure if our pouch is defective or that’s just how they come – hopefully, they all have cinch locks of some kind.

Pairing the Duo Gamer to my iPad was very easy – simply hold the power button on the controller down for a few seconds and the device appeared in my iPad’s Bluetooth device window. After its first paring, a window appeared, directing me to some of Gamelofts titles which support the controller. As it stands right now – only Gameloft titles are supporting the Duo Gamer. Thankfully, that means that you get a nice array of titles of varying genres to try out until the company releases some more or perhaps makes some deals with other game developers.

I was able to try out a couple of the first person shooter games in the Gameloft library as well as Order & Chaos Online. All the games performed remarkably well with the Duo Gamer and the two analog sticks feel really natural to control. The biggest problem I had with the Duo Gamer was the form factor of its upper section where the bumper buttons are located. For the FPS titles, the bumper acts as a trigger and, due to the shape of the controller’s corner, is slightly annoying to depress – especially when cranking out rounds with your character’s pistol. Hopefully Duo will update the design at some point but the issue should not deter you from purchasing now – you get used to it.

Overall, I would definitely recommend the Duo Gamer controller for any iPad gamer interested in taking their Gameloft titles to a new level. The overall experience is very console-like and will hopefully show hardware and software makers that the realm of iPad gaming has only reached the tip of the iceberg. The Duo Gamer will retail for $79.99 when it is released on October 5th at various retailers such as Amazon, Best Buy, and even the Apple Store.