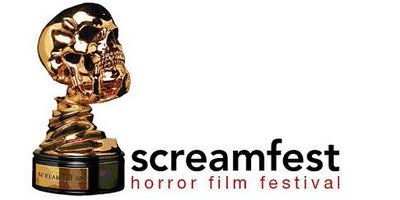 Los Angeles, CA., September 25, 2012 – Screamfest® kicks off its 12th annual festival on Friday, October 12 at 8:00 p.m. with the opening night horror The Collection, directed by Marcus Dunstan (writer of Saw IV, V, VI and Saw 3D: The Final Chapter). Screamfest®, the preeminent horror festival in the country, and what the LA Weekly calls “the best place to get a jump on tomorrow’s cult hits” presents the festival in Los Angeles on October 12 through October 21 at LA Live Regal Cinemas (1000 West Olympic Blvd., LA, CA).

From the writing-directing team Marcus Dunstan and Patrick Melton (Saw IV, V and VI) comes The Collection, a suspense horror film with nonstop thrills at every turn. Directed by Dunstan and starring Josh Stewart (The Dark Knight Rises, The Collector), Emma Fitzpatrick (The Social Network) and Christopher McDonald (“Boardwalk Empire,” Requiem for a Dream), the film centers on a traumatized man forced to help rescue a beautiful woman who has become the latest obsession of a crazed killer who “collects” humans in a booby-trapped house of horrors. Both Dunstan and Melton will be in attendance for the opening night screening as well as cast members Josh Stewart and Emma Fitzpatrick.

When ELENA (Fitzpatrick) is talked into attending an underground rave party with her friends, she finds herself caught in a nightmarish trap where the revelers are mowed, sliced and crushed to death by a macabre series of contraptions operated by a masked psychopath. When the grisly massacre is over, Elena is the only survivor. But before she can escape, she is locked in a trunk and transported to an unknown location.

Fortunately for Elena, one man-ARKIN (Stewart)-knows exactly where she’s headed, having just escaped from there with his life and sanity barely intact. Going back is the last thing on Arkin’s mind, but Elena’s wealthy father (McDonald) hires a crack team of mercenaries to force Arkin to lead them to the killer’s lair. But even these hardened warriors are not prepared for what they encounter: an abandoned hotel-turned-torture-chamber, rigged with deadly traps and filled with mangled corpses. Can Arkin and the team get to Elena before she too becomes part of his gruesome “collection?”

The film is written by Dunstan and Patrick Melton (Saw IV, V, VI, Saw 3D: The Final Chapter) and produced by Liddell Entertainment and Fortress Features. LD Entertainment is releasing The Collection on November 30th.

Look for additional titles to be announced soon.