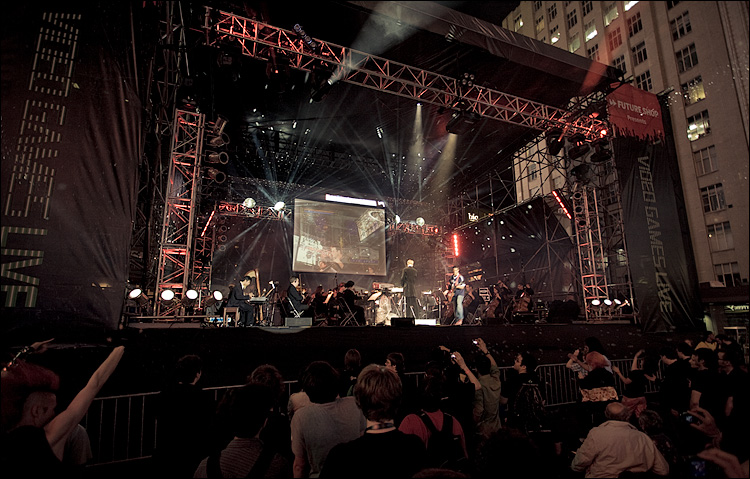 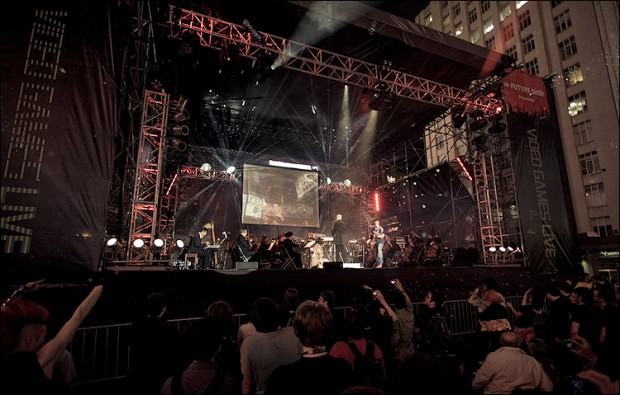 HOLLYWOOD, CA – MAY 29, 2012 – Heralded by the LA Times as “Ingenious and fantastic!” and proclaimed “Captivating and bombastic!” by the NY Times, Video Games Live has once again teamed up with E3 (Electronic Entertainment Exposition) and the ESA (Entertainment Software Association) to continue its 8 year tradition of pulling out all the stops for its annual Los Angeles show by announcing a cavalcade of special guests, first time ever music premieres, industry stars, new interactive technology, and incredible prizes.  The performance will take place on Wednesday, June 6th at the Nokia Theatre positioned directly across the street from E3, the game industry’s most important annual event.

Aside from fan favorites such as Castlevania, Halo, Sonic and Chrono Trigger/Chrono Cross, audience members will be treated to new live premieres from such titles as the award winning The Elder Scrolls V: Skyrim®, the 90’s cult classic Earthworm Jim, the Billboard and iTunes chart topping music from Journey, as well as Blizzard Entertainment’s Diablo® III, and upcoming World of Warcraft®: Mists of Pandaria™.  The original composers will be making appearances and performing on stage with over 110 musicians.  Video Games Live will be celebrating the 25th Anniversary of Street Fighter with its hard rocking symphonic Street Fighter II medley including special guest appearances.  To celebrate the recent induction into the Classic FM Hall of Fame (at #16 of all time!), Nobou Uematsu’s Aerith’s Theme will be presented in a new exclusive symphonic Video Games Live arrangement.  The newly created Pokemon Symphonic Suite will be making its Los Angeles debut as well as some very special guest performers for the award winning song “Still Alive” from Portal.  Original Toto founder/songwriter/pianist/vocalist David Paich and friends will be joining the symphony and choir to perform “Hold the Line” alongside the winner of the pre-show Guitar Hero competition.

A variety of YouTube superstars will also be performing including America’s Got Talent finalist and internet sensation Lindsey Stirling known for her amazing cinematic music videos viewed by tens of millions of people online which include her top featured Legend of Zelda medley.  Video Games Live favorite Martin Leung (“the Video Game Pianist”) will once again grace the stage to debut his new piano arrangement of classic Rare Software favorites such as Banjo-Kazooie and Donkey Kong Country.  Laura “Flute Link” Intravia will be showcasing her vocal talent as well as performing her 25th Anniversary Zelda arrangement with the symphony along with her new Mario flute medley.  Heavy Metal guitarist Viking Jesus will invade the stage and conquer the audience with the world premiere of his pedal to the metal rendition of Star Fox.

From the beginning Video Games Live has always been an interactive show and this year that interactivity is taken to a new level.  Aside from randomly chosen audience members appearing on stage to play a game while the orchestra provides (and changes) the soundtrack on-the-fly, Video Games Live will now incorporate members of the audience to help chose the setlist during the show by texting and/or using their Smart Phones.  A real-time meter will show which games are leading during the show and the most popular choice will be the one performed.  Other interactive elements will include live Skype appearances and interviews with game industry legends and photographs of the audience taken during the performance and posted on the Video Games Live Facebook page for tagging.  The first 50 people to tag themselves during the show will receive a free copy of “Ghost Recon: Future Soldier”.

Audience members for this performance will be a part of gaming history!  Since its creation in 2002, the award winning Video Games Live continues to break attendance records around the world, and after 10 years in business and hundreds of shows, yet another prestigious award and record will be bestowed on stage with an induction and certificate ceremony from Guinness World Records for the most video game concerts ever performed.  Twin Galaxy founder Walter Day will be presenting a special trading card to commemorate this record breaking show with all audience members receiving a free copy of the card.  Pac-Man World Record Holder and crowned Video Game Player of the Century, Billy Mitchell (known for his role in the movie King of Kong) will also be present to unveil his limited edition Video Games Live hot sauce.

Incredible door prize give-a-ways from Samsung, AMD & Intel (including laptops, hard-drives, media devices, software and much more) will be awarded on stage during the show to lucky winners (any ticket holder will be able to enter).  The ever popular pre-show costume contest will be in full effect as each costumed member will be brought on stage as the audience decides the winner by volume of applause.

“Since starting VGL in 2002, this particular show is turning out to be one of our most exciting and spectacular shows ever!” stated industry veteran and Video Games Live Creator/Executive Producer Tommy Tallarico.  “There really is something for everyone in this show no matter what era or genre of gaming you’re into.  Being partnered with E3 and the ESA allows us to bring the entire industry together for a complete celebration of the gaming world.  If ever there was a Video Games Live to attend, this is the one!”

TICKETS ARE ON SALE NOW and range from $25 – $75 with a limited number of Ultimate VIP Backstage Experience packages.