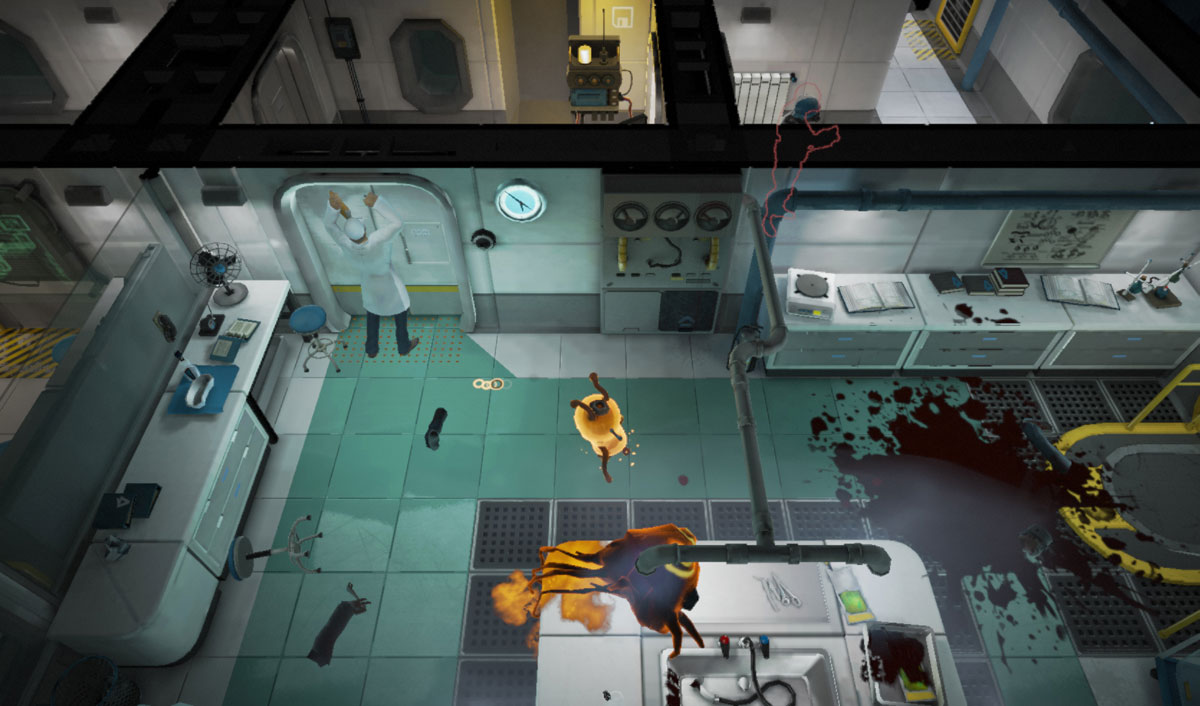 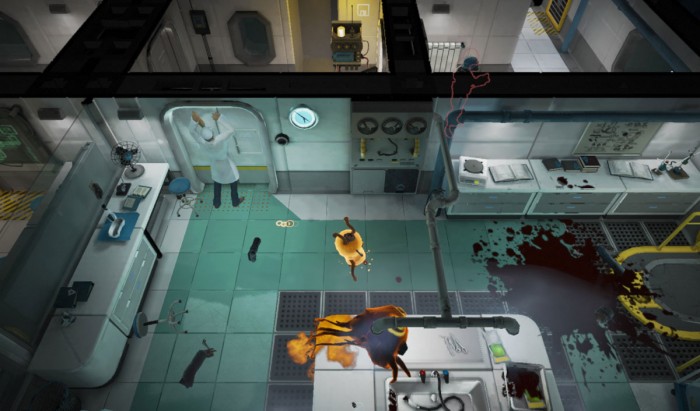 Some genres of video games get a bad reputation because of some really bad examples, and I feel that the stealth game genre is the prime example of this.  If done right, the stealth game is a fun and exciting way to go through many hours of game play, but if done wrong, it’s just a frustrating mess that most people just don’t have the patience for.  Splinter Cell and Tenchu Stealth Assassins are some examples of great stealth games while Velvet Assassin being a good example of a bad stealth game.  So that brings me to my review of Warp from developer Trapdoor, a science fiction stealth game that puts you in the role of a captured alien trying to sneak out of a underwater science facility.  Where does Warp fit into my hierarchy of stealth games?  Let’s take a deeper look at Warp and find out.

The story of Warp is fairly basic and straightforward, but really helps explain the game play choices that the developers made during production.  Your space ship crashes on Earth and you are captured by a secret scientific research group and taken to their underwater laboratory.  Your equipment has been taken away and you are kept in a weakened state while the scientists run tests on you, including the dreaded “maze” test that all scientists seem to love.  By eating grubs that the scientists feed you, you slowly gain your strength back enough to earn your first power up, teleport.  This allows you to escape the laboratory and begin making your trek to the surface and to freedom.

As stories go, Warp’s story is a great example on how story writing can make the game play choices that was made for the game make sense.  The alien is weak at first and must find more power ups in order to escape the lab, all due to the tests that the scientists ran on him (or her, it’s not all that clear).  The story even takes place in an underwater facility, which helps explain why the alien just doesn’t teleport himself outside to escape.

Warp’s game play is a combination of top down classic stealth, like the original Metal Gear, with puzzle solving and a sly sense of humor.  You use your gained abilities to escape the laboratory by solving the puzzle obstacles in your way and by not being caught by the lab’s security force.

The puzzles and obstacles that you face in Warp can be overcome by many different solutions, which really allow the player the choice and flexibility to play the game as they see fit.  For example, the player can choose to hide in canisters and teleport from canister to canister to avoid a security force, or they can choose to teleport into a security officer and erupt their insides, or can even cause the other officer’s to kill their own comrade.  Warp also has a talent system, like most role-playing games out on the market, that allows you to boost certain abilities to make solving the puzzles much easier.

One knock on stealth games is the constant restarting of an area if you are caught.  Warp does have a steep penalty for mistakes, your alien creature is not very durable and will be killed in one shot if seen, but the checkpoints for Warp are conveniently placed so that death feels much more like a small bother then a catastrophe.

The games play flows through Warp without many issues, though some of the boss fights I found terribly annoying, especially the last one.  These issues aside, I felt that Warp was a very solid and good example of what the stealth genre can be.

This is where developer Trapdoor cut some corners, in the area of aesthetics.  The graphics won’t win any awards, but help make the game moody and gives it that underwater claustrophobic feel, which is much needed.  However, the scientists all run around with masks on, saving the developers money in actually having to create separate models for each person.  The one person that does not wear a mask isn’t animated to speak at all, so that his mouth stays still while he is speaking.

The developers also hired only one voice actor for every person in the game, and that is fairly obvious from the beginning.  It isn’t a game breaker, but it does become annoying hearing the same guy over and over again throughout the game.  I understand that this is an Xbox Live title and not a production with a huge budget, but these items are what keep Warp from being truly great, instead it’s just good.

Warp is a good game that would have been great if it had much more money for production.  The story makes perfect sense when combined with game play elements, and has that sense of humor, which is needed in games like this.  The game play allows the player to solve the obstacles and puzzles their own way and allows you to build up your alien according to the way you want to play the game.  Warp auto saves your progress in the right places, so that you never feel like death is a massive punishment that makes you redo an entire section of the game over again.  The downside to Warp is that the developers did not have a lot of production money to create this game and it shows in the aesthetics.  None of the models show their faces and the one character that does is not animated in the mouth area, so that he speaks without moving his lips.  There is only one voice actor for every human in the game, which did save the developers money, but makes the enemies feel flat and have no character to me.

Overall, Warp is a very good stealth game, definitely the best stealth game out right now for the Xbox Live Arcade, but it’s low production costs prevent it from being truly great by giving us some questionable aesthetic choices.