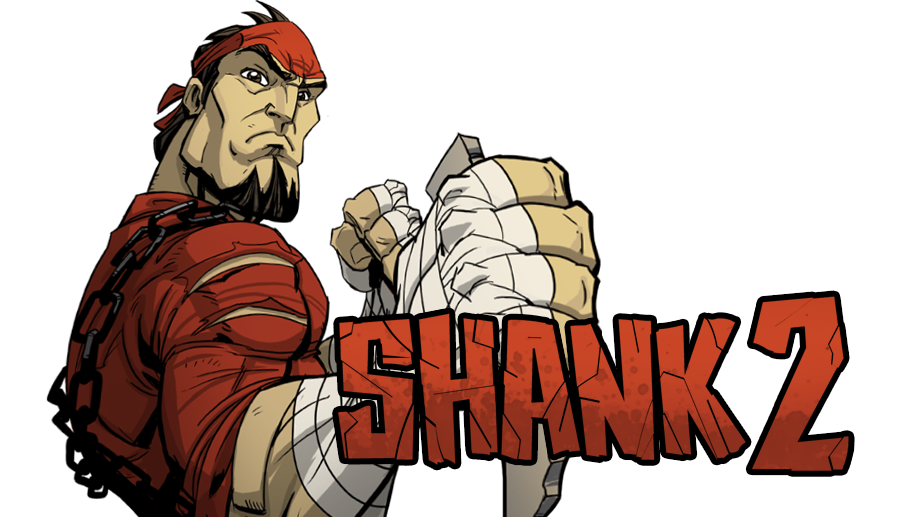 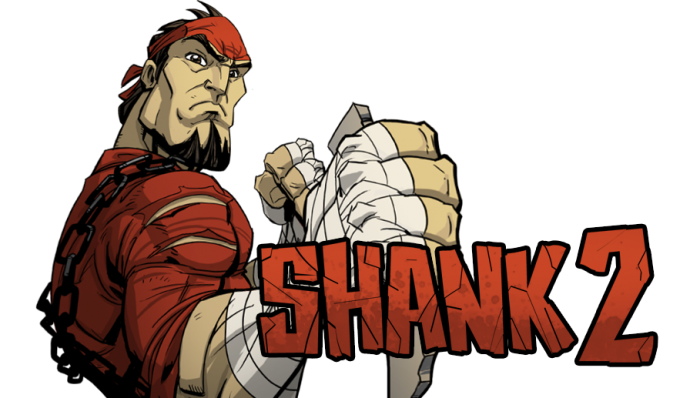 Developer Klei has brought its bloody 2D brawler back to Xbox Live Arcade with the release of Shank 2.  Sequels are always in a funny position with me, be it video game sequels or movie sequels.  You always hope that the sequel is better then the original, but more often then not, the sequel just let’s you down and can’t deliver on what the original brought.  Will Shank 2 deliver a better experience then the original Shank, or are we looking at just another effort to get your money out of your wallet?  Let’s find out with my full review of Shank 2 for the Xbox 360.

Ok, let’s get this out of the way first; it’s Shank so the story is going to take a back seat to the bloody 2D side scrolling action and game play.  I knew this before diving into the game for my review, but I still want to discuss how much or little the story of Shank 2 impacts your experience.

The story picks up with Shank taking a South American holiday, where he runs afoul with the local militia.  Shank then starts killing said militia for no other reason then the fact that one of them knocked his whiskey bottle out of his hands.  Shank fights his way to the local bar, finds another whiskey bottle, then discovers that the militia is still pissed about Shank killing so many of their number that they took one of his estranged friends hostage.  Shank once again starts his bloody killing spree in order to rescue his friend and destroy the militia in the process.

The story of Shank 2 doesn’t make much sense, nor does it have to.  The story, or lack thereof, did not impede on my enjoyment of eviscerating my way through to the end of the game.  The story is there just to give you some context as to why Shank is in South America in the first place and why he’s gutting hundreds of hapless militiamen and women.  The story is definitely the weakest link in Shank 2’s armor, but playing Shank 2 for it’s enthralling story line is like playing Minecraft for it’s stunning graphics, you’re just doing it wrong.

Shank 2’s game play is much improved over the original.  The controls feel much more fluid and gives you much more of a feeling of being in complete control over Shank’s actions.  Switching up weapons during a combo is very easy and leads to many more satisfying kills, and even countering the enemy’s attacks has been made easier with the addition of a flashing exclamation point whenever the enemy is ready to attack.

Dodging in Shank 2 is also much improved.  With just a flick of the right stick, Shank will now roll out of the way of an incoming attack gracefully, then will get right back up to continue his murder spree.  Klei also improved on how Shank heals himself, by mapping the heal items to a different button then the attack buttons.  It’s much easier to pick up a bottle of booze to heal yourself without accidentally attacking, which would prevent you from healing yourself.

Local co-op for the campaign has been killed this time around, and it’s really a good thing.  The campaign is fairly short and easy to beat alone, so with a friend you would blow through it way to quickly.  Instead, Klei has come up with co-op survival mode that can be played locally or over Xbox Live.  Survival mode is a nice way to try to keep the life in Shank 2 well after the campaign has been finished, but for me it gets stale fairly quickly.

Overall, the game play of Shank 2 is vastly superior and improved to the original game play of Shank.  Klei really listened to the criticism and complaints that came up during reviews of Shank and set out to improve what was wrong.  The downside to this is that Shank 2 just feels like an improved version of Shank, without really being a sequel or adding anything more then just patching up the original’s issues.

The visuals and voice acting for Shank 2 are almost identical to what they were in the original Shank.  Visuals are still cell shaded to give the violence in Shank 2 that cartoon feeling while still being violent and bloody as the original.  The voice acting still does the job in Shank 2 as well, not being Oscar worthy, but definitely not the worst voice acting that I’ve heard either.

When it all comes down to it, Shank 2 feels vastly improved and plays better then the original Shank in regards to game play.  However, what you really get is just more of the same.  If you liked Shank, then that’s not a bad thing at all.  It is an improvement over the original in regards to Klei fixing the problems that people had with the first game, but other then that Klei really didn’t put much more work into the sequel.  I would recommend it highly if you liked the first one or if you missed the original, especially for the price tag of $10, but if you are looking for a bigger experience then what the original gave you, you might be disappointed.