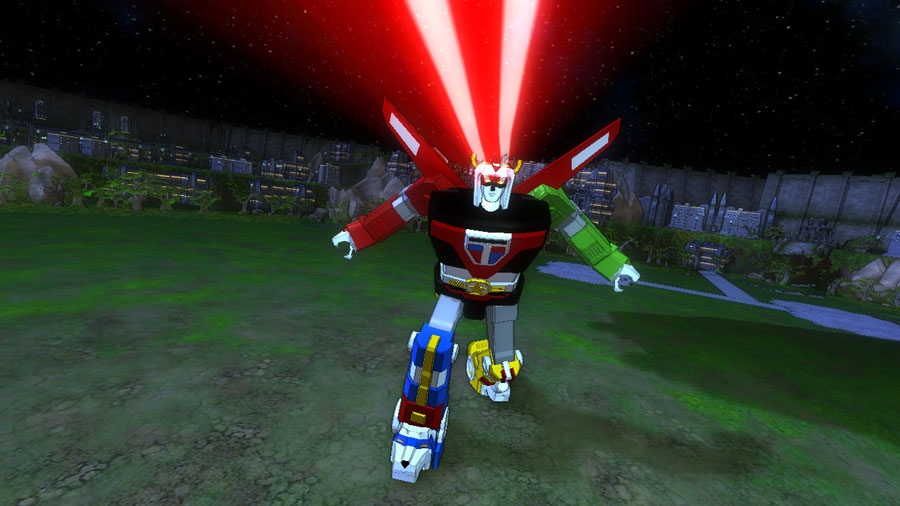 Voltron: Defender of the Universe – A Review (XBLA) 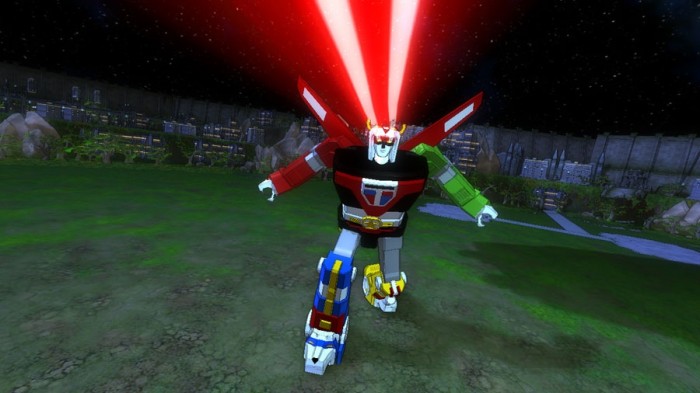 THQ and Behavior Interactive have brought to the Xbox Live Arcade a game that I would have killed for as a kid during the 1980’s with Voltron: Defender of the Universe.  Unfortunately, nostalgia alone could not make this title the huge hit that I wanted it to be.  With repetitive game play, quick time boss battles, and bad quality control in the voice acting, Voltron: Defender of the Universe falls short of a good game and ends up directly into the mediocre pile of XBLA titles.

The story for Voltron: Defender of the Universe is where the game really shines, but still has some problems with the line up that it wants to have in regards of characters.  The game follows four old episodes of the original Voltron cartoon from the 80’s.  Each episode begins with a cut scene from the original television show to give you a brief glimpse of the story line.  The attempt to make the game feel like the television show really worked for me – you even get Peter Cullen giving us the commercial break messages any time you press pause.

The player gets to select one of the five lions to play as, with the original pilots in each lion.  That’s right, in the beginning Princess Allura does not pilot the blue lion, but Sven does.  Then, during episode two’s cut scene, the Princess appears to pilot the blue lion while Sven continues to do the voice acting as you play the game.

The main plot follows King Zarkon’s invasion of the planet Arus, accompanied by his son Lotor and the witch, Haggar.  Voltron successfully repels the invasion and follows up with a rescue mission helping out another planet invaded by Zarkon, ultimately chasing down Zarkon to his home planet and defeating him as a robeast.

Overall, the story is the best thing since it closely follows four of the original story lines from the old television show.  Voltron: Defender of the Universe really falters heavily though in the areas of game play and aesthetics.

Voltron: Defender of the Universe focuses its game play solely around the twin stick game play of games such as Robotron.  One stick moves the lion around and the other stick shoots the lion’s top gun.  You also have one button to jump and one button to do a melee attack, but the majority of your moves center on the two-stick control scheme.  For me, this control scheme worked well enough.  I never once had any control issues in any of the levels and found that the game play actually worked for the game at hand.   It was the rest of the game play that I took issue with.

The game ultimately becomes a grind fest through the levels.  Each level consists of moving to a waypoint, defeating enemy units, then moving to another waypoint to defeat some more enemy units.  Sometimes, the game will change it up with a defend section where you need to defend a castle or a dreaded escort quest, helping citizens escape the area.  After a couple of levels of this, you begin to realize that this is the entirety of the game play for Voltron: Defender of the Universe, and that’s not a good thing.

At the end of each episode, you get to form Voltron with your lion.  This is where the game really disappointed me, since the entire robeast battle is done using quicktime events.  The cartoon sequence that was shown in every episode starts to play and you must move the sticks in concert with the symbols on the screen.  If you fail, you just don’t get the points for that movement.  There isn’t any consequence in this stage for failing to hit the right sequence.  Once you finally form Voltron, then you get to select one of four attacks, then must time the button press right in order to successfully cast the attack.  Oh, and don’t worry if you miss it, because when the robeast attacks, you’ll get the chance to counter his attack and do damage.  You can conceivably just use the counter attack method and still defeat the robeast.

Multiplayer is fun to play in Voltron, maybe even more fun then just the single player campaign since you get to blaze through the levels quicker with more lions.  I experienced no lag at all over Xbox Live, but this could not save the overall experience of the game.

Remember quite a few years ago, developers discovered cell shaded graphics and thought that this was the greatest thing since sliced bread?  Well, Behavior Interactive thought so too and used cell-shaded graphics for Voltron: Defender of the Universe.  Normally, I wouldn’t be so against it for this type of game, since cell shaded graphics really do have a place in the comic book or the cartoon genres, but with Voltron, it just looks like it was done very cheaply and without polish.

The lions in the game also never seem all that impressive.  The game’s visuals is done in the standard three-quarter view, but the lions look more like small toys then the giant mechs that they are.  Behavior Interactive really had a hard time here with getting the size right on all things concerned.

The sound of Voltron: Defender of the Universe was more then adequate for the job at hand.  The voice-overs sounded almost perfect, if not exact to the original actors of the television show.  The music was good but in the long run, forgettable.

Voltron: Defender of the Universe was the game that my inner child really wanted to like, but in the end the video gamer in me really had to take apart piece by piece.  The graphics felt cheap overall and not done well, while the game play was much more of a grind then needed and really did nothing to excite me at all.  The story line was decent, but then again it followed the original television show’s episodes, so you really couldn’t mess that up, while the voice acting was very close to the original source material.  In the end, Voltron: Defender of the Universe is a passable and mediocre game that would be fun for one play through by an old fan, and nothing more.