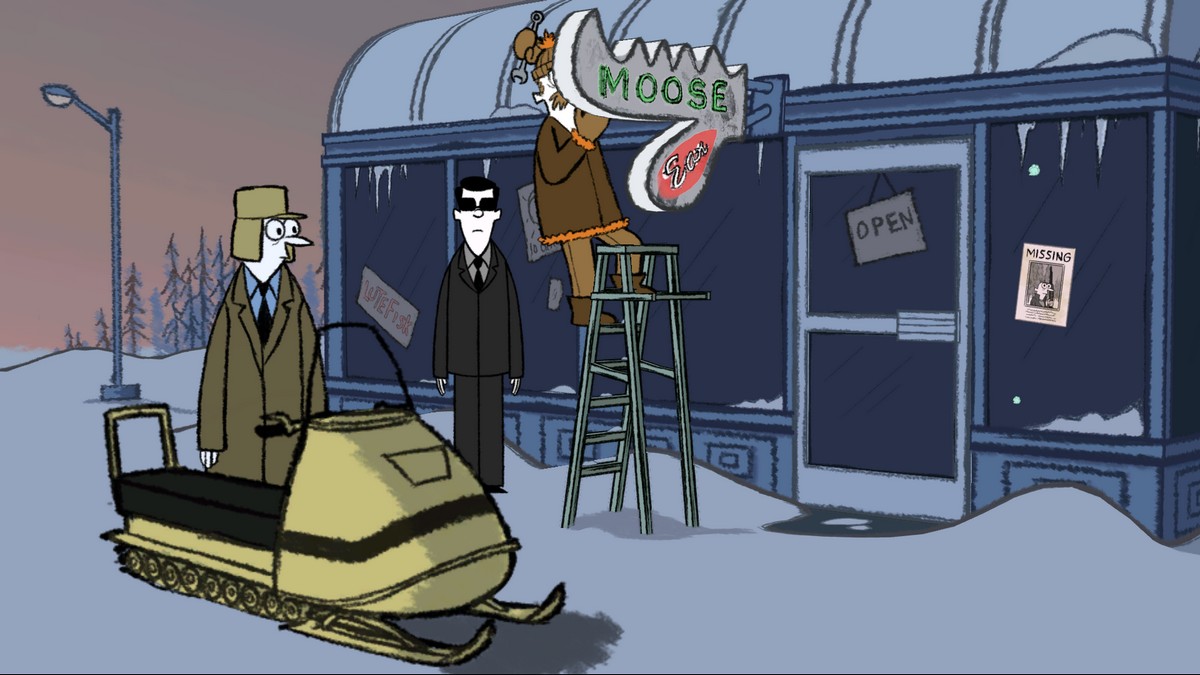 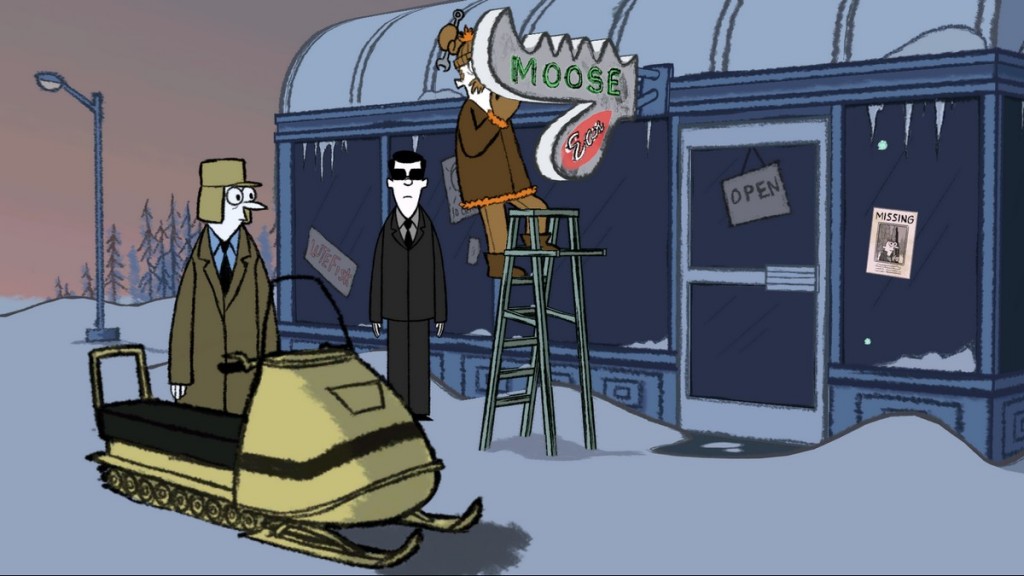 Telltale Games brings us the sequel to Puzzle Agent, the aptly named Puzzle Agent 2.  Taking up where Puzzle Agent left off, Puzzle Agent 2 brings us a greater variety of puzzles to solve while trying to find out about the rash of disappearances in Scoggins, Minnesota.  Having never played the first Puzzle Agent, I was interested in Puzzle Agent 2.  Having been reviewing a lot of point and click adventure/puzzle games lately, I felt that my puzzle skills were at the top of their game and was ready for the challenge.

Puzzle Agent 2 picks up where the original Puzzle Agent left off.  You play as Agent Tethers, FBI agent in the Bureau’s Puzzle Department.  Agent Tethers was not pleased on how the Scoggins case closed in Puzzle Agent.  Tethers was able to reopen the eraser factory, but was unable to find out where the missing people of Scoggins were or who was behind their kidnappings.  In Puzzle Agent 2, Tethers uses his own vacation time to go back to Scoggins to complete his investigation and to find the missing people of the town.

The town of Scoggins, Minnesota is full of interesting and, let’s be blunt, mostly crazy characters.  It is clear from the beginning that the inhabitants of Scoggins doesn’t want Agent Tethers poking around their town again.  It is also clear that the townsfolk have issues, serious issues.  From conspiracy theorists that believe the government is crossbreeding Sasquatch with humans, to the mysterious Brotherhood of Scoggins that believes in the Hidden People, forest gnomes that live in the area, Agent Tethers is forced to wade through their insanity to get to the bottom of this mystery.

The story works well to pick up where, I assume, Puzzle Agent left off.  I never did play the first one, so walking into this game, I needed to know what the first one was about, and Puzzle Agent 2 does a good job of getting you up to spend through dialogue.  You are able to talk to the inhabitants of Scoggins to catch yourself up with the story so that new players are caught up without having to play Puzzle Agent, and the older players are reintroduced to the world of Agent Tethers.  The story is interesting and well written, and has that Telltale Games flavor to it.  Without getting into the details and spoiling the story’s ending, the story starts off straight enough for a investigation game, but takes many twists and turns and ends in insanity, literally.

Puzzle Agent 2 is, at heart, a point-and-click puzzle game.  However, unlike many of Telltale Games releases in the last year, you have absolutely no control over Agent Tethers within a scene.  The game is set up with no movement controls at all.  You enter a scene, then use your mouse to click on items or areas of the scene, and a radar-like circle expands from the spot you clicked.  If there is anything of interest within this circle, you will see it and then are able to click on the item.  You can open up dialogue boxes with characters, find puzzles, exit the scene, or collect gum pieces from around Scoggins.  The controls are very simple, but work brilliantly.  It is kind of hard to mess up the controls to a point and click puzzle game, so don’t expect too much here in that department.

Puzzle Agent 2 is all about the puzzles!  The inhabitants of Scoggins are obsessed with puzzles and Agent Tethers is a crack puzzle solver.  During the game, Agent Tethers will be faced with a puzzle that he must solve in order for the story to continue.  These puzzles will either block his entry into a building he needs to go, or appear in dialogue boxes so that he can gain some hidden knowledge about the case.  The puzzles have a nice variety to them, with only a few types repeating throughout the story.  Most of the puzzles are fairly easy to comprehend and solve on the first get go, but some require much more thought and the game gives you a handy clue system.  You can pick up gum pieces throughout Scoggins and these gum pieces give you access to clues during the puzzles that you need to solve.  You are allowed up to 3 clues during a puzzle, though your overall score will be lower depending on the amount of clues you use or the amount of times you tried to solve the puzzle.  Some of these clues are very helpful, some are infuriatingly not helpful, so it all depends on your level of puzzle solving skills.  Mine are mediocre on a good day, but were sufficient enough to solve most of the puzzles in Puzzle Agent 2 without problem.

Puzzle Agent 2 does not bring anything new or exciting to the genre, but it does it well enough and keeps you interested.  The puzzles are varied enough for you to not get bored with repeats.  The clue system works well enough, but does expect that you have some previous knowledge, like knowing Pi up to 10 places.  Really, Pi to 10 places, all I could remember was 3.14, curse you Telltale Games for showing me my math deficiencies!

Puzzle Agent 2 is completed in almost a cartoon-like visualization.  Think South Park, with a bad frame rate and bold black lines.  The characters move like there are frames missing in between motions, so it almost gives you a flip book feel.  The art direction is that of a Sunday newspaper comic, the characters are stylized with bold, black outlines.  It’s a neat look that works for the game, though it took  a while to get used to the intentional frame rate issues with the characters movements.

The voice acting is where Puzzle Agent 2 really shines in the aesthetics department.  The voice overs are truly fantastic, making each character you meet interesting and alive.  The actors seem to have a good time doing this game and really put some effort into the dialogue delivery and accents.  Since the game is located in Minnesota, we get a variety of accents that you would find there, really making the game feel just right.

The graphics aren’t top notch, but the story and voice acting easily are brilliant enough for the game to pull the player into the world of Agent Tethers and makes it interesting so the player wants to continue to play.

Puzzle Agent 2 is a very solid point and click puzzle game.  Though you really have no control over the movements of Agent Tethers, the game plays quite well and gives you enough of a variety of puzzles that you will not grow bored.  Sure, the hint system can be frustrating at times and some of the puzzles are down right brutal, but Puzzle Agent 2 is a good time.  Telltale Games does another fantastic job in hiring voice actors that truly care about delivering a great performance, and these actors are given great characters to bring to life.  Puzzle Agent 2 does come up on the short side in length, but for a $10 game, it is worth the price of admission