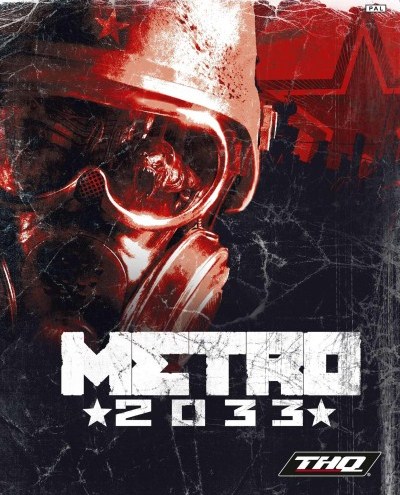 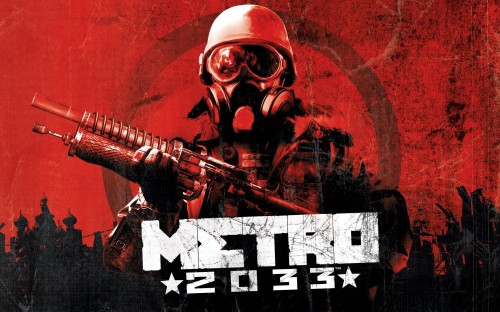 2033 will not be a good year for human beings if Metro 2033 has captured our future right, but it is a good time for gaming.  Based on the 2003 (get the year?) book of the same title by Dmitry Glukhovsky, Metro 2033 is set in a bleak underground world beneath a frozen wasteland that was once a thriving city and takes us to the dark edges of survival where every bit of light is welcome and almost everything that goes bump in the dark wants you dead.  Though it mostly takes place in poorly lit tunnels where corpses abound, the game never really seems to repeat the same scenery and for such a bleak environment it is very rich in detail, every section tells a story even if it is not the one you are traveling through.  You may stumble upon the corpse of a apocalypse time soldier and by the destruction around him and the blood smears on the ground you can figure out how he died even though he has become nothing more to you than an ammo bucket.  The game is incredibly rich in such details, visually and audibly, making it quickly immersive especially if you find yourself like I was on an addicted marathon play of it through the night.  The darkness is not just darkness, it is danger and oppressive doom and in every shadow you may find a reward in the form of a cache of weapons or you may have something knocking you on your back and chomping at your neck trying to tear it out.  It has lots of jump factors but doesn’t just rely on them.  The mutants though very canine like will sometimes stand erect on their hind legs and look at you and let out a long woeful wail.  After which mutant beasts descent on you from all directions. 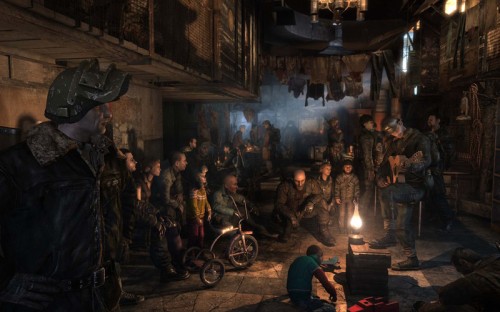 The game isn’t all doom though there isn’t much that doesn’t have gloom. There are sparks in the dark in the form of soldiers, like yourself, and others who still hold out hope for humanity winning.  More often than not you will encounter what you would expect to see in such an environment, the mutants truly aren’t mankind’s only enemy.  There are those who want to rule, warring factions who can’t give up their grudges just because they have a common enemy, those who prey upon others in times of disaster, all the bad elements of mankind that we would expect to rear their ugly heads in our greatest times of need.  This game provides them all, well created and very believably, almost sadly believable and they prove obstacles on your journey as well.  Without giving away the story too much your journey could almost seem a bit simple for what trials you have to endure but they show the character of the character you are playing and proves to be a value of their own. 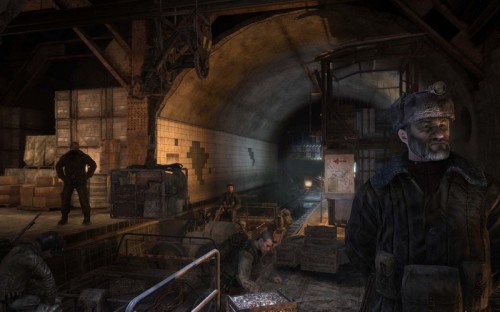 Resources are very scarce in the game so weapon upgrades and ammo are cherished and sometimes used sparingly.  There were a few times where I found myself relying on my knife rather than my gun in some dangerous battle because I knew something nastier was around the corner and I needed to make every round count.  Ammo is so valuable that it is currency in the game, the pre-apocalyptic military grade ammo is the coin of the land so when you get it you have to decide do you buy a weapon upgrade or more of the inferior mutant day ammo or is your survival in this situation dependent on some well placed shots with some good rounds?  It is a choice you have to make throughout the game and you definitely want to not take it lightly. Use up too much of the better ammo and you could find yourself wishing you had it when some scavenger in one of the few lit and populated train stations, the only bastion of civilization left, offers you a shiny item for the military ammo you have left.  Another tip I learned the hard way, check all the scavengers in these hubs before you purchase, you may be excited to see new weapons to be had, but sometimes you might find something to provide light in the dark of the tunnel. 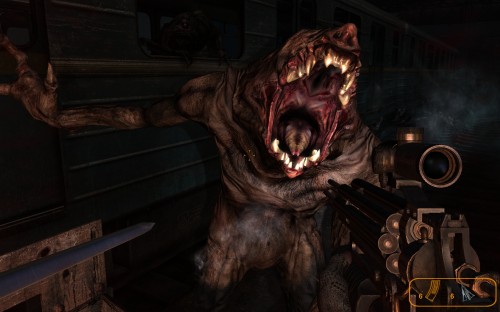 Since ammo is so valuable and scarce sometimes avoiding the conflict all together is the best way to go, though usually not the only way.  The game is good about giving you options on how to get past situations.  Generally what it does is present you with a situation such as a bunch of guards sitting around listening to their commander speak.  You are watching from the dark and all the choices on how to proceed is up to you.  You can try to cling to the ever present shadows and try to slip down the stairs to one side.  You could try to take up a offensive position and start tearing them apart.  You can take a defensive position and pick them off as they separate after the meeting.  You can try walking past them and hope to get back into the shadows before they see you.  Literally all these options are available to you and there is no wrong choice, some are more difficult than others, but they are all up to you.  This freedom to clear obstacles is one of the most addictive parts of the game and had me playing the same sections over and over just curious how each scenario might play out.  I wasn’t alone in my fascination of it either, the OnLive system has a feature called Arena in which people can spectate on other player’s games to see if they like it or to cheer or jeer them on.  During the hours I played Metro 2033 I don’t think a single minute went by (no exaggeration) where I didn’t have a spectator watching the game and most of the ones that left wound up coming back to watch some more.  The game isn’t just addictive to play it is also addictive to watch. 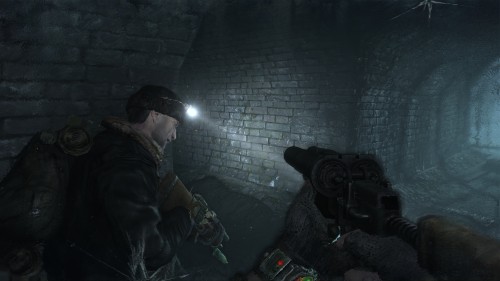 Few games are absolutely perfect and this one had it’s occasional issues.  Sometimes with the animation you couldn’t tell something was dead already and so wasted a few extra shots of ammo though this might have been intentional.  Melee combat can be awkward with your swipes appearing to land but missing entirely or the enemy walking right through you to suddenly be behind you even if you are in a dead end with no side to side movement room which in a first person game in particular can be frustrating when you find yourself trying to fight something basically underneath you.  For the most part though these issues are very easy to overlook.

Metro 2033 paints a dark future for mankind with little sparks of light traveling through it though not all of them with bright intentions.  The atmosphere is immersive and addictive, the gameplay mechanics and situations are extremely enthralling.  I picked this game for the little bit of talk I had heard about it before it came out and I am extremely glad I did.  It has replayability due to the great number of possibilities in each scenario and each play through will be over 10 hours.  I think this game might be one of the best plays of the year and I know it is probably one of the best stories, heck I plan to order the book now.  Now if they would only make a video game based on World War Z… 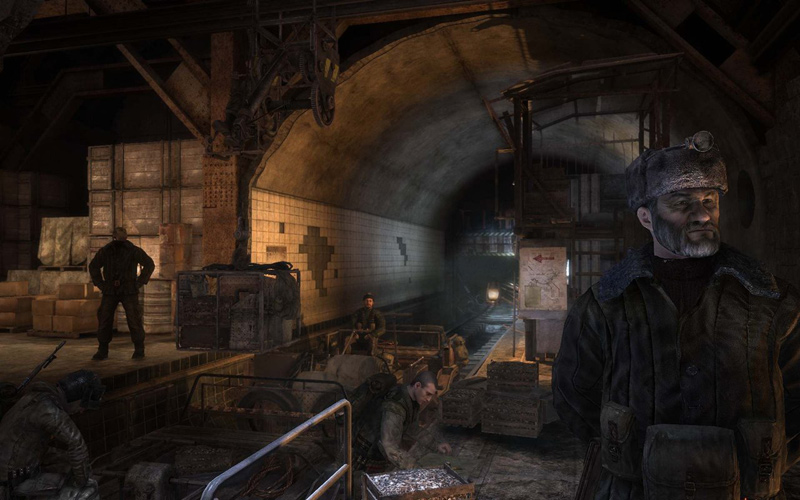 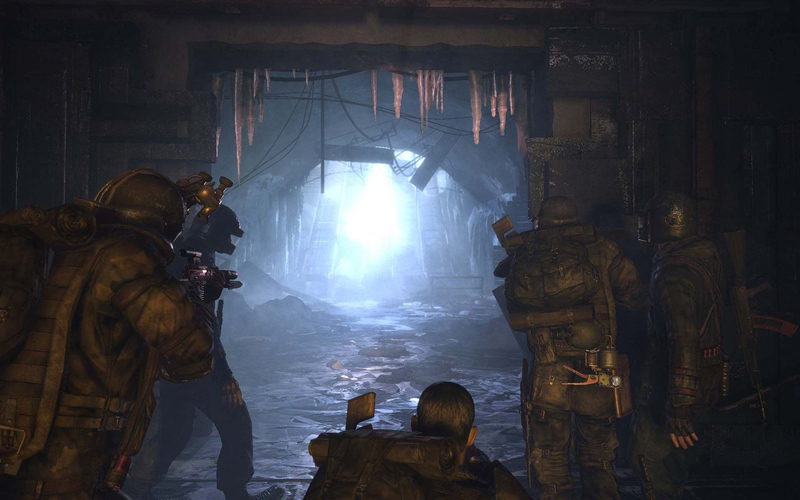 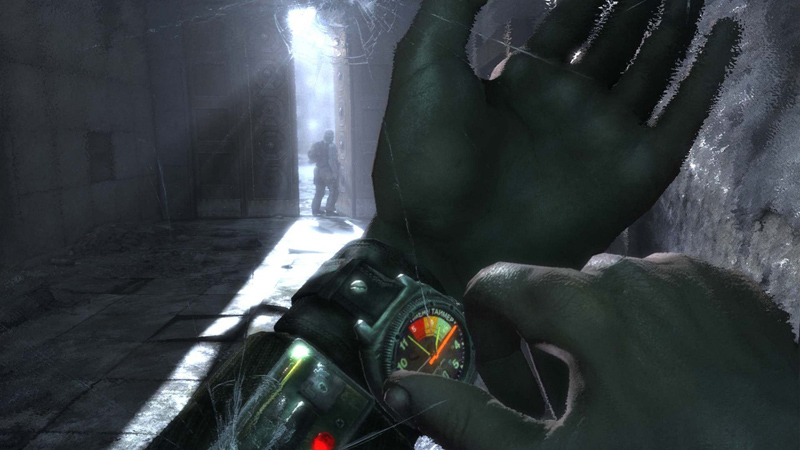 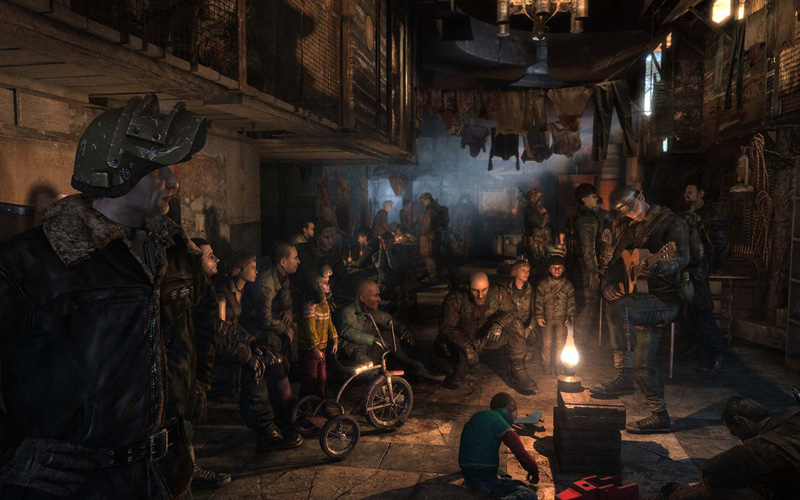 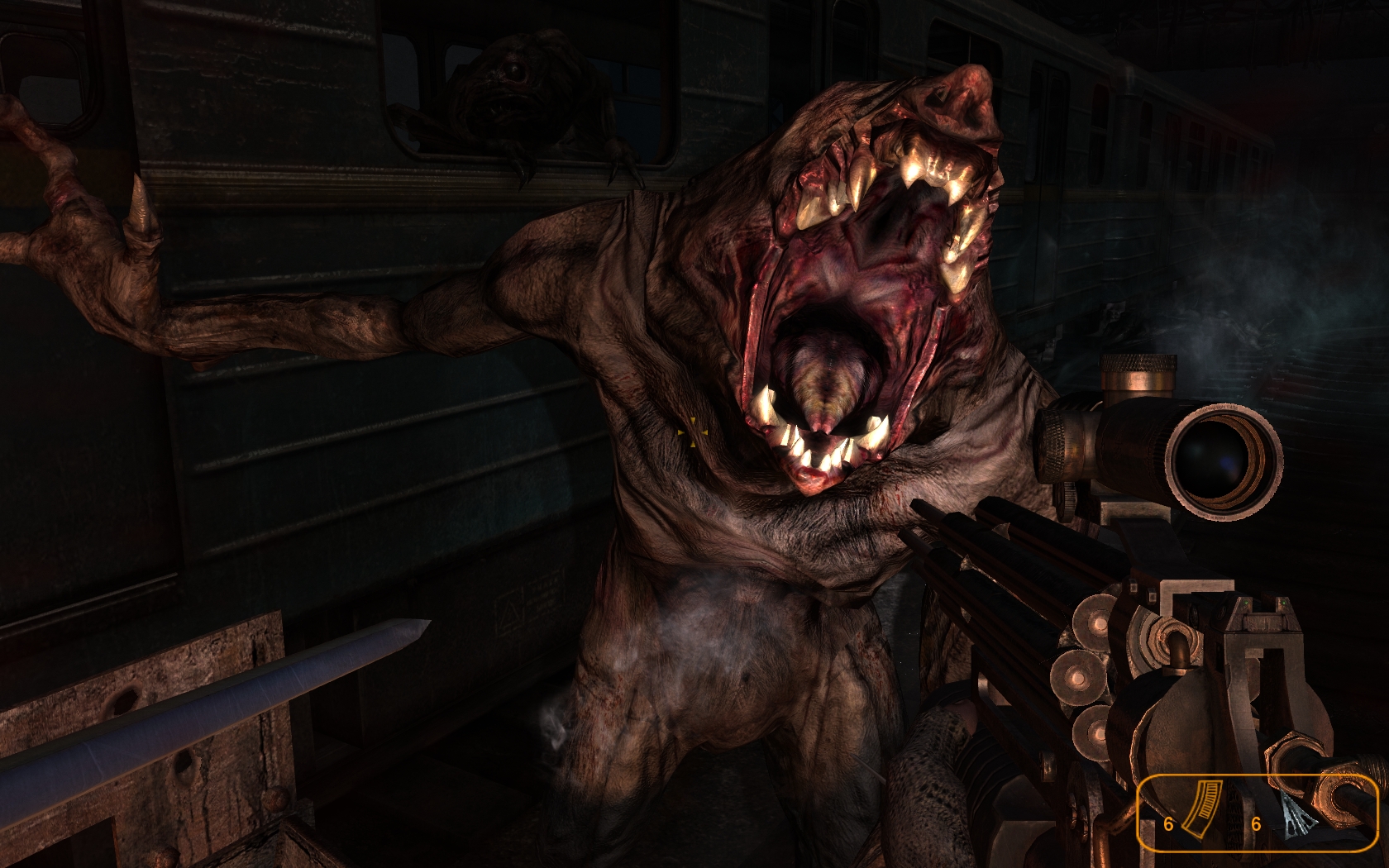 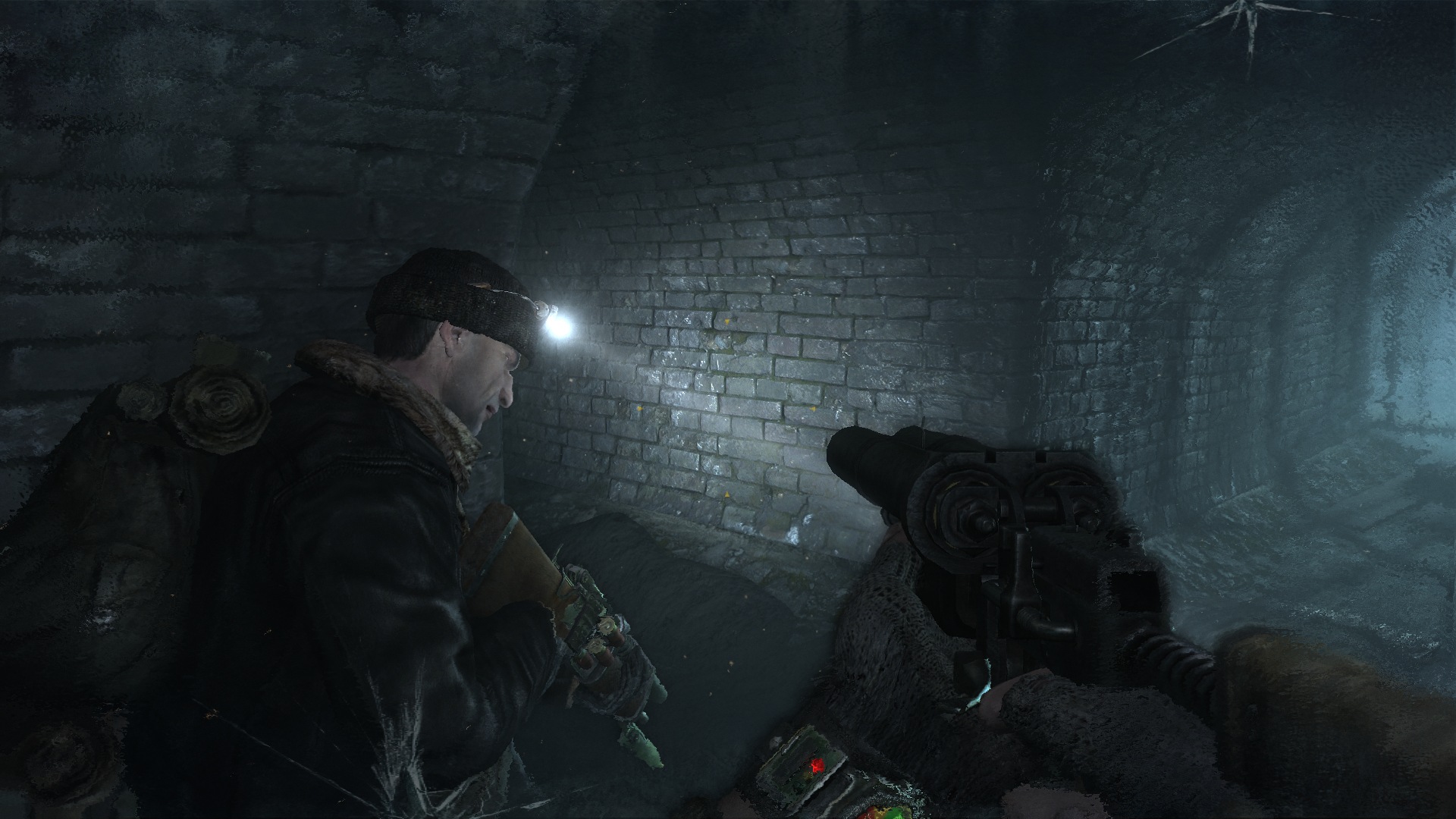 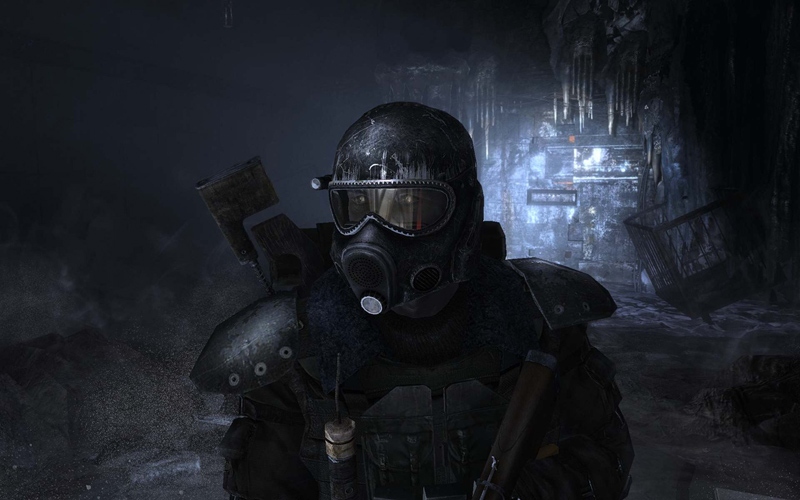 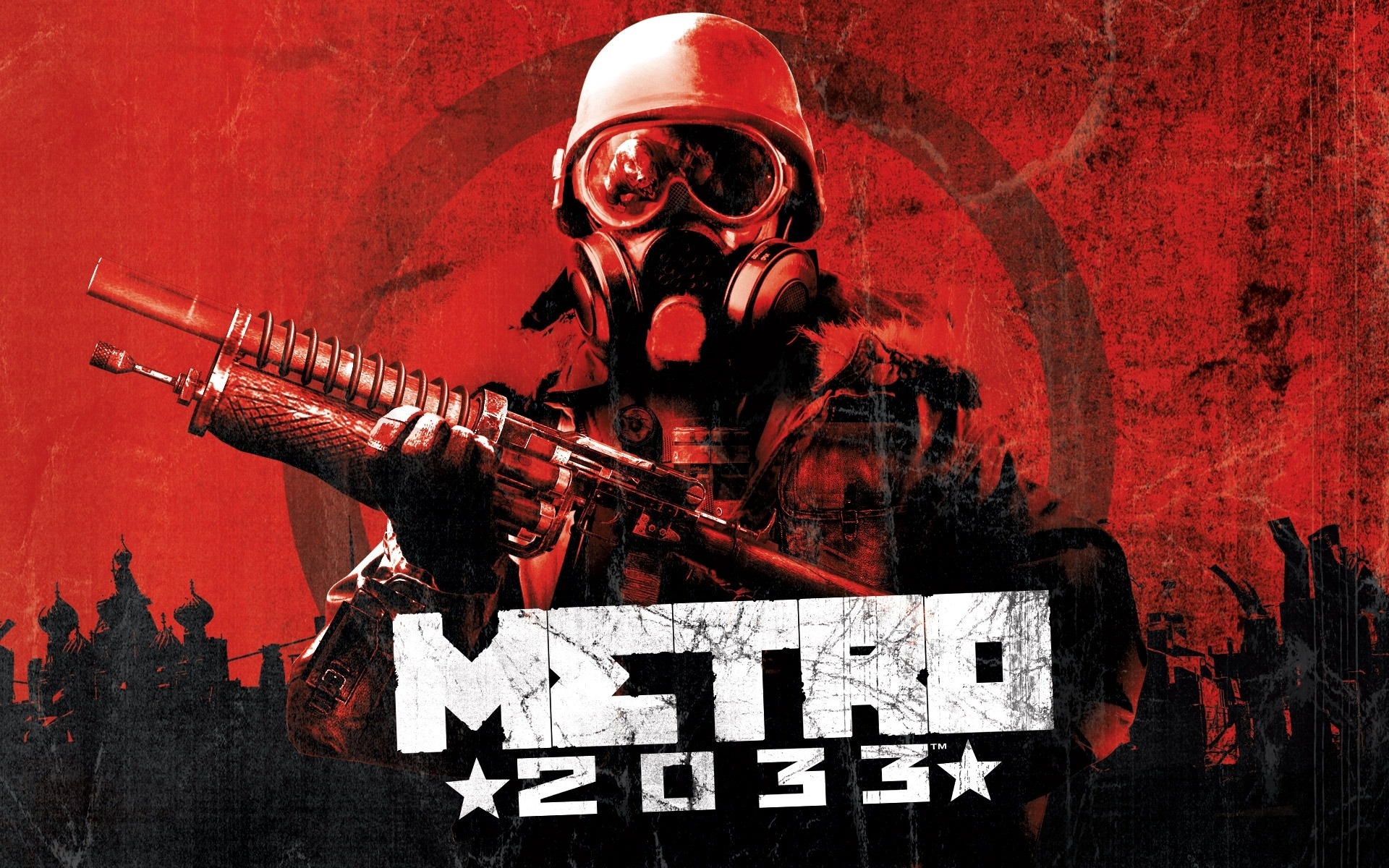