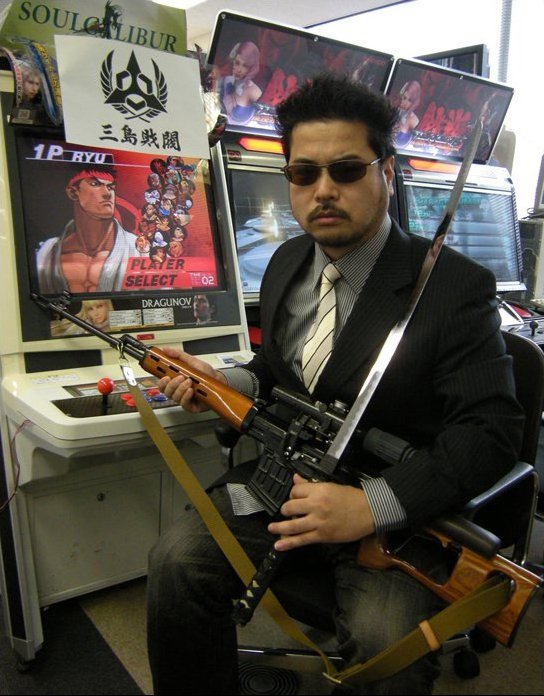 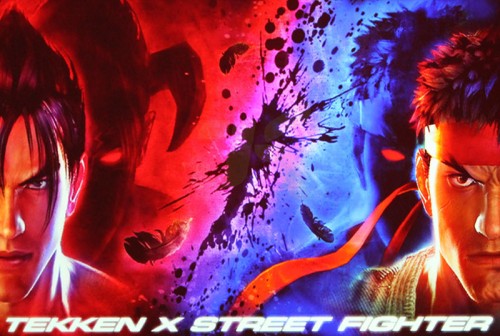 I showed up at the Bandai Namco complex at E3, yes I called it a complex because there were two floors, lots of meeting rooms and tons of kiosks.  I stood in the wrong spot for a bit before I even realized there was a check-in desk at the front of the complex where they called up the representative assigned to you and took you back into the section you need information on.  There they would lead you to a meeting room, a demo room, or a kiosk with the games you need to see.  It should have been chaotic but they had it running like a well-oiled machine. I found myself teamed with another journalist who was there for the same information I was and we were whisked, much to my surprise, into one of the meeting rooms.  There sitting across a table from us and motioning to chairs was a face I recognized from years of gaming news and reviews.  Katsuhiro Harada, Chief Game Director for Bandai Namco Games and the legend behind the Tekken franchise was sitting there.  I tried to keep my face from showing shock as I settled down in a chair next to my fellow journalist and Michael Murray from the development team, who also translated, sat on the other side along with Syouichi Tanaka from Product Management.  They made us feel very welcome and at the end of the interview we even got to go hands-on with Tekken Tag Tournament 2 in front of  the people who made it before they ran off to another engagement.  They left at the last possible moment giving us as much time as they could.  I’d like to thank Michael Murray-san, Syouichi Tanaka-san and Katsuhiro Harada-san for honoring us with their time during such a busy event.

Q: Tekken Tag Tournament 2 is that just arcade or is that going to be on the consoles?

A: Yeah it’s going to be ported to consoles eventually. we’re still working on this one, its about 80% complete.

Q: Is there a timeline when you expect to see that finished?

A: Consoles or for this [gestures to the arcade version]?

A: We can’t really say.  The arcade this will be finished, well released,  sometime in fall of this year and then after that at some point the consoles.

Q: And Tekken Hybrid, there was a lot of stuff going on, there’s the movie and then there’s the games. Is it one package or is it…?

A: So umm, you know we announced the movie first and normally we would have this first in the theaters as a special release and then later to Blu-Ray  that would be the typical marketing approach to that.  But since we’re a game company we want to do something more interesting than that. So on one Blu-Ray, what the Tekken Hybrid is is it’s got Blood…Tekken Blood Vengeance which is the animation. It’s going to be paired with Tekken Tag Tournament 1 HD. The reason for choosing that title is we are just working on [Tekken Tag Tournament 2] and people are really excited about it. And the reason why we made it now is just because its such a huge request from fans to see a sequel. But a large portion of our player population is pretty young, maybe in their teens,  and some of them haven’t played the original. So we wanted to give them a chance to check out [Tekken Tag Tournament 1 HD] and see why it was so popular back then while they’re waiting for us to get [Tekken Tag Tournament 2] to them.  But not only that, we hope to have some other bonus content and some surprises for fans all on one disc.  So that’s why its called Hybrid.

A: Obviously the movie will be more focused on the story aspects where Tag 2 is kind of taking like we did with past installments whether that’s 4, 5, 6 or even Tag 1 and all the evolutions of gameplay we’ve done for each installment and then adding a lot of new features for Tag 2 on top of that.

Q: There’s a ton of new Tekken games coming out with Blood Vengeance and Hybrid and 2 and Street Fighter, is there one that you’re most excited about?

A: Well you know obviously Tekken Tag Tournament 2 was one of the games that [Harada] always wanted to create because of the popularity of Tekken Tag Tournament 1. There was just a lot of obstacles, technology-wise, that we had to overcome before it came out.  But you know its 80% complete for the arcade so [Harada]’s pretty happy with that so far. So [Harada]’s next dream is probably  Tekken X Street Fighter because [Harada] was always a big fan of  Street Fighter and even in developing the past installments [Harada] kind of mentioned to people all along that he’d love to do something with the Street Fighter team. So it really is a dream come true and [Harada]’s been doing that for 16 years and now the 16th year, possible the 17th year of his career  at Namco the Tekken X Street Fighter game will come to life.  [Harada]’s really looking forward to that.

Q: What are the release dates for arcade Tag 2, console Tag 2, the 3DS… just everything?

A: [Harada]’s currently thinking about the best schedule for release dates.  The only thing we can say is [Tekken Tag Tournament 2 Arcade] will be fall of this year. The rest we’re trying to bring out as soon as possible.

Q: Does Tekken X Street Fighter have a release date yet?

A: Not at the moment because its not very far along in development yet. The reason for that is because all those teams currently on Street Fighter X Tekken so there’s really no purpose in taking away from that by doing 2 at the same time. We’re waiting for [the Street Fighter team] to finish on that game and give that its time in the spotlight before we start ours.

Q: How hands on have you been with Tekken X Street Fighter? Hows the collaborative process been?

Well first off for Street Fighter X Tekken [Yoshinori Ono]’s working with that on his team. Of course [Harada] provided them with all the background materials about the universe and our characters and popularity and stuff.  And then we let [Ono] go ahead with that and he comes by once a month with the latest build to show us. But you know [Harada]’s full of surprises, he lets them do their own thing because he doesn’t want to be a limit to their creative process. [Harada] wants to have them do 120% of what they’re capable of.  Our development team as well, we’re all kind of interested to see what each other comes up with.

In our case when we actually go and create Tekken X Street Fighter Ono-san actually has made it clear he’s going to keep his mouth shut in regards to what we’re going to be doing just because if [the Street Fighter team] were giving us instructions or whatever we might have some great idea but wouldn’t really go through with it because we’d be kind of worried about what they would think. We really don’t want to stop each others creative possibilities.

Q: Who approached who for this venture?

A: So [Harada] has been saying for over 13 years now that he wanted to do something with the Virtual Fighter team or the Street Fighter team in all kinds of different interviews all over the place so a lot of people are aware of that.  But they didn’t really go to Capcom and ask for anything. Just happened we were eating Korean BBQ and said it would be really cool if we could actually make something cool together. And that’s how it started.

Q: And those are going to be cross platform and arcade or…?

A: First Ono’s game will come out, Street Fighter X Tekken on consoles.  But Ono-san is saying he would like to make an arcade version as well because that’s what Namco is best at.  So we’ll probably make some arcade versions of that one and of course ours when it comes out.

Q: Will Tag 2 have any new characters?

A: There aren’t any characters who are completely new that no one’s seen for the first time. There are a lot of revivals that a lot of the fans have been asking for. So for example we have Ogre, we have Jin Kazama. Heihachi has drastically changed, he’s gotten quite young as you can see. JC…she has a lot of new moves. We’ve just had so many requests to bring back this character or bring back that character.   [Harada]’s twitter has exploded with “bring back ….”.

Q: Is True Ogre or Devil Jin coming back?

A: True Ogre’s in there. It’s listed as Ogre, but its really the True Ogre, the one with the snake head.

Q: Thanks a lot for the time!