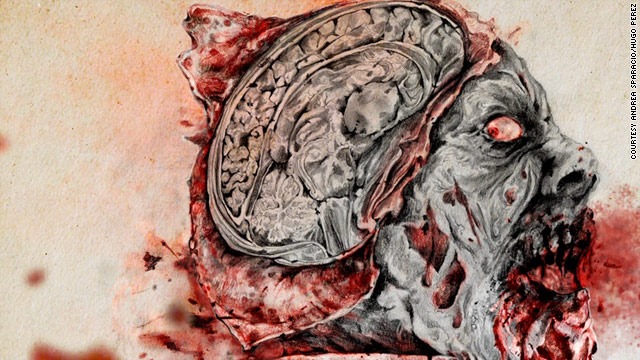 Author Looks at The Zombie Autopsies

CNN reports on a new book titled “The Zombie Autopsies” which takes a look at how the much-talked about zombie apocalypse could actually happen. Written by child psychiatrist Dr. Steven Schlozman, who holds a position at the Harvard Medical School as well as the Massachusetts General Hospital/McLean Program in Child Psychiatry, the book takes a look at what would be needed for a virus to turn normal human beings into devourers of flesh.

What a zombie virus would do to the brain

So maybe you’ve seen “Night of the Living Dead,” read “World War Z,” or can’t wait for the return of the AMC show “The Walking Dead,” but you probably don’t know what differentiates the brains of humans and zombies.

First things first: How does the zombie disease infect its victims? Many stories in the genre talk about biting, but Schlozman’s novel imagines a deliberately engineered virus whose particles can travel in the air and remain potent enough to jump from one person to another in a single sneeze.

Dr. Schlozman will be on a CNN Twitter chat session from 12:00 p.m. ET on Tuesday, April 26. Tweet your questions to @cnnhealth and follow along at #cnnzombies.